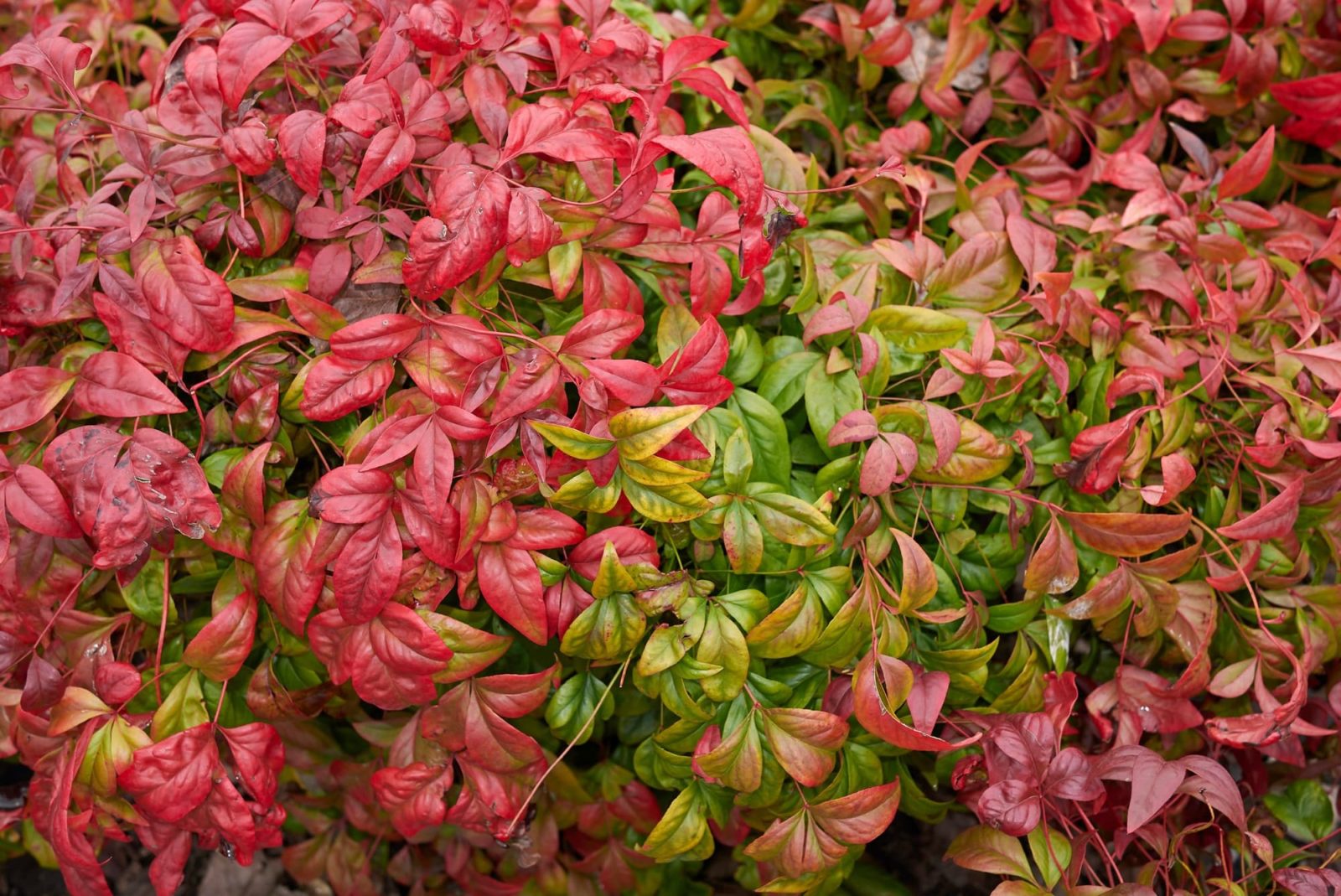 Nandina domestica is an evergreen shrub, characterised by clusters of small white flowers, bright red berries, and pinnate leaves that turn red or purple in late autumn and winter.

This bushy shrub makes an attractive, dramatic addition to a UK garden, whether in borders, as part of a rock garden, or grown in containers. Wherever it is positioned, it will add a touch of the exotic, and provide welcome winter colour.

The plant is winter hardy, and tolerant to high and low temperatures, making it easy to grow in the UK climate. Once established, it requires very little pruning or ongoing care and therefore makes for an easy, ornamental addition to your garden.

To find out more about this fiery-coloured shrub, check out our full nandina domestica growing guide below – it contains all the facts and information needed to grow heavenly bamboo successfully in your garden.

Nandina domestica is a member of the Berberidaceae family and originates from central China and Japan. There are dozens of varieties, with some of the most popular including ‘Fire Power’, ‘Gulf Stream’, ‘Twilight’, ‘Sunset’ and ‘Tuscan Flame’, although only around 10 varieties are common in the UK.

Different varieties produce different colours of foliage, ranging from orange and gold, to red and purple. The leaves change colour throughout the year but are typically red or pink in spring when young, green during summer, and then turn amber, red and purple again, as winter takes hold.

As well as the erect, leathery lance-shaped leaflets, in warm weather the plant also produces white, star-shaped flowers, which grow in large panicles in July and August. The flowers are not particularly showy, but their nectar will still attract pollinators to your garden.

The ‘nandina’ part of the name comes from the Japanese ‘nanten’, whilst the ‘domestica’ refers to the fact that it has been domesticated – the plant has been grown in gardens in China and Japan for centuries.

It is often placed near doorways in Japan, to dispel the bad dreams of the inhabitants, and in Shanghai it is sold in sprays, to be placed on house altars at New Year, in a similar way that holly is used in the West.

Heavenly bamboo was first brought to the UK by William Kerr, in 1804. It was originally kept in greenhouses, until gardeners realised that it was hardy in a UK climate (although it does not berry as profusely in the UK as in other areas).

Nandina domestica is also known as heavenly bamboo, or sacred bamboo – despite not being a bamboo of any kind. This name derives from the fact that it grows upright and erect, in a similar fashion to bamboo.

The plant grows to an ultimate height of around 1.5 metres, and to a similar spread. However, it is reasonably slow-growing and can take up to 20 years to reach this size.

Nandina domestica is hardy in the UK climate and can tolerate temperatures between -23°C to 43°C. It can therefore be left outside year-round, and does not generally need to be protected from frost over winter, unless in a particularly cold or exposed position.

Although it can tolerate low temperatures and partial shade, nandina domestica much prefers full sun, and so you should try to choose an east, west or south-facing location in your garden, if possible. The plant prefers a sheltered spot, away from any cold, drying winds.

Heavenly bamboo will grow in almost all soil types and pHs, including sand and clay – although it does not really like chalk. It prefers its soil to be rich and moist, but, as with most plants, does not like to be waterlogged, so make sure it has sufficient drainage.

Nandina domestica makes an ideal border plant, and many dwarf varieties are also well-suited to container growth. Once established, heavenly bamboo is a low maintenance plant, and requires very little ongoing care. It should not require feeding, fertilising or watering, except in periods of drought.

As mentioned above, established nandina domestica requires little ongoing care – and this includes pruning. Pruning is only really necessary to remove dead wood, or diseased shoots. You may also wish to prune to reshape your plant, to encourage new growth for propagation, or to remove an unwanted plant that has spread underground.

The best time to prune nandina domestica is in mid to late spring, prior to new growth, but after the last risk of frost has passed. Aim to remove any obviously dead, damaged or unsightly shoots. If required, you can also thin the plant out, to improve its appearance. After pruning, water, mulch and feed your plant, to encourage new growth.

When To Plant Nandina

The best time to plant nandina depends on whether you’re planting seeds or cuttings. Seeds should generally be planted into soil in late spring, whilst cuttings should be taken as semi-hardwood in early autumn, and planted immediately into cuttings compost.

Upon planting, you should always water your nandina domestica well, and make sure to keep soil moist but well-drained during the initial growing period.

Nandina domestica’s natural habitat is mostly the mountain forests of eastern Asia, including the Himalayas, central China and Japan. The plant prefers a sunny, sheltered climate for growing, with a rich, moist soil.

In Japan, heavenly bamboo is often grown in pots near doorways, so that when you wake from a nightmare, you can tell the plant about your dream. It is said that the plant will then dispel it, preventing it from hurting you.

The best way to propagate nandina domestica is either by seed, or semi-hardwood cutting. If propagating by seed, you should do this in either mid-spring to early summer, or in early autumn, around September time.

You should prepare the ground for planting seeds by turning the soil over in advance, and covering it with plastic or fleece, to warm the soil and suppress weeds. Rake the surface, and water the soil, then drill small holes using a cane, in which to plant your seeds. Once planted, rake the loose soil back over your seeds. Keep them well-watered whilst they are growing.

If you prefer to propagate by taking cuttings, you should take these during late summer, or early autumn, from the current season’s growth. You can make sure you have plenty of new growth to choose from by pruning the plant back hard that spring.

Choose healthy-looking shoots that are hard at the base, but soft at the tip, and make the cut just below a leaf, using sharp secateurs. Snip lengths of approximately 15 cm. Dip the bottom of the cuttings in a rooting hormone, before planting them into a container filled with cuttings compost. Water well, and keep the cuttings warm and covered until they take root.

Nandina domestica is generally a hardy plant, with few common pests. It may, however, be vulnerable to certain plant viruses (parasitic entities that infect the plant’s cells), which can cause leaf distortion and discolouration.

If your heavenly bamboo has a virus, you may notice browning foliage or spots on the leaves, signs of stunted stems, distorted flowers, or malformed berries. The only way to tackle a plant virus is to remove the infected plant, to prevent it from spreading.

To help prevent plant viruses, propagate new plants from seed, as viruses are rarely spread this way, and only ever propagate from healthy plants. Keep the area around your plant free from weeds, as these can often store infections.

Another problem you may notice with your nandina domestica is leaf drop. This most often happens because the location of your plant is too cold or shaded, or too exposed to the wind. Move your plant to a sunnier, more sheltered position, and it should soon recover.

Nandina is evergreen in most climates, but it can sometimes be semi-evergreen or deciduous in colder areas. In the UK, the plant is generally evergreen, with its glossy leaves turning shades of red and purple in late autumn. This makes it perfect for providing winter colour in a UK garden.

When should I cut back my heavenly bamboo?

Heavenly bamboo does not generally need to be cut back unless you wish to remove it or thin it out. If required, the best time to cut back heavenly bamboo is generally considered to be mid to late spring. This will allow you to cut it back prior to new growth, but mean that any new growth which forms after pruning is not vulnerable to frost damage.

When pruning, aim to remove any obviously dead or diseased shoots, and thin the plant out, to improve its appearance. After cutting back, you should water, mulch and feed your plant, to encourage new growth.

Why is my nandina losing its leaves?

There are a few reasons why your nandina plant may be losing its leaves. It may be the case that the current growing conditions are not favourable to it – for example, the location is too cold or windy. Try moving your plant into a sunnier position, and make sure that it’s sheltered from wind.

If the soil is dry, you may need to water your plant more – particularly if you’re experiencing a period of drought. If this still doesn’t solve the problem, it is possible that your plant is infected with a virus.

Can you grow nandina in a container?

Nandina is very suitable for container growth – particularly the smaller, dwarf varieties. Although the plant is hardy and does not generally need to be moved inside over winter, planting it in a container will allow you to move it around, and reposition the colour in your garden.

For best results, you should plant your heavenly bamboo in a rich, organic potting compost, water it well, and make sure the pot has good drainage, to avoid it sitting in waterlogged soil. When repotting a nandina, make sure not to plant it too deeply – the top of the roots should sit level with the surface of the soil.

Can I prune sacred bamboo in summer?

It is not the best idea to prune sacred bamboo in the height of summer, as this is likely to affect flowering. Instead, prune in late spring after the last frosts, around April or May time, when it will be easier to avoid pruning new growth. You can also wait until early autumn after flowering has finished.