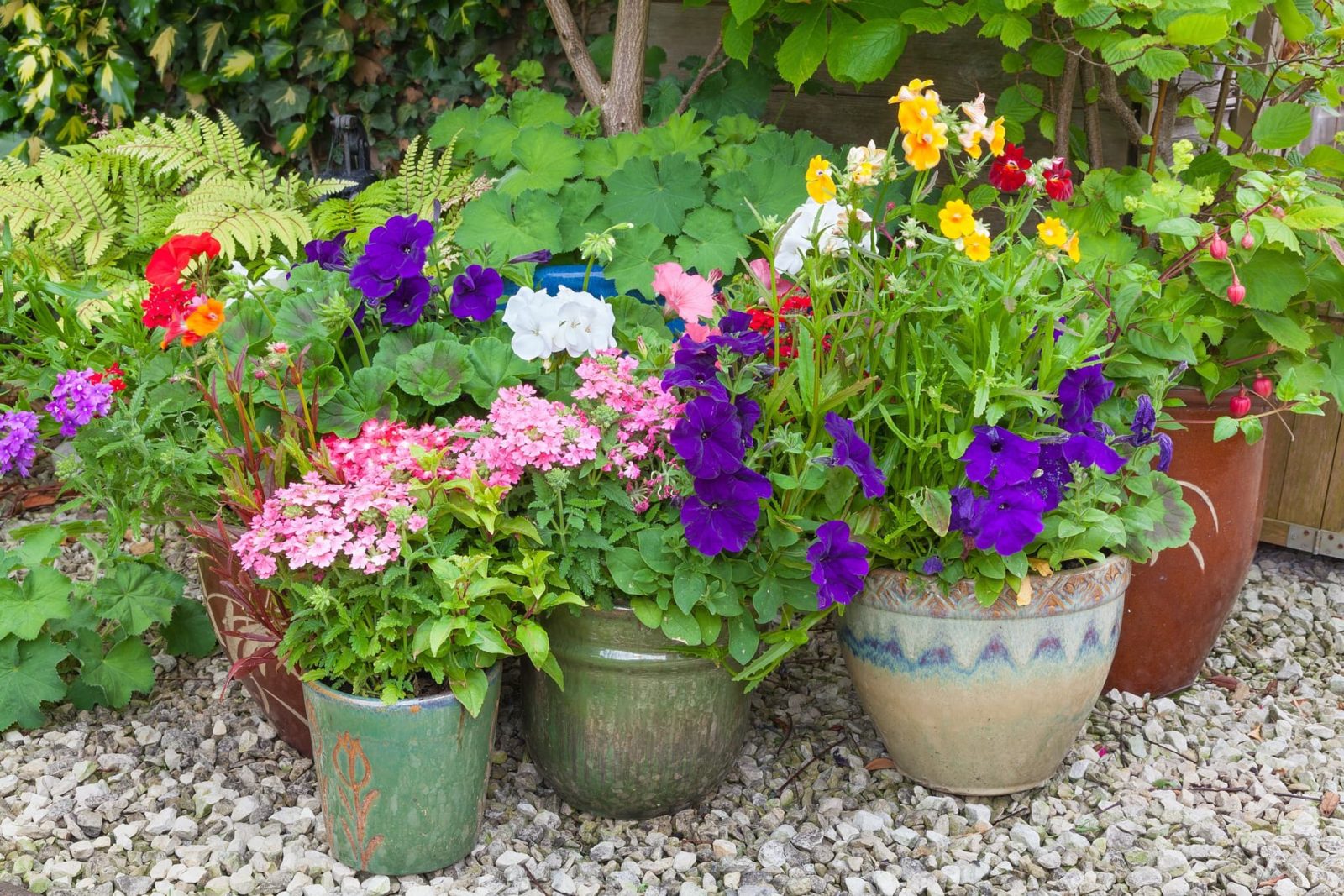 25 Tall Perennials For Height In The Garden

Potted perennials can be a low-maintenance, long-lasting way to brighten up your patio, balcony or garden.

There are a number of advantages to using pots and containers when creating an aesthetically pleasing display in your garden.

For one thing, the mobility of a potted plant lends itself well to easy rearrangement and repositioning, allowing you to mix things up as and when the whim takes you.

Larger specimens in pots can also work well to draw the eye and brighten up drab surroundings.

What’s more, using pots can also be a great way to maximise your options if space is at a premium; even if you only have a balcony to work with, a potted arrangement can really liven up your outdoor aesthetic.

When most gardeners approach the task of choosing plants for their pots, they often opt for eye-catching annuals, which provide a striking impression for long parts of the year…after which, they die and must be discarded.

The problem with annuals is that they require replacement each year, which can soon turn into quite a labour-intensive and expensive endeavour.

Perennials, on the other hand, might represent a greater initial outlay, but they’ll stand you in good stead for a number of years in a pot and can even be transplanted into open soil afterwards to extend their lifespan.

Choose the right plant and you’ll be rewarded with a low-maintenance gift that just keeps on giving, year after year.

As a general rule of thumb, any plant which handles life in a border without too much fuss should be able to cope with life in a container.

All of the plants we’ve chosen below either enjoy a prolonged flowering season, or else have foliage that’s impressive enough all on its own, even without any flowers.

With their cascading explosions of bright green foliage and their delicate, dainty flowerheads atop slender stems, agapanthus make for excellent potted plants, especially when planted inside a terracotta receptacle.

Depending on the variety chosen, they’ll begin sprouting their gorgeous blooms in June, July or August and continue well into the autumn months.

Just make sure they enjoy enough sun and well-draining soil and they’ll pay you back tenfold with their beautiful displays.

Also known as African Lily or Lily of the Nile, agapanthus originally hail from far warmer climes than the United Kingdom. [source]

With that in mind, it’s a good idea to bring them indoors or at least remove them to a sheltered spot (such as an unheated greenhouse) during the colder months to ensure the frost doesn’t do for them.

This attractive perennial grows more outwards than upwards and its low-spreading tendencies make it a popular choice in herbaceous borders.

However, its easy-going nature and year-round vibrancy mean it can work just as well in a pot or container, too.

As the plant expands into its environs, it’ll spill over the edges of its receptacle in a pleasing manner.

Colloquially known as Lady’s Mantle, it’s defined by its palmately lobed leaves which keep their light green colour throughout the year and its greenish-yellow flowers, which bloom in the summertime.

The leaves are covered in an ultra-fine down, giving them an almost silvery sheen, while the plant is at its most impressive shortly after a spell of rain.

That’s because the moisture sticks to the aforementioned hair on the foliage and clings to them in tiny droplets, creating a delightfully pastoral effect.

Bergenia are an attractive addition to any environment, primarily through their floral blooms, which arrive each spring in a burst of white, pink, purple or red, depending upon the specific variety chosen.

However, their foliage is a selling point in its own right, with large, drooping evergreen leaves that earn it the moniker of “elephant’s ears”.

The deep green of the leaves is apt to take on a pinker hue during the colder months, adding another string to the Bergenia bow.

This means that they’re accustomed to temperatures that are far worse than anything Great Britain can throw at them, so they’re fine to be left outside all winter long.

They’re also manageable in size, growing up to around half a metre at full maturity.

For those who are on the lookout for a more dynamic addition to their potted collection, the climbing clematis could be the way to go.

This incorrigible climber will scale any structure you place in or around the container, creating stunning displays of fragile vines embellished with elegant leaves and exquisite flowerheads that have an almost papery appearance and texture.

Clematis are available in a wide variety of different cultivars, meaning you can obtain ones with blue, red and yellow blues, alongside a whole host of different combinations of those three primary colours.

They demand excellent drainage in their soil and don’t take kindly to excessively hot temperatures, so planting them in a container which conducts heat slowly is advisable in order to achieve the best results.

Euphorbias are an incredibly diverse bunch, spanning everything from startling flower-laden specimens to drought-resistant succulent-like species.

The euphorbia milii plant pictured above (more commonly known as “Crown of Thorns”) is one of the more eye-catching varieties of the former type, featuring fantastically graceful flowerheads atop large, rubbery leaves.

Given the breadth and depth of variety on offer among the euphorbia genus, it’s advisable to do your research beforehand and tailor your selection to the specific effect you intend to create.

Whichever type of euphorbia you settle upon, you can expect year-round interest from their foliage and pockets of colourful brilliance when it comes to flowering season.

One look at the brilliant colours, intricate rosettes and long, graceful stalks of a geranium and you’ll soon understand why these gorgeous perennials are popular enough to have their own appreciation society here in the UK.

They’re equally impressive whether placed in a hanging basket, as part of a stunning border or as standalone specimens in containers.

Although often confused with pelargoniums, true geraniums (otherwise known as hardy geraniums or cranesbill) are much more adept at dealing with the colder temperatures of winter. [source]

However, pelargoniums are just as effective in pots as long as they’re relocated indoors when the mercury drops, since they’re highly susceptible to frosts.

Whether you choose geraniums or pelargoniums, you’re guaranteed a fantastic floral display either way.

Hemerocallis are more commonly known as daylilies and are one plant which can actually work more effectively in a pot than in the ground.

That’s because they’re incredibly versatile with regard to their planting conditions, surviving and even thriving in most soil types, but they do enjoy plenty of sun.

As a result, gardeners who enjoy limited sunshine and must chase it around their garden can do so with ease if the plant is potted.

As for their appearance, daylilies are a dream to behold.

With long, thin stems and top-heavy flowerheads, characterised by thick, velvety petals with delicately protruding stamen, daylilies are available in a variety of different colour combinations.

As long as they’re placed inside a container with drainage holes and sufficient space for their roots to spread out, they’ll do just fine in any environment.

Heuchera were once cultivated for the small flowers which bob atop lengthy stems during the warmer months.

However, in recent years, the attention has shifted from their blossoms to their foliage, which comes in all different shades and sizes depending upon the species chosen.

They’re also known as coral bells – for the aforementioned blooms – but it is perhaps their outsized, extravagantly coloured leaves which steal the show.

When it comes to planting heuchera in pots, the main concern for any gardener will be ensuring the soil stays moist but not saturated.

That means plenty of watering during summertime, but adequate drainage in the wetter months.

For best results, elevate the container an inch or two above ground to allow water to flow freely beneath, and mulch their surface lightly during spring to enhance nutrient uptake and reduce the need for constant watering.

While most of the previous inclusions on this list are favoured for their floral blooms, hostas are prized for the interesting and ornamental nature of their foliage.

With a huge selection of hostas to choose from, you can include everything from crinkly variegated leaves to silver heart-shaped varieties in your garden display.

While their leafy allure is the main draw, hostas also often offer pretty and aromatic blossoms in the summer, though these can look tired and unsightly within mere days of blooming, so deadheading is essential for a pristine aesthetic.

Other than that, it’s advisable to choose a spacious pot with excellent drainage in order to allow the hosta to reach its full potential.

Stay away from metal containers, since the conductivity of the material can cause them to overheat in the warmer months.

There’s nothing quite like a bouquet of lavender to add a touch of Mediterranean charm and an aura of tranquillity to any setting.

The plentiful clusters of pale purple flowers will draw bees and other pollinators in their droves, while the delightful aroma of the plant is excellent for imbuing its surrounding with a sense of cleanliness and calm.

There are hardy, semi-hardy and tender varieties of lavender to choose from, so the species you pick should depend not only on the aesthetic you want to achieve, but the amount of elbow grease you’re prepared to put in coaxing your lavender to life.

Whichever variety you go for, choose an amply-proportioned terracotta pot with plenty of drainage holes to plant them in and position it in a semi-sheltered spot.

Penstemon, also known as beardtongue, is a striking plant whose delicate appearance belies its origins on the American plains. [source]

In total, there are more than 250 varieties of penstemon to choose from, with violet, red and yellow blossoms the most popular options among UK gardeners. [source]

Just make sure to plant them in well-drained soil to avoid their roots becoming waterlogged.

Make sure they receive plenty of water in the initial stages after planting, but once they have fully taken hold, only water when the substrate surface has dried out.

Verbena is a beautiful flower that has been used in aromatherapy and herbology for centuries.

It makes a very attractive cut flower and works extremely well in a container, dazzling those who set eyes upon it with incredible floral displays in pink, red, purple, blue or white during the warmer months.

The plant is both perennial and annual depending upon which variety you plump for, while there are also hardy and tender options available.

As such, it’s worthwhile investing time into deciding exactly which species is best suited to your purposes and taking the necessary precautions to protect more sensitive varieties when appropriate.

But furnish verbena with adequate drainage in its soil, around six hours of sunlight per day and a steady supply of water and you’ll be richly rewarded with its charming blossoms in the summer.