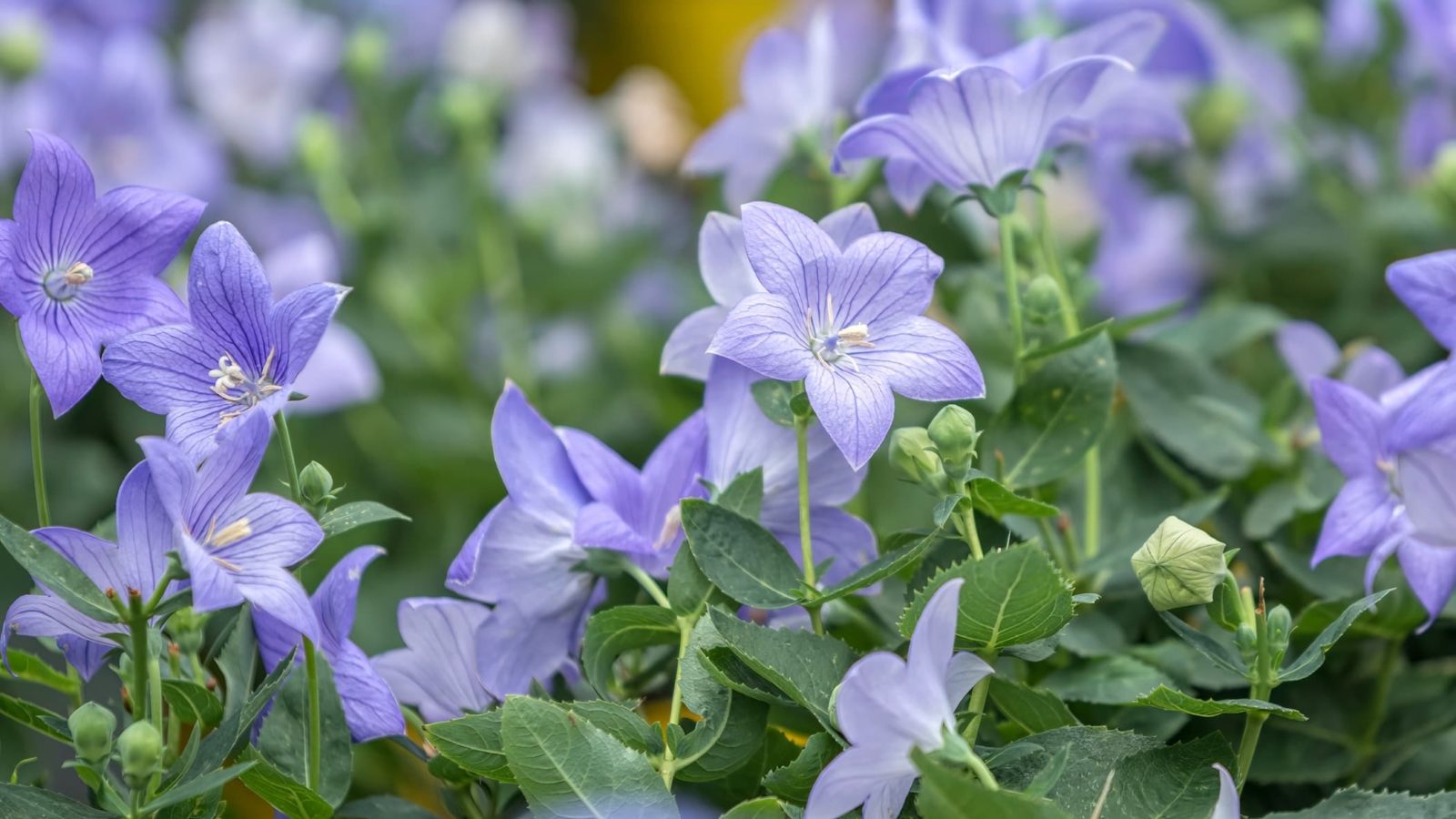 20 Perennial Herbs That Return Each Year

The Balloon Flower scores a hat-trick for your garden! This plant’s buds are amusing, to say the least, as they perfectly resemble puffed-up mini balloons. But the open flower is so very different with its elegant trumpet shape and the face-on five-point star display in rich, deep purple tones. And so, as bud or as flower, it will charm your visitors and trigger a conversation.

The Balloon Flower has a playful name and it even invites children to play with it, when it is in bud. Just before the bud blossoms into a flower it looks for all the world like a puffed-up balloon just crying out to be popped (not that we recommend it). Indeed, not infrequently a Balloon Flower bud will resemble a hot-air balloon in miniature. Opened up, this merry flower is elegantly trumpet-shaped and viewed face-on is essentially a five-point star. Adjacent petals are joined at about the halfway point.

The mother species produces flowers of a rich purple hue with a delicate filigree of veins on the petals. Varieties’ blooms are in numerous tones of purple and violet. Some varieties bear flowers in proper blue, pink, and white. A few varieties produce double flowers. The flowers are usually 5 to 7 centimetres across but a few varieties’ blooms can touch 9 centimetres. Some varieties show a single radial vein on each petal, others display a prominent network of fine veining.

The thickish leaves are serrated, lanceolate, and sessile – unstalked. Their deep, rich green shade is a fine match for the rich hues of the flowers. Some varieties’ foliage is markedly bluish green. In most cases the foliage turns purple or purple-and-yellow during autumn. As Platycodon grows in dense clumps and most cultivars attain heights between 55 and 95 centimetres, when their foliage and flowers are taken into account, these plants are verily made to order for borders front and rear, edging, and mixed beds. And then there are the dwarf variants!

Though the Balloon Flower has made some serious inroads in gardens in the northern and eastern United States, it is far from common in the British Isles. This reliable perennial will not only bring brilliant splashes of colour to your garden in that transition period from the dog days of summer into autumn, it will make for an interesting topic of conversation because of its relative ‘newness’ and also for the enormous and varied cultural significance Platycodon has in Japan and the Koreas.

Here is a very odd fact. As mentioned, the Balloon Flower, i.e. Platycodon grandiflorus, is the one and only member of Genus Platycodon. Yet the Botanical family to which this genus belongs, Family Campanulaceae, contains 89 genera which include about 2400 species!

Platycodon diverged from its sister tribes and clades between 37.4 and 23.5 million years B.C. but all we have for the millions of years of divergence is a single species in the genus. However, Molecular Phylogenetics suggests that the matter of Family Campanulaceae is not exactly a well-settled affair so we may see some or another change in the near future!

The locus of divergence is reckoned to be ‘Asia’ – rather a large landmass; however, the rational inference is that the locus was East Asia, the site of Platycodon’s long-known ubiquity and cultural value. Abundant in eastern China and other East Asian regions, this plant is also known as the Chinese Bellflower.

Platycodon has been cultivated in Europe to a relatively limited extent. The majority of Platycodon floriculture has taken place in Japan, Korea, and China. It arrived in Europe through Austria. A diverse selection of cultivars are presented underneath.

P. grandiflorus, the sole species, grows from 60 centimetres up to a full metre with a spread of only 30 to 40 centimetres. It has bluish-green foliage. The flowers are a rich purple with obvious veining, and are 5 to 6 centimetres across. R.H.S. Award of Garden Merit.

‘Astra Double Blue’ bears double flowers of a lavender hue that are about 7 centimetres in width. The petals have a pleasing alternating or staggered arrangement such that the inner petals do not overlap the outer ones. The plant grows to only about 25 centimetres.

‘Fuji Blue’, even by Platycodon’s robust standards, is especially resistant to pests and diseases. Its bluish-purple flowers are about 6 centimetres across. The translucent petals display pronounced delicate venation. This compact cultivar has a height and spread of 40 to 50 centimetres.

‘Mariesii’ is a cultivar that has caught on in the United Kingdom yet is virtually unknown in the United States. It is compact at 40 to 50 centimetres in height and has a similar spread. The 5-centimetre flowers are light purple with a bluish flush. R.H.S. Award of Garden Merit.

‘Apoyama’ is yet another cultivar that has caught on in the United Kingdom. The flowers are about 5 centimetres wide and are a light lavender shade. The petals display a filigree of veins. This is a dwarf cultivar that grows to only 20 to 25 centimetres. R.H.S. Award of Garden Merit.

‘Misato Purple’ is not particularly floriferous but it bears true violet flowers that are large at nearly 9 centimetres across. They exhibit dark, delicate venation. This is a compact variety that attains a height and spread of about 50 centimetres.

‘Astra Pink’ stands out among its purple-hued siblings due to its pale pink tone. This is a relatively floriferous variety and the blooms are also good-sized at about 7 centimetres. It is a dwarf cultivar that grows to about 20 centimetres with a similar spread.

‘Perlmutterschale’ (Mother of Pearl) also bears 7-centimetre flowers which are also pink but of a more upbeat candy pink shade. They are rose-red at the centre.  This is a tall variety that attains heights from 75 to 85 centimetres.

‘Fairy Snow’ is another cultivar that stands out because this one is white. It displays delicate bluish radial veining. The flowers are only about 4 centimetres across. It too is a dwarf variety that grows to about 20 centimetres with a similar spread. It has a relatively long blooming season.

‘Hakone White’ may be said to stand out twice as much because it bears pure white double flowers. What’s more, the flower is large at 7 to 8 centimetres. This tall cultivar grows from 75 centimetres to a full metre. Unlike other cultivars, it is not cold-hardy.

‘Komachi’ or the real ‘Balloon Flower’ – this amusing cultivar only bears purplish ‘balloons.’ Call them buds or call them flowers, they never open and stay in that puffed-up state. This cultivar grows from 80 centimetres to a full metre.

Other notable cultivars include ‘Hakone Blue,’ ‘Baby Blue,’ ‘Zwerg,’ and’Shell Pink’ (not to be confused with ‘Perlmutterschale’).

The Chinese Bellflower grows freely in the fields, meadows, and steppes of north-eastern Russia, eastern China, Japan, and the Koreas.

In Japan and the Koreas these plants are a common sight in cottage gardens and farmyards.

They tend to grow in sunny locations or part-shade locations. They are not found in heavy or wet soils but they grow in soil pH ranging from Moderately Acidic to Slightly Alkaline.

Native to a relatively small swath of land, this robust plant adapts to all temperate and sub-tropical regions. A large majority of varieties are hardy to Zone H5.

Where to Plant Balloon Flower

As mentioned, Platycodon is tailor-made for borders, edges, and mixed shrubberies. However, its proclivity of growing in thick clumps makes it a great choice for attractive groundcover. This deciduous plant tends to rise in mid-to-late spring; on the other hand, in the autumn it provides colour through both its flowers and its foliage.

It is this latter feature that makes dwarf varieties such as ‘Baby Blue’ and ‘Zwerg’ ideal for rockeries. ’Shell Pink,’ a mid-height variety with pink flowers is a top choice for a front border; the tall ‘Hakone’ cultivars in blue and white are equally fine choices for a rear border. However, each of these varieties may need staking, otherwise pinch the growing tip or cut it early on so that it is less lanky and more bushy.

Many Balloon Flower varieties are excellent choices for potted plants and mixed containers for the patio and the porch.

In the United Kingdom these plants should be grown in full sun but part shade will do perfectly well.

Platycodon should be grown in a rich loam with little to no clay but with some organic humus or compost. Soil should drain very well. They grow best in soil with pH between 5.6 and 7.3.

Though you can start Chinese Bellflowers indoors in small pots about six weeks before the last projected frost, in most regions of the United Kingdom it is a better idea to grow them outdoors from the off. Anytime in spring, after there is no chance of a frost, drop seeds on the soil but do not cover them because they need light to germinate. If you are concerned about birds picking up the seed then cover the seeds with a bare sprinkling of soil or protect them with garden mesh. Water the seeds well.

As the seeds sprout and grow, water them moderately such that the soil usually stays moist but is not overly wet. Balloon Flower’s water requirements are moderate.

Flowers should be deadheaded.

After the plant has died down, cut off the withered foliage but do not cut the stem down to the ground. Before winter sets in, apply a good layer of organic mulch. Reduce the frequency and amount of water.

Remove the mulch in spring after there is no chance of frost.

This plant tends to rise later in spring than other deciduous perennials. Take care not to disturb Platycodon’s fleshy roots in any way as they are quite delicate.

An application of a balanced slow-release fertilizer once in late spring would be beneficial.

You will invariably see the taller cultivars getting floppy, especially in late summer to early autumn. It’s not that the plant has gone leggy; it is simply a trait of the taller varieties. You can pinch the leader or growing tip to encourage bushy growth early on, otherwise stake the plant.

Only the taller cultivars need pruning, especially those whose heights are significantly greater than their spreads, such as ‘Blaue Glocke’ and ‘Fuji Blue.’ Either keep pruning such varieties judiciously to attain a compact form or pinch the leader or growing tip.

Platycodon are remarkably pest-resistant and disease-free.

Snails and slugs like this non-toxic plant so be vigilant for these pesky critters which are less of a danger and more of a nuisance.

Where to Get Balloon Flower

You may have to visit a few nurseries and garden centres to find one that sells potted plants. Platycodon seeds are available fairly widely, though not in a rich selection. Where the Balloon Flower is concerned, in the U.K. you will have to make do with limited varieties.

However, if you have one Platycodon, you can get more. First, these plants are fairly reliable self-seeders though not aggressively so.

You could also let the flowers dry out on the plant and then collect and store seeds though be mindful that cultivars usually will not grow true.

These plants can be grown quite reliably from stem cuttings. In late spring or early summer cut off about 10 centimetres of the stem. Trim the leaves from the bottom half of the cutting. Dip the base of the stem in water, and apply some rooting hormone or dip it in honey and then in cinnamon. Plant the cutting in damp soil of the type described above, amended with potting soil near the surface.

Water moderately so as to keep the soil moist.