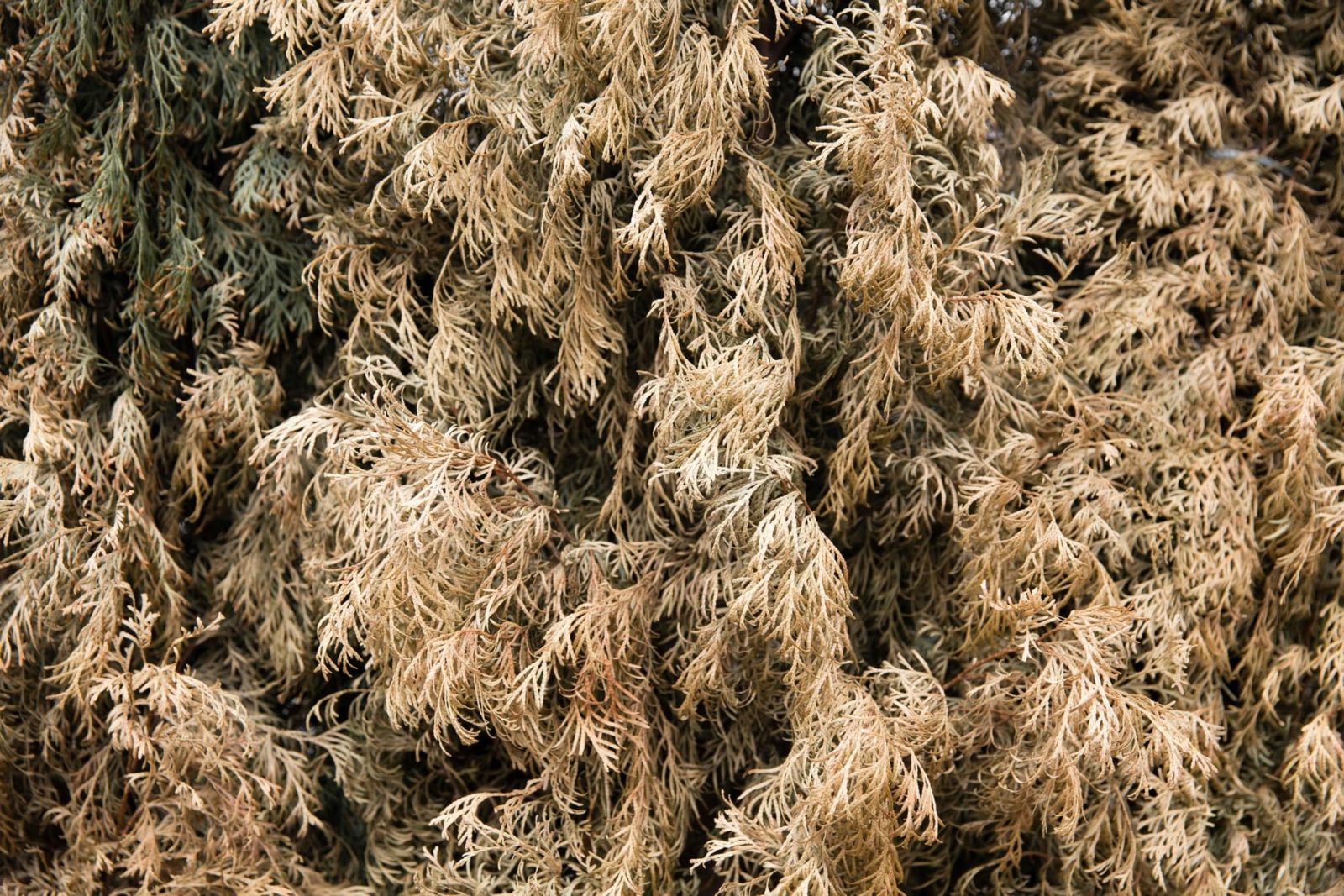 Years ago, when I got my first full-time office job, I thought I’d liven up my desk a little bit with a potted conifer.

An occasional glance at the plant reminded me that nature was still waiting for me outside the walls and beyond five o’clock.

But then everything started to go wrong…

Bright evergreen began to fade into a sickly brown.

At first only a few needles changed colour, but others followed suit until eventually, the healthy hue disappeared completely.

Needles fell from branches, coating the soil in a thin layer of death. The uplifting reminder of the outside world became a twisted metaphor for life seeping away.

Melodrama aside though, it’s easy to see where I went wrong.

While containers and offices aren’t the best environments for conifers, they can be made to work in both.

And it’s usually one of the same handful of problems that interfere with their ability to do so.

Why your conifer is turning brown

When you think about it, plants need very little to thrive. It’s just a case of getting the right soil, the right levels of water and sunlight, enough space for the roots, and a careful eye to ensure that any issues are nipped in the bud.

Common problems with conifers centre around these things, so let’s take a look at the various issues you may encounter.

These trees are used to growing in environments where the weather may not be particularly pleasant. They can handle melting snowdrifts and all sorts of wetness.

Sitting in the small amount of dry soil that fits in a container then, probably isn’t ideal.

If you’re growing a conifer take care to keep it very well watered. More so than you probably expect: sometimes they require watering twice in the same day during particularly hot spells.

And if you see water seeping out from the bottom of the pot, this can be a good indication that the roots are taking up too much space in the soil or that you’re using the wrong compost.

In the first instance, there’s just not enough soil available to soak up the moisture required to keep the plant alive. And in the second instance, the soil is unable to hold enough moisture regardless of whether there’s enough of it.

A soil-based mix with added material like composted leaf bark or leaf mould will help to hold more moisture, and to let air circulate around the roots.

Ask in your local garden centre if you need advice on the specific compost mix for the conifer(s) you’re looking to grow.

Different types have different requirements, and it’s important to get this right.

The reality is that conifers will do best when they’re grown in the ground.

These are proud and hardy trees that can hold their own against the elements, and a life spent in a small pot isn’t really ideal.

If you buy a potted conifer, consider planting it out into the ground after a year or so. This, combined with vigilant watering, should give it the best shot at thriving.

If you’re wondering why this becomes problematic, think about the roots of the conifer.

As the tree grows so too do its roots, and in a small pot they’re quickly going to run out of space.

As the ratio of roots to soil changes, it gets exponentially harder for the conifer to get the nutrients it requires.

Needles turning brown and dropping off is a desperate attempt by your plant to shepherd its resources but, unless you take action, this is unlikely to be enough to save it.

If you do decide to move your conifer outside, try to find a sheltered spot that gets full sun or partial shade.

Wherever you grow your plant, make sure there’s suitable drainage to allow any water that’s not absorbed to seep out.

In a pot this means drainage holes, and maybe even a layer of gravel between the bottom of the container and the soil. In the ground, this means suitable irrigation.

You’ve probably noticed that we advise watering often and using a compost that can retain moisture, while also advising you to ensure there’s plenty of drainage for excess water.

This is because with conifers, it’s notoriously tricky to get the right amount of water. While they’re hardy, they’re also fussy, and once things start to go south it can be hard to get them back on track.

Nutrition is crucial in keeping plants alive and well. We advise feeding your conifers in late winter, then mulching the top of the soil.

This will top up their nutrients and hopefully encourage stronger growth.

Applying feed once a year will be enough to keep these trees suitably nourished: resist the temptation to over-feed as this can disrupt their delicate balance.

Many gardeners get a little over-enthusiastic when pruning their conifers, out of a desire to keep them looking neat and trimmed.

Unfortunately however, pruning too aggressively can shock the plant and cause damage. And because this plant doesn’t regrow from old wood, it can take a permanent toll.

When it’s time to prune, be gentle. Only take off a small amount, and do this only in April through August.

It’s far preferable to take off too little then rectify later on with another gentle prune, rather than to hack off so much that you cause irreversible damage to the plant!

Grown with the care and attention they require, conifers are beautiful and rewarding plants to have in your garden.

They’re big, bold, and vibrant, holding their colour year-round and providing a reminder in the lean months that Mother Nature will hold court again shortly.

While it can feel like a bit of a balancing act getting the conditions right for your fledgling conifer, once you get a feel for it and your plant begins to get established, you should find things easier.

Just remember that they’re thirstier than you might expect, that good moisture retention and good drainage are both required, and the over-zealous pruning will cause way more harm than good.

And whether you decide to keep a conifer in a small container on your desk, a large container on your patio, or buried in your lawn, the steps in this guide should hopefully help you to keep it alive and well for a long time to come.