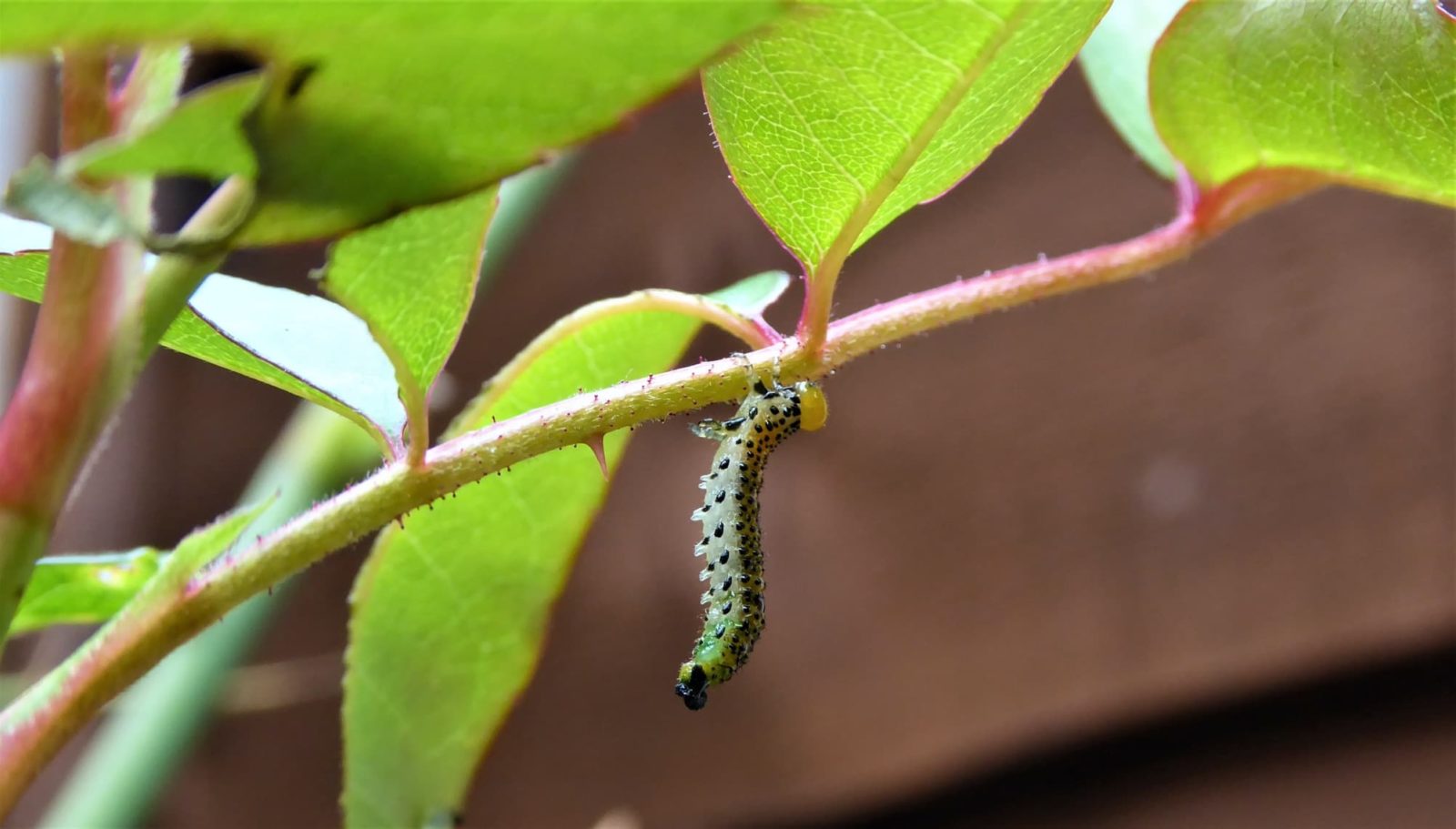 How To Grow Magnolia Trees In Pots

If you see caterpillars on your roses, and some damage to your plants, sawfly species could be the culprits.

Read on to learn more about the sawfly larvae you may encounter on roses in the UK, and how to deal with them if you find some in your garden.

Sawflies are insects in the Hymenoptera genus (the same group as bees, wasps and ants). [source]

The adults are winged insects that look like flies, and they have caterpillar-like larvae which feed on the leaves of plants – including wild and cultivated roses. [source]

There are several different types of sawfly that you may see the caterpillars or larval forms of on your roses. [source]

One of the sawfly types which can attack roses in the UK is the large rose sawfly.

There are actually two species of large rose sawfly in the UK – Arge pagana and Arge ochropus. [source]

The former species is more common – the caterpillar-like larvae of these species can cause extensive leaf loss in early and late summer.

You may see female sawflies dangling from stems by their egg-laying organs.

You may also see elongated scars on the stems of a rose that form where these sawflies lay their eggs.

The larvae hatch in groups between May and October, and feed together.

They are pale green with black spots and yellow patches and can be up to around 2.5cm long.

Many leaves where they eat will be entirely gone.

This species inserts eggs into leaflets on rose bushes in spring and when doing so, secretes chemicals that cause the leaves to tightly roll-up. [source]

The damage done by these sawfly on rose bushes is distinguished by the tightly curled leaves.

As mentioned above, this is caused by chemicals excreted when the females lay their eggs.

The leaf rolling will usually occur between late April and early June.

The larvae feed inside the rolled leaves, which can remain on the plant throughout the summer months.

The larvae will go down into the soil in late June/July to overwinter and pupate in the spring.

Another species of sawfly that can cause issues for roses in your garden is the slug sawfly, or slugworm: Endelomyia aethiops.

The larvae of this species nibble away the surface of leaves until all that is left of each leaf is the epidermis.

This species does not cause defoliation.

Rather, you will see ‘window-paning’ where the leaves have been eaten down to the epidermis and damaged areas turn white or pale brown.

The bodies are see-through and you can often see gut contents as a dark green line down the body.

There are two or sometimes three generations each year, between June and October, though the worst damage is usually apparent in July and August.

If you’re experiencing issues with your rose plants that don’t match the symptoms above, you should also check for rose black spot.

Though sawfly can damage the foliage on your rose bushes, it is important to note that if your roses are otherwise healthy and in good condition, they should be able to stand some damage or defoliation.

Sawfly will therefore rarely kill your roses unless they appear in dramatic numbers.

Keep your roses as healthy as possible, with healthy soil, companion planting, good watering where needed, and a pruning regime appropriate to the type of rose you are growing.

Some good companion plants for roses include Foxgloves, Erysimum, Alliums, Salvias, Nepetas, Hyssop, Lavender… to name but a few.

It is always best for pest control and biodiversity to grow roses among and alongside other plants in mixed polycultures, rather than on their own in dedicated beds.

If you only have a light infestation, even of the large rose sawflies which cause the most extensive damage, you can simply tolerate them.

Often, in an organic garden, it is best to take a live and let live approach.

While sawflies can be horticultural pests, it is important to remember that like all native wildlife, they play an important role in the ecosystem.

The adult sawflies are pollinators, feeding on pollen and nectar amongst other things.

And sawflies and their larvae also play an important role in the food chain and are eaten by a wide range of useful garden species.

So as with most garden pests, it is not a good idea to try to eradicate them entirely.

It is also important to note that if you try to eradicate a species entirely, this weakens the ecosystem, and their numbers can rebound dramatically, without being checked by other species in the ecosystem.

An an organic gardener, it is always important to embrace natural predation.

By encouraging creatures that eat sawfly and their larvae to your garden, you can help keep their numbers down and keep your roses safe from damage.

Wrens and other garden birds, and ground beetles, are useful predators for sawfly to welcome to your garden.

Ladybird larvae will also sometimes predate sawfly larvae and so are another beneficial creature to have around. [source]

Make sure you have biodiverse planting, and other features, to keep them happy in your garden.

It is important to remain vigilant and to check over your rose bushes regularly for any sign of infestation.

The sooner you spot a problem, the easier it will be to deal with.

In a garden, a vigilant gardener will often be able to spot a sawfly infestation early.

Where the infestation looks as though it may become a problem, it is often possible to squash eggs or remove a small number of larvae by hand.

Either dispose of the larvae, give them to chickens if you keep them in your garden, or leave out the despatched larvae on a feeder for garden birds.

In cases of extreme infestation, it may not be possible to pick off the larvae by hand.

In such cases, you might consider an organic pesticide – contact insecticides containing natural pyrethrins can work, though you will usually have to repeatedly apply for good control.

Remember, however, that even organic pesticides should only ever be considered as a last resort.

Note: you should never spray roses while they are in flower, since this endangers bees and other pollinating insects. [source]

It is always best to look to natural pest control methods – holistic or integrated pest management – to keep your garden ecosystem in balance.