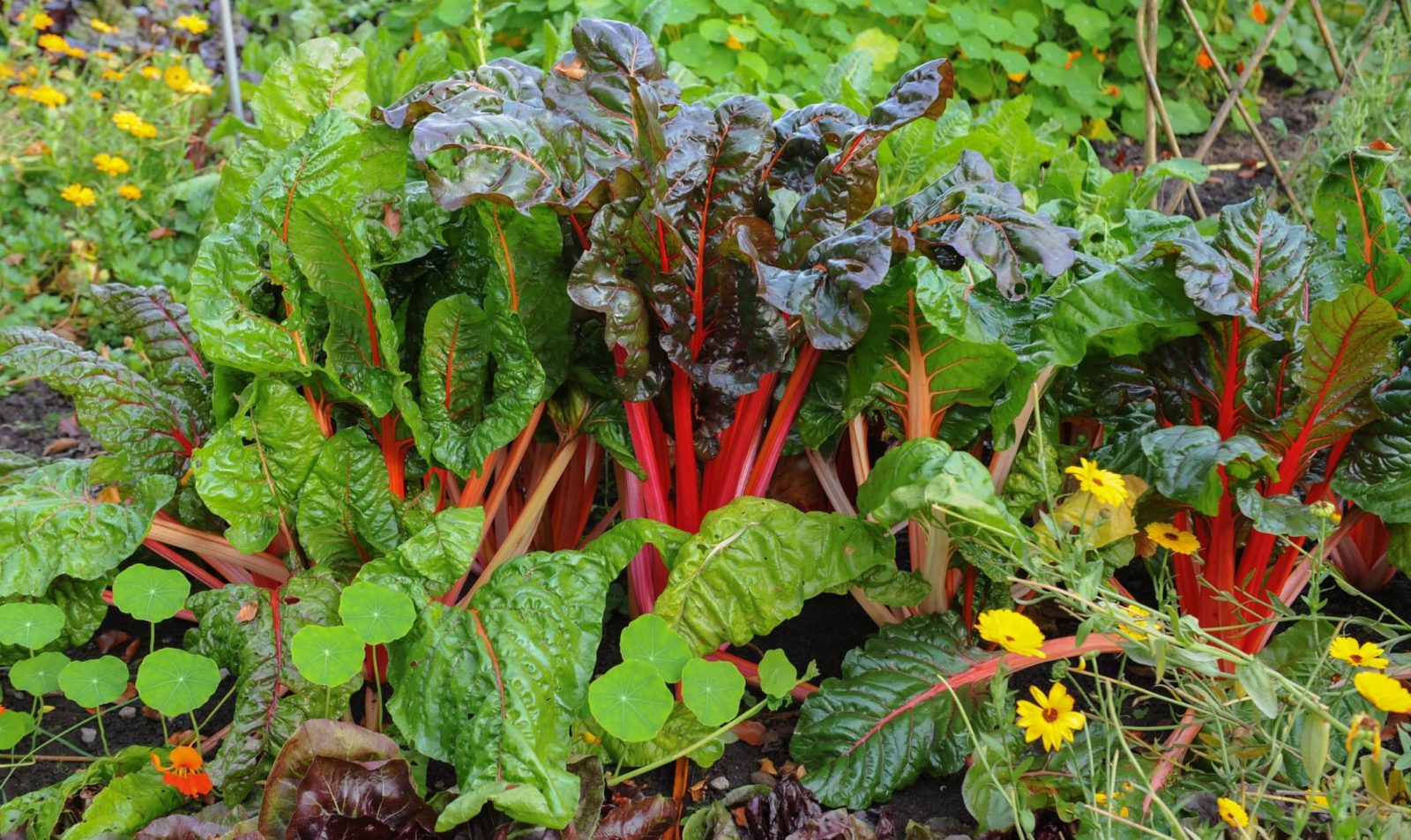 Both the brilliant green leaves and the bright red stalks of Swiss Chard have their own rich flavours which vary from cultivar to cultivar.

This useful veg is easy to grow and is prolific enough to provide a continuous supply of tasty greens for months on end.

Ruffled, puckered leaves in a brilliant or rich shade of green bisected by a colourful petiole that is quite often a bright, popping red will decorate your garden if you grow Swiss Chard.

If you haven’t heard of Swiss Chard, perhaps you know it by another name.

This leafy green – rather like a private eye – goes around by many an alias.

Some of the more well-known ones are Silver Beet, Leaf Beet, Seakale Beet, Beet Spinach, Perpetual Spinach, and Ruby Chard.

As for Chard’s ‘given name’ – it’s quite a mouthful.

You see, this vegetable is a sub-species of beetroot, the root vegetable.

One could describe Chard as bridging spinach and kale.

Its several cultivars have sufficiently varying flavours to please spinach-lovers and kale-lovers…and quite possibly also those who do not like either spinach or kale!

Not very many Chard cultivars are commonly grown or available but from those that are we have selected half-a-dozen of the best.

All but the first are recipients of the RHS’s Award of Garden Merit.

Chard cultivars vary in colour, taste, and other characteristics as well.

‘Perpetual Spinach’ is identified by its very name as a cultivar that you can be assured of harvesting on a continuing basis. It is more spinach-like than most Chards and makes a fine spinach substitute. This variety keeps particularly well, and can be refrigerated longer than most others, and is the best one to store frozen.

‘Rhubarb Chard’ or ‘Ruby Chard’ is the cultivar that gives Swiss Chard its reputation for ornamental value. Though the leaves are tasty enough, this variety is probably one for decorative value: the scallopy, wavy leaves are a brilliant, deep shade of green while the petioles, midribs and even the veins are an equally vivid ruby red.

‘Fantasy’ splits the difference between taste and ornamentation. It has ruffled bright green leaves and also bright red petioles and veining. It is very flavourful but with a pleasingly mild taste without any ‘bite’. It is perhaps the best variety for eating raw in salads.

‘Canary Yellow’ is also ornamental and tasty but in a different way. The leaves are of a rich, bright green colour while the petioles and midribs are bright yellow. It has a heavier, more ‘substantial’ taste with a touch of pepper or bitter, making it an excellent cooking variety.

‘Lucullus’ is an heirloom variety that is well known to be prolific. Its strengths are heavily skewed towards taste rather than ornamentation. The yellowish-green leaves are as tasty as any green vegetable. The petioles are ‘merely’ white but they too are tasty and juicy, and make a very good asparagus substitute. It does not tolerate overly-wet soil.

‘Fordhook Giant’ is also an heirloom variety that is renowned for its vigorous growth. It is also particularly hardy and the most frost-resistant, allowing the gardener to harvest leaves through winter so long as the ground is not frozen over. Its leaves are almost the colour of kale while its stems and petioles are creamy white. It is strongly flavoured and is great for cooked dishes.

When & Where To Plant

As average frost dates vary very widely in the United Kingdom it is not possible to specify a single timeframe for the whole country for planting Chard.

The Chard-growing season will be more constrained in northern regions and in colder zones because you must plant seeds later in the season and you must make your final harvest before the first frost of the season.

For the most part, in England and Wales Chard seeds can be sown from the beginning of April through early September though it is not advisable to plant this vegetable during May and June.

Though you can plant seeds about ten days before the last expected frost date, we suggest that you wait out the last frost of the season and then sow seeds.

You can sow Chard seeds up to about ten weeks before the season’s first expected frost.

As a general rule, plant Chard at the top of spring and the end of summer with April and mid-July-to-mid-August being the best time periods.

By all means, allow your spring-planted Chard plants to grow through summer but it is not a good idea to plant Swiss Chard for growing during the summer months.

Though one can harvest on a continuing basis from Swiss Chard plants, one can practise succession sowing with this vegetable.

For the specifics of Chard plant care, please see the following sections.

Chard likes nutrient-rich, fertile soil that has been well cultivated.

Any type of loam will do so long as you till it well and deeply, and work in ample organic compost or well-rotted manure.

The soil should drain very well.

The ideal soil pH is Slightly Acidic, that is with a pH of 6.1 to 6.5. Of course, there is some leeway and anything from Moderately Acidic to Neutral will work out.

As the seedlings grow, one necessary care task is to thin the young plants.

If you pull them up, be very careful not to disturb the shallow roots of the adjacent young plants!

The thinned Chard plants should not be composted or thrown away – they will make tasty additions to salads and stir-fries.

Swiss Chard should be sited in full sun. A few hours of shade is fine but the more sun the plant gets, the better the crop.

Any aspect will do but it should be grown in a sheltered location.

Water the plants regularly but in moderation.

Aim to water about twice a week such that the planting area is kept moist – it should not be soaked through and through.

When and how you feed the plants depends on when you sowed the seeds and on the quality of your soil.

As a general rule, feed the plants 20 to 25 weeks after sowing.

If your soil is nutrient-rich to begin with then simply work in a small quantity of organic compost or well-rotted manure into the soil around the plant.

If not, then feed the plants with a fertiliser.

Blood, Fish & Bone is a very good option if your soil is poor.

Check the planting area for weeds regularly as they will affect the growth and vitality of Chard plants.

Consider mulching around the plants to suppress weed growth.

Avoid using any chemical weed killers near Chard (or any other edibles).

In preparation for winter lay mulch to about 15 centimetres.

Do so right after you have made your final harvest of the season; do not wait until the frost.

An organic mulch of compost, leaves, and pine needles will serve the purpose very well.

If you live in the frigid zones of the north and you want to be sure of protecting your Chard plants, besides mulching them, consider building a low tunnel over them.

You can grow a single plant to a small pot though if you want to grow multiple plants in a larger container or in a planter, sow seeds at least 5 centimetres apart and thin later, or simply space the seeds in keeping with the spread of the mature plant in the first place.

Fill pots or containers with organic compost or a rich potting soil.

Pots or containers should have drainage holes.

Water the soil after sowing so that it becomes damp. Keep watering regularly but in moderation so that the soil stays moist to damp.

The soil should not become waterlogged. Guard against overwatering.

As with growing Chard in open ground, the pots should be placed in a sunny but sheltered location.

Chard is seldom troubled by any of the usual pests and diseases that affect vegetables.

The plants are quite often eaten by slugs.

They are nocturnal creatures so if you go out in the morning and see tears and holes in your Chard, suspect slugs.

If you are growing Chard during a hot summer, you need to be aware of a few caveats.

It will grow noticeably slower than it does in temperate weather, and the leaves will become bitter more quickly and will need to be harvested much earlier than normal.

Finally, be watchful as the plants may bolt, leaving you high and dry.

More mature leaves can be cooked like spinach or used in soups and stir-fries.

Moreover, one or two cultivars lend themselves to being enjoyed fresh in salads while one or two others are terrific for sauteing and even pot-cooking.

And, oh, don’t forget those colourful stalks and midribs – lightly cook them and you’ll find that some cultivars’ stalks taste like celery and those of others like asparagus.

Throw them together with the leaves in a casserole or use them separately to make soups and to flavour stews.

Yup, with Chard you get two veggies for the price of one!

Chard is one of those vegetables that is among the essentials of increasingly-popular Mediterranean Cuisine, and that makes sense because this leafy green is a native of Sicily.

You too can incorporate Chard into your diet – Mediterranean or otherwise – as a green vegetable that is both industrious and colourful.

It is not only easy to grow, you can keep snipping off a few leaves every so often, thereby continuing to harvest this tasty vegetable from one and the same plant for even two years.

Though it is cold hardy it should be grown in a sheltered location.

As an edible, it is not useful after a hard frost sets in as the leaves will not be enjoyable.

Why is my chard not growing?

If your Chard seeds have germinated but the plants are not growing, any of several reasons could be behind it. Here are a few:–

How long does it take to grow swiss chard?

Swiss Chard is ready to be harvested in about nine weeks.

Does chard grow back every year?

It does not ‘come back’ every year but it will come back once, perhaps twice.

What can you not plant next to Swiss chard?

You should not plant herbs, potatoes, turnips, melons, cantaloupes, gourds, or cucumbers next to Swiss Chard.