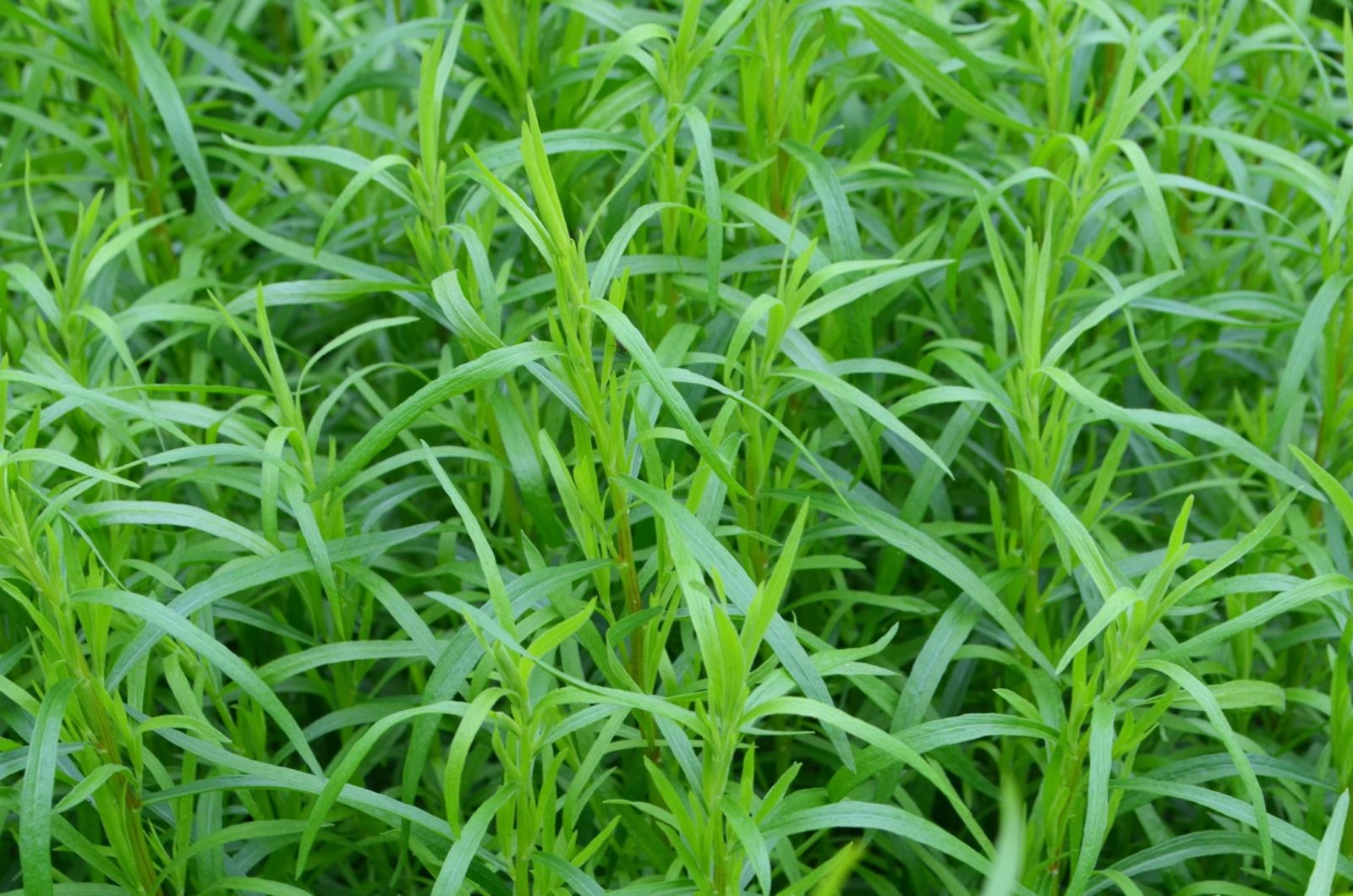 Tarragon is a useful culinary herb to grow in your garden or indoors.

Tarragon is not the easiest herb to grow here in the UK, but this simple guide should help you understand it better, and to make the right choices and care for it in the right way if you want to grow it at home.

There are two main types of culinary tarragon, informally known as French tarragon and Russian tarragon.

French Tarragon, Artemisia dracunculus var. Sativa, is a common culinary herb.  French tarragon is considered to be the superior herb for kitchen use.

It is one of the fines herbes of French cuisine. It works particularly well in chicken, fish and egg dishes but is used in many ways in cooking.

It spreads at the roots, thrives on neglect, and copes with poor soils and even drought.

While not great as a culinary herb, Russian tarragon does have a range of other uses and is sometimes grown where French tarragon will not thrive.

In the UK, French tarragon is usually the variety recommended for cultivation.

This is a short-lived perennial herb which, though it will usually only continue producing for a few years, can be propagated for a continued supply.

Growing tarragon, especially French Tarragon, is a great choice for those who love cooking with their own homegrown produce and herbs.

As well as being used as a pot herb, tarragon is also of value because it has a beneficial effect on digestion. It is frequently used with oily foods for this reason.

The aromatic leaves have a lovely liquorice or anise-like flavour and can be used fresh or dried for later use. They are a key ingredient in classic béarnaise sauce.

The herb also has a number of uses in herbal medicine.

Additionally, tarragon is notable for its ability to attract beneficial wildlife to the garden. It is also said to aid in repelling certain pest species as well as sheltering beneficial invertebrates.

It is most frequently grown in a dedicated herb garden alongside other Mediterranean herbs which enjoy the same or similar growing conditions like rosemary, lavender, marjoram, oregano, thyme etc.

However, it may also be beneficial to consider placing tarragon (either in the ground or in containers) around the crops you are growing in your kitchen garden for beneficial wildlife attraction and organic pest control.

Like other aromatic herbs, tarragon makes a great companion plant for a range of garden crops and other plants.

Anecdotally, it is also traditionally believed to enhance the growth and flavour of other crops grown close by. So you may also wish to consider growing tarragon in pots close to annual vegetable areas, or placing tarragon around the edges of annual beds.

Tarragon is said to be a particularly beneficial companion plant for aubergines and peppers. Though it could aid a range of other plants too.

French tarragon is a perennial herb that does not flower or set seed reliably. So it is not usually grown from seed.

When seed for tarragon is sold, this is usually for the inferior form of Russian tarragon. If you wish to grow French tarragon, you will usually purchase pot grown plants in spring.

These tarragon plants are usually potted up into larger pots filled with a free-draining growing medium. Or they are planted out into free-draining garden soil in a sunny, sheltered spot.

If you are growing tarragon in a pot, choose a container which allows for dry and free-draining conditions as the plants are said to taste better when not grown in moist conditions, in relatively poor soil.

A terracotta pot is ideal for growing herbs which prefer drier and more free-draining conditions.

Fill your container with a peat-free multi-purpose compost with plenty of horticultural grit incorporated. And make sure you place a crock and the base, and use a pot stand, to make sure that water can always drain away freely.

Plant the tarragon to the same depth in this container that it was at in its previous container.

If you are planting tarragon out in your garden, be sure to choose a site where water drains freely, and where the tarragon will get as much warmth and sun as possible.

Make sure that you avoid frost pockets, and any areas which become waterlogged. Tarragon roots will rot in wet or heavy soils.

Plant out in spring as soon as the weather has warmed reliably and frosts are well passed.

French tarragon is not as easy as some other perennial herbs to grow.

While it can be very tolerant of poor soils and free drainage, it can be fussy about other conditions and it is important to care for your plants correctly if you want to see the best results.

Though tarragon likes free-draining conditions, it is important not to let the growing medium dry out entirely, especially when you are growing tarragon in pots.

Young plants, and plants grown in containers, will require more frequent watering than mature specimens and those growing in the ground.

Make sure that you water regularly throughout the growing season. But do not overwater.

Try also to ensure that plants do not stand in water during heavy rains, or suffer excessive watering, as this can cause the roots to rot.

You can pick the leaves of tarragon any time throughout the growing season.

The leaves will continue to come as long as the plant does not flower. It is good practice to cut back/ harvest around half of your plants in around June for a continuous harvest.

If you see flower buds emerging, you should nip these out so that the plants continue to produce their leaves.

Tarragon can be very popular with slugs, especially early in the season and when plants are young and small.

Remain vigilant as you may lose entire plants to these pests if you do not catch them early.

Pick slugs by hand to remove them, use physical barriers, and remember that the best way to control slugs in an organic garden is to entice plenty of their predators to your garden to keep their numbers down.

Tarragon can also be susceptible to fungal infections like powdery mildew and rust. Avoid overcrowding, ensure adequate drainage, make sure you are watering correctly, and grow in cooler conditions to reduce the chances of these problems taking hold.

Remove and carefully dispose of any affected plant material as quickly as possible.

French tarragon is borderline hardy, so will need to be in a sheltered position over the winter months, or moved under cover in colder areas.

In colder areas, you can also consider protecting the plant with a cloche or horticultural fleece.

The above-ground growth will die back each autumn, but new growth should emerge in the spring as long as the roots remained healthy over the winter months.

Waterlogging rather than temperatures is usually the main issue, so it is often a good idea to move the tarragon to an unheated greenhouse or cool porch, for example, over the coldest and wettest part of the year.

Placing pots in the rain shadow of a wall or fence may also help.

French tarragon, as mentioned above, cannot usually be reliably propagated by seed. But once you have a tarragon plant, you can still increase your plant stock and ensure an ongoing supply of this useful herb by taking root divisions of mature plants.

Remember, though tarragon is a perennial plant, it will run out of steam after a few years. Taking divisions is a good way to make sure you have new plants to replace the older one.

In autumn, take a mature, large tarragon plant in a pot. Remove the plant from its pot and saw the root ball in half.

Repot one half, using fresh, peat-free multipurpose compost and grit, then divide the remaining half into a number of root cuttings.

Cut off the top growth from your root cuttings, and prune off thin straggly roots so that each cutting can fit into a module or small pot.

Take care not to do any damage to the main creeping rhizome which stores the energy for next year’s crop. Then pot up these root cuttings and water lightly.

Label them, then place them in an unheated greenhouse, polytunnel or cold frame over winter before planting out the following spring.

Tarragon is not always the easiest herb to grow in the UK. But it is worth it for those gourmands who want to grow all the ingredients they need for their culinary creations in their own garden – and for those who want to benefit from the ecological benefits of this plant in their organic growing efforts.