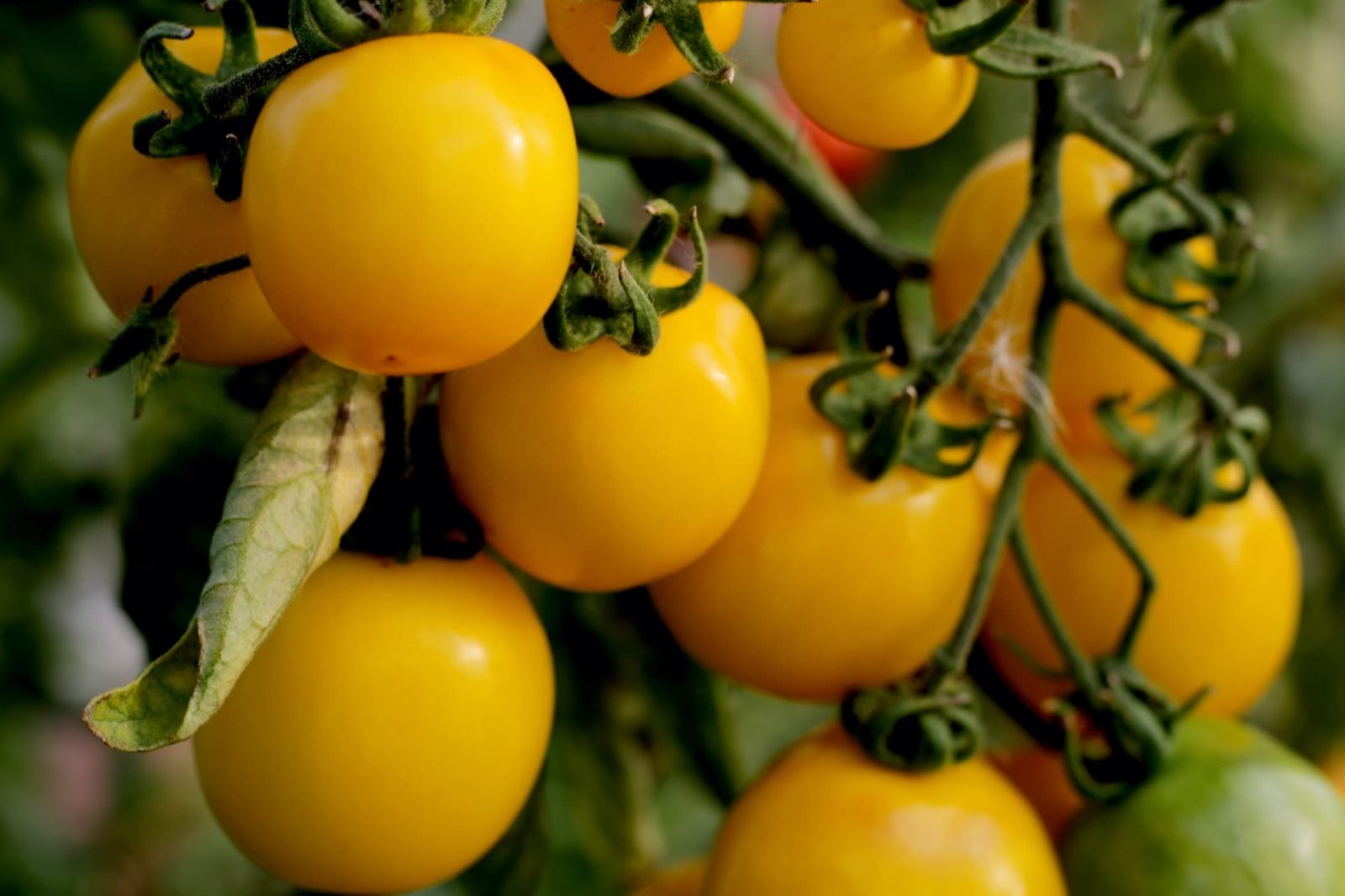 There are plenty of interesting tomato varieties out there to choose from and with all these great yellow and orange varieties, you don’t just have to stick to typical red toms – you can grow a rainbow in your garden.

Though there are far too many yellow and orange tomato varieties to include them all in just one article, below you will find a selection of seventeen interesting options to consider.

Orange and yellow tomatoes often have a great flavour, but will also enrich your garden with their glowing, summery hues.

These bright yellow and orange types will look great on the plant, and also add colour and taste to summer salads and other recipes.

This is a high-yielding yellow cherry tomato that can also be a good choice for UK growers.

A heritage variety, Galina is an indeterminate type, well suited to growing further north, It comes from Siberia and so is a great choice for those with a cold climate and a short growing season.

One of the great things about these is that they start producing early, and also continue to crop until late in the year.

Since this is a heritage variety, you can save your own seeds to plant the following year.

Tender skinned and tangy, Gold nuggets could also be a good choice.

These slightly oval-shaped cherry tomatoes are a brilliant yellow hue.

This is a determinate variety with a compact and bushy growth habit. It crops reliably especially undercover here in the UK, and has been awarded an RHS Award of Garden Merit.

This heirloom was bred in Oregon in the US specifically for colder climates.

This is a cultivar from Japan which is highly rated for its outstanding flavour, resistance to splitting, and performance.

This is another F1 variety, which is best cordoned and which can outcompete even the famous Sungold (see below) on flavour.

They do very well under glass but can also grow well outdoors.

People prize this variety too for its excellent flavour, thin skins and reliably good cropping.

Choosing this tomato cultivar is another way to bring a splash of sunshine to your garden.

This is another golden tomato variety to consider growing in your garden.

This golden coloured cherry tomato variety is another great option to consider.

These fruits have a higher Brix rating (sugar content) than the famous Sungold.

They are extremely sweet when fully ripe, and are said to have a honey-like aftertaste.

They yield best in a greenhouse or polytunnel, cordoned, and are very reliable (though perhaps not as high yielding as Sungold and other varieties).

As an F1 hybrid, they also have a small amount of blight resistance.

A small elongated, pear-shaped cherry tomato, Ildi is a great choice to consider growing in hanging baskets or containers.

The fruits are sweet and are fantastic for eating raw and for using in salads.

They can be perfect for growing on a sunny patio, even if you do not have a very big garden.

Many UK gardeners have had great success with this cultivar.

The fruits are large for a cherry type – around 3.5-4cm across.

They have a balanced flavour and are produced prolifically over a relatively long growing season – starting to produce early and continuing on well into the autumn in the right conditions.

The Lemon grape tomato (Cytrynek Groniasty) is a Polish variety that produces lovely mini-plum tomatoes in abundance on cordons.

The fruits last well without splitting, and they have a great flavour too.

This could be another more unusual tomato cultivar to consider growing in your greenhouse, polytunnel, or elsewhere in your garden.

Another F1 variety of tomato, Orange Paruche has, as the name implies, deep orange tomatoes.

These are very flavoursome and fruits appear very early in the year, which is great for those with a short growing season.

Some say that these are now one of the tastiest orange cherry tomatoes around.

If you are short on space and are looking for a trailing, compact, bushy tomato variety for hanging baskets or containers, then Pear Drop could be a good option to consider.

The yellow-orange fruits produced on this cultivar are tasty and produced in abundance.

With an RHS AGM, Sun Baby is a top cherry tomato variety.

Though it is not the heaviest of croppers, the yellow fruits have excellent flavour and thin skins.

They can be grown indoors in a greenhouse or polytunnel, but can also crop pretty well outside here in the UK.

Sungold has long been by far one of the most popular tomato varieties grown in the UK.

This orange cherry has been extremely popular since being introduced to UK gardeners in the early 1990s.

Its high Brix (sweetness rating) and great flavour have no doubt been the main reason for its popularity.

As you can see above, there are plenty of other options said to rival this variety.

But as a tried and tested favourite with an RHS AGM, this is certainly one option to consider.

Tumbling tom tomatoes come in both yellow and red versions.

Tumbling toms are known to be one of the best tomatoes for a hanging basket or another hanging container.

These plants produce cherry tomatoes which cascade down around the edges of your basket or container.

They are sweet and delicious – the yellow version is somewhat slower growing than the red one, but brings a welcome sunny glow to your garden.

These are just some of the many yellow and orange tomato varieties that it is definitely worthwhile considering growing in your garden.

And once you have explored these options, you might also like to consider fruits with other colours and interesting patinations.

When choosing a tomato variety, remember that there is more to consider than just colour.

But by exploring tomato varieties of different hues, you can learn more about all the interesting hybrid and heritage options available, and branch out to try new varieties to grow at home.

Just be sure to choose varieties suitable for growing in the climate, microclimate and other conditions in your particular garden.