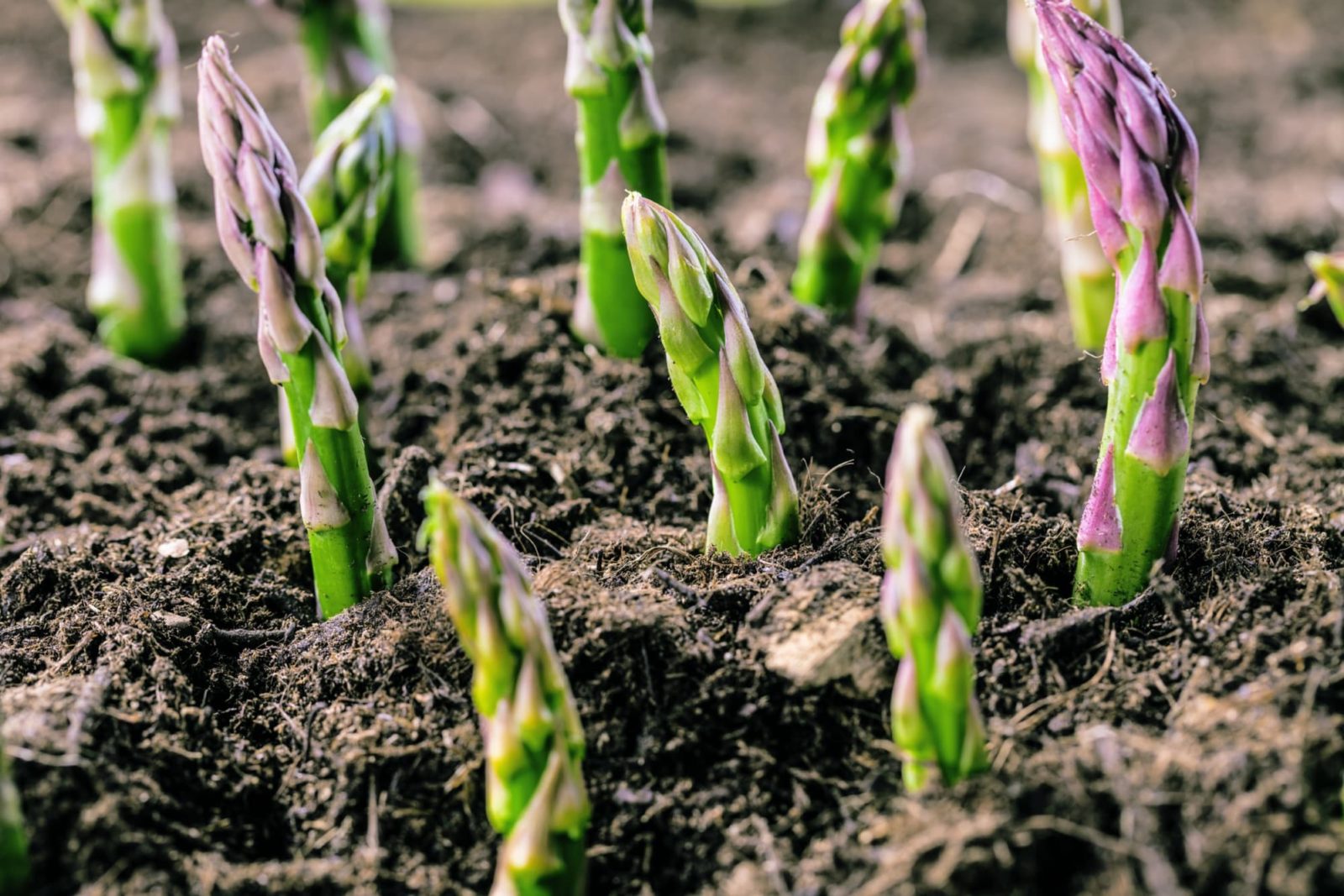 Preferred
Most (except heavy clay)

pH
Any (except highly acidic)

Asparagus is a perennial vegetable that can provide you with a useful, edible spring yield over a number of years.

While most gardeners who grow their own will focus on annual and biennial crops, choosing some perennial edibles can also be an excellent idea. They are a great choice for low maintenance gardens, and once established, typically require less care than most typical annual or biennial fruits and vegetables.

Asparagus is a delicacy, prized for its delicate flavour. And though it will not be an ideal choice for all conditions. It can find a place in many UK gardens.

Asparagus, also known as garden asparagus or Asparagus officinales, to give it its official name, is a perennial herbaceous flowering plant in the genus of the same name. It is a common edible crop, and perhaps one of the best known perennial vegetables. The young shoots of the plant are typically eaten as a spring vegetable.

Asparagus has been cultivated as an edible crop for a very long time. Pictures of asparagus have been found on Egyptian friezes dating to 3000 BC. Only the young and tender shoots are consumed, since once the buds begin to open, the shoots quickly become woody.

It’s short harvest season means that it has long been viewed as a delicacy, and highly prized. A recipe for cooking with asparagus features in one of the oldest surviving collections of recipes in the world – from the 3rd Century BC.

Asparagus is useful as a vegetable that will return to provide edible shoots year after year. So choosing to plant asparagus is a long-term investment that can continue to add value in your garden for a long time to come.

As a perennial, as mentioned above. Asparagus is a low-maintenance plant, which you can more or less forget about over much of the year.

Asparagus season is a highlight on the local food calendar here in the UK. And since asparagus can be expensive to buy, growing your own at home makes a lot of sense.

Common Varieties for the UK

Some common and highly regarded asparagus varieties for the UK include:

Asparagus favours a sunny and open site, but can tolerate light, dappled shade. It will thrive in light, open soils, that are well drained. While asparagus is not hugely fussy about soil type, in areas with a higher clay content in their soil, or heavy clay soil, may find this a plant that is more difficult to grow. Though even clay soil gardeners can grow asparagus in beds that have been amended to improve drainage with plenty of organic matter.

Asparagus will prefer a soil with a PH in the region of 6.5-7.5, so if you have a more acidic soil, you will find asparagus cultivation more challenging. Liming will usually be required if you wish to grow asparagus on particularly acidic sites. But it may be better to consider other perennial vegetale options.

Asparagus was traditionally often grown in a dedicated asparagus bed. One issue with this, however, is that the bed will be underutilised and will remain free, with bare soil, for much of the year. One great alternative to this is to create polycultures, growing asparagus in the same bed as other plants that require similar growing conditions.

Asparagus can be grown alongside other perennial crops. Or grown within annual vegetable beds. We’ll explore this idea of companion planting more a little later in this article.

Asparagus can be grown from seed. But it is more common to plant asparagus crowns. Asparagus crowds are one year old plants, which are typically purchased and planted towards the end of the dormant period.

Asparagus crowns are usually planted in March or April. They are placed into growing areas that have been well prepared in winter early spring. To prepare for asparagus planting, you should make sure that the bed has been well mulched with organic matter, or that a living green manure or cover crop has been sown to protect the soil and suppress the growth of annual weeds over the winter months. If a cover crop or green manure has been used, the material will be chopped and dropped prior to planting the crowns.

If the soil in the growing area is lacking in fertility, you can consider adding an organic fertilizer such as blood fish and bone to the area in early spring.

To plant asparagus crowns, dig a trench around 30cm wide and 20cm deep. Add well rotted manure or homemade compost to the bottom of this trench, then cover the base with a 5cm layer of the soil that was excavated.

Spread out their roots evenly and replace the rest of the soil, making sure that you leave the bud tips just visible above the soil surface.

If you are making multiple rows, make sure these rows are at least 40cm apart.

Once you have planted your asparagus crowns, mulch well around them with a 5cm layer of balanced, nutrient rich, weed free organic matter.

One important thing to understand about asparagus is that they are either male or female. Male plants produce more spears, and they taste better. So many of the modern cultivars that you can buy are all-male. If any female plants appear, you will be able to identify them easily because they produce bright orange-red berries. Usually, if you are cultivating a male only variety, you will need to keep your eyes open and remove any female plants or seedlings that appear.

Creating polycultures and ensuring good soil coverage with non-competing or minimally competing plants is the best way to reduce the weed growth in an asparagus growing area. Any problem weeds that do pop up must be removed carefully by hand, because asparagus plants have shallow roots that can easily be damaged if you use a hoe.

If a late frost threatens, protect plants with row covers or cloches to avoid frost damage on tender new shoots. Another thing to consider is that asparagus can also be grown undercover in a polytunnel or other undercover growing area. This can bring earlier harvests, and also avoid problems in colder regions.

Asparagus is known as a fairly drought tolerant crop. But the plants will do best if the soil around them is consistently moist, though free draining. In dry conditions, be sure to water regularly during the summer months.

In a less sheltered position, asparagus plants that have grown taller and feathery in the summer might need to be given some support to avoid damage. This support might be provided by other plants in a polyculture, or by man-made twig/cane and twine support structures.

At the end of the summer, asparagus plants should be left to yellow and begin to wither before you cut them down to soil level.

Slugs and snails can be a problem – especially for young asparagus plants. The best way to control these pests in your garden is to make sure there are plenty of natural predators in your garden to eat them. Certain birds, amphibians, and mammals can all be beneficial. So make sure you plant as diversely as possible. And create habitats to attract this wildlife to your garden.

Another common pest species that can plague asparagus is the asparagus beetle. Overwintering beetles can be destroyed by burning old stems at the end of the season. But companion planting may also help, to a degree at least, in preventing an infestation. And again, improving plant and wildlife biodiversity is key for integrated pest management in an organic garden.

One of the best known companion plants for asparagus is tomatoes. The tomato plant is said to be efficacious in repelling the asparagus beetle. And asparagus may aid tomato plants too, by repelling certain root nematodes that can affect tomato plants.

The extent to which companion planting benefits can be proven varies, and often, recommendations are anecdotal. But many gardens report good results from this companion planting combination. In any case, planting tomatoes in the same bed as asparagus can help you make the most of the bed after the asparagus harvest and throughout the rest of the summer season.

Planting basil and parsley around tomatoes and asparagus can also be beneficial. These plants too may help in repelling the asparagus beetle. And will create good ground cover to suppress weeds and retain moisture around tomato plants.

Of course, unlike the asparagus, tomatoes and basil are annually grown crops, and tomatoes should be part of a crop rotation scheme. They should not be grown in the same bed year after year or pests and diseases can build up.

Fortunately, asparagus can also fit in with other crops in rotation. For example, you can sow beetroots, lettuce and other leafy crops between asparagus rows in the spring, then successionally sow lettuce, spinach and other leafy greens beneath the taller asparagus fronds in the summer months.

You can also include flowers in asparagus polycultures – borage, marigolds and nasturtiums, for example.

Asparagus crowns sown in March or April should not be harvested for the first two years after planting, to allow the plants to become established. This may seem a long time to wait. But be patient. Remember, once you do begin harvesting, you can continue to do so for 10-15 years to come.

After the first two years have elapsed, you can begin to harvest asparagus spears for a period of 8 weeks, usually from mid-April for outdoors grown plants. It is best to harvest shoots every 2-3 days in warm weather in order to obtain the best quality spears.

To harvest your asparagus, take a sharp knife and cut spears off just below the soil surface, when they are no more than 18cm tall.

If you have a heavy clay soil, or are dealing with a more shaded site, then asparagus may not be the best perennial vegetable for your garden. Interestingly, there are a couple of different plants that might grow better in your garden that also provide edible shoots, and which are sometimes described as ‘poor man’s asparagus’.

One is Chenopodium bonus-henricus (also known as “Good King Henry”). This is a great forest garden plant, surviving well in dappled shade beneath fruit trees or in other perennial planting schemes in dappled or partial shade. Young shoots can be peeled and used just like asparagus, and young leaves can later also be eaten in moderation.

Hops (Humulus lupulus) can also be grown in partial shade, and hops shoots are a delicacy. When young and green, these too can be sliced off and eaten in exactly the same way as asparagus.