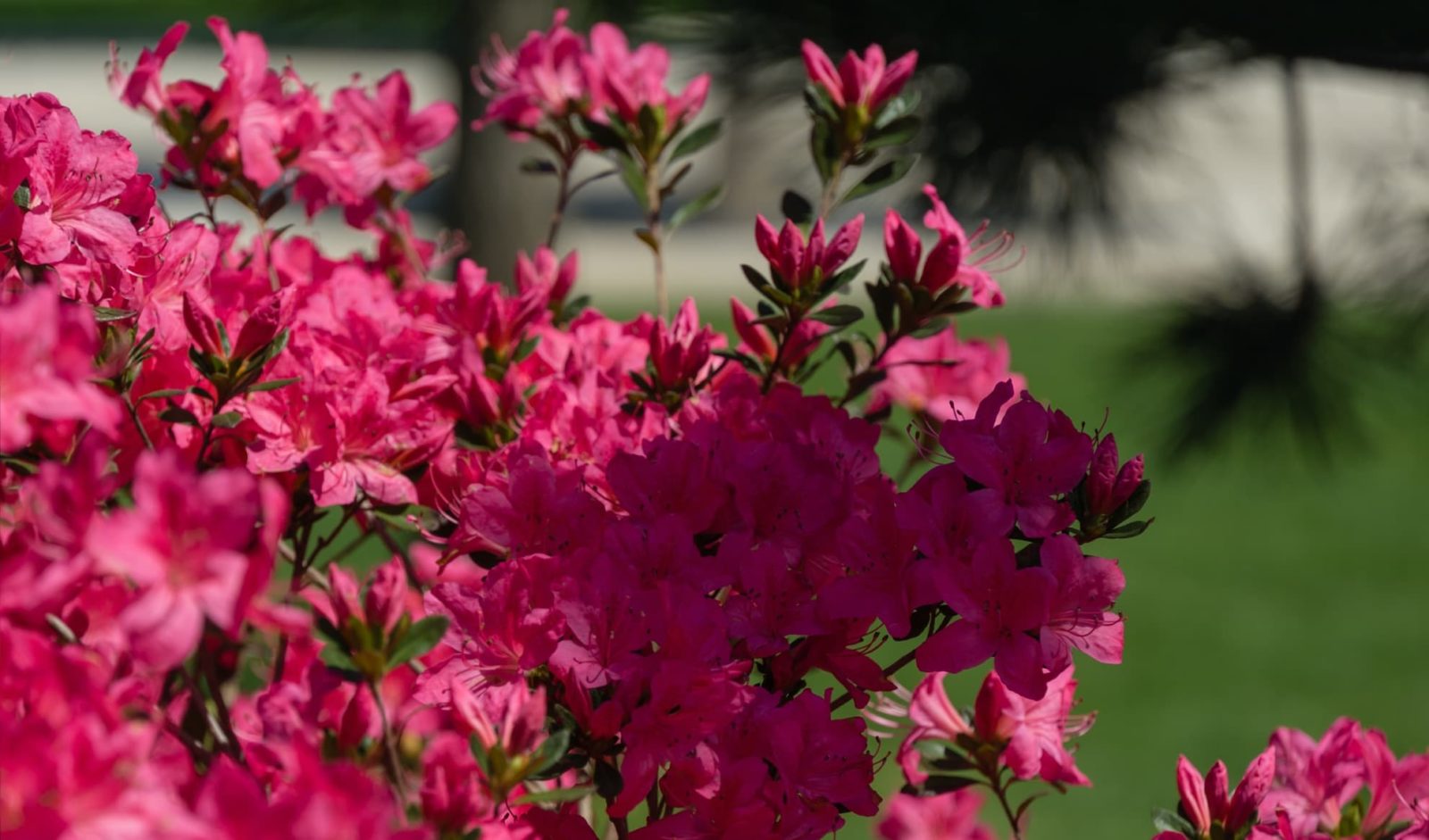 Azalea japonica is a compact Azalea, in the Rhododendron family which can work well in beds or border, or containers with acidic conditions.

In this article, we will take a look at this attractive flowering shrub, share some cultivars to consider, and help you understand how to grow it successfully in your garden.

What is Azalea Japonica?

Azalea japonica, known as Japanese azalea, is a flowering shrub, usually evergreen, with a relatively compact form, glossy deep green leaves, and flowers which come in a wide range of colours.

It is a type of evergreen Rhododendron (though some varietals can be semi-evergreen and lose leaves in cold winters), within the Ericaceae plant family. They have smaller leaves than deciduous rhododendron.

Azaleas have been cultivated for centuries and more than 10,000 vibrant cultivars have been created, which means that there are plenty of options to consider when choosing one of these plants for your garden.

Azaleas are important in Japanese culture and Azalea festivals take place across the country each year, which are attended by many visitors.

The plants are a common sight in Japanese (and Japanese inspired) gardens around the world. Azalea japonica are sometimes also used for bonsai, carefully and delicately trained, and sometimes used as container plants or even houseplants.

Why Grow Azalea Japonica in your Garden?

Azalea japonica are ideal for a low maintenance garden. They are one of the most vibrant spring-flowering shrubs that can be grown in the UK, and provide their beautiful blooms for several weeks in April, May or June.

Because of their spring flowering, they are also popular gifts for Mother’s Day and Easter.

These are a popular range of shrubs for acid-soil gardens, since these are ericaceous plants that like a more acidic soil pH. They can help you make the most of a garden with acidic soil conditions.

Even where there is not acidic soil, these small shrubs are pretty easy to grow in pots.

There are a huge range of Japanese Azaleas to choose from. Some types to consider include:

Some interesting cultivars to consider include:

Though of course there are many, many more Japanese azaleas to consider.

Where to Grow Azalea Japonica

One interesting thing to note is that Japanese Azaleas help purify indoor air from ammonia – from pet urine or household cleaning products. So this could be a good houseplant to consider growing in a container inside your home.

Many more compact cultivars are perfect for container growing, indoors, or outdoors with winter protection.

However, many Japanese Azaleas can also be a great choice for a UK garden. Many cultivars are H4 hardy, but take note that there are many Azaleas which are not as hardy and which are only options for outdoors cultivation in very mild and protected southern gardens.

Hardier cultivars will grow well in a fertile, rich, sandy or loamy soil which is moist and relatively moisture-retentive without becoming waterlogged.

They will thrive in a sheltered spot, in partial shade or full sun. Whether it is best to grow Azalea japonica in full sun or partial shade will depend on your location, and the type and cultivar you have chosen to grow.

Of course, the most important thing to remember is that, like other ericaceous plants, Azalea japonica does require acidic soil. The optimal pH is between 5 and 6 for most Azaleas.

Japanese Azaleas can work well in a planting scheme alongside other Azaleas, Rhododendrons, and Camellias.

By selecting cultivars carefully you can enjoy blooms over a much longer period – some can even work well as hedges. With Japanese Acers and other Japanese plants which like acidic conditions, they can be perfect for a Japanese inspired garden.

When planting Azalea japonica, it is important to take care not to damage the roots.

It is also important to plant the shrubs at the same level that they were at in their previous pot. Avoid planting them too deeply as they are intolerant of this.

The top of the root ball should be above the soil – take care to ensure that this is not buried or the Azalea may fail to thrive or even die.

If growing Japanese azaleas in containers, make sure you choose a container that is of a sufficient size, and one which allows free drainage.

Place crocks at the base to make sure water can pass through freely. Of course, you also need to make sure that you fill your container with ericaceous compost.

Azalea japonica are varied plants and some are much easier to care for and lower maintenance than others.

Once established, hardy types in your garden can be more or less left to their own devices. Less hardy types grown in containers, or indoors, will require a little more care.

Once established, most Japanese Azaleas can be relatively drought tolerant.

However, it is very important to water well during establishment, and to make sure that the soil (or potting mix in containers) does not dry out during dry spells.

When Azaleas are subjected to drought, they tend not to flower as well. Since they are shallow-rooted, they do need the soil to be kept moist.

Remember that you will have to water container-grown plants more frequently than those grown in the ground.

To protect the shallow roots of these shrubs, and to reduce moisture loss, it is a very good idea to mulch well around your plants.

Choose an ericaceous mulch such as pine bark or pine needles to do so.

Mulching will also provide all the fertility Japanese azaleas need.

It is not usually necessary to provide any other fertiliser for these plants. In fact, fertilising too much can be counter-productive and these shrubs may not perform as well if you do so.

Azaleas typically only need light pruning and Japanese azaleas may not really need to be pruned at all. As mentioned above, however, some azaleas are used as bonsai, and trained and trimmed into ornamental, decorative forms.

If light pruning is required, this should typically be undertaken just after the end of the flowering period.

Make sure you do not prune after buds for next years flowers begin to form as this would mean fewer flowers the following year.

There is more to discover about Japanese azaleas. But this guide should help you with the basics of choosing and growing these beautiful flowering plants.