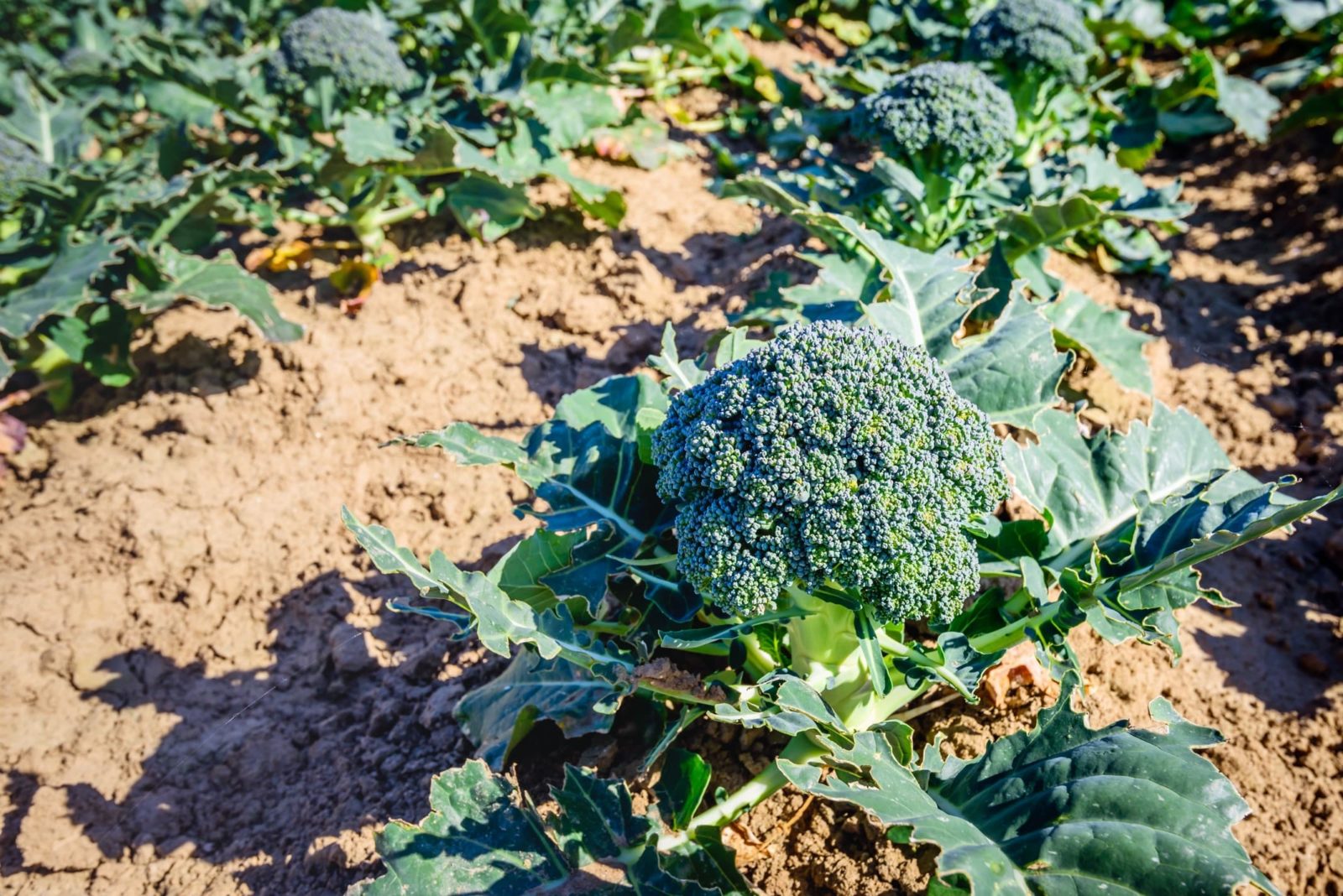 Calabrese is the proper name for what most people think of as broccoli here in the UK.

There is a lot of confusion over the name. But those vegetables with large green heads that look like little trees are a specific type of broccoli known as Calabrese.

Calabrese are sown in spring and harvested over the summer. Sprouting broccoli, on the other hand, is planted one year, overwinters, and provides its yield not in its first season but the following year.

Sprouting broccoli has many smaller florets, rather than one central initial head. These are often purple or white in colour.

Both the plant referred to as Calabrese in the UK, and broccoli that overwinters are Brassica oleracea. Both Calabrese and sprouting broccoli are in a cultivar group called ‘Italica’ within that species. Cauliflower and Romanesquo also belong to this group.

Many other brassicas that we grow as garden crops in a vegetable garden, including kale, collard greens, cabbage, Brussels sprouts and kohlrabi belong to different cultivar groups within this species.

As a European preference emerged for eating the immature buds of Brassica oleracea, selection for inflorescence began in around the 6th Century BCE. A primitive cultivar was enjoyed by the Romans. Records from the 15th Century show that early headed types of broccoli (and cauliflower) were found through Sicily and Southern Italy at this time. Though it is believed that these may not have been resolved into unique cultivars until around 100 years later.

Calabrese, what we most typically think of as broccoli today, is named after Calabria in Italy. It is a plant which grows up to 60cm in height, and produces green heads up to around 15cm across.

While there are also plenty of great reasons to grow sprouting broccoli in your garden, Calabrese is easier for beginners, quicker to crop, and is a staple of home growing in cool temperate climate zones.

Once you have decided to grow Calabrese at home, the first thing you need to think about is which particular named cultivar of Calabrese broccoli you would like to grow.

Named cultivars of this type of broccoli in the UK include:

Where to Plant Calabrese

Calabrese is best grown in a fertile growing area in full sun or very light shade. The soil should be moisture-retentive yet reasonably free draining.

Before planting out Calabrese, make sure you have enriched the growing area with plenty of good quality compost or well-rotted manure.

When to Sow Calabrese

Broccoli can be sown any time between March and June. Earlier sowings (before the last frost date in your area) are made in seed trays or modules indoors. It is usually best to sow into pots before transplanting outdoors. But after the last frost date, you can also direct sow directly into your vegetable garden.

Be warned that direct-sown seeds and tiny seedlings will be very vulnerable to being eaten by birds, rodents, or slugs and snails. It is usually easiest to start seeds indoors before transplanting the seedlings into your garden.

When sowing indoors, sow seeds in trays, or in modules, soil blocks, or small pots. After the seeds have germinated (which should only take a week or so), thin out the seedlings to leave one in each module, block or pot. Once the young plants have grown to around 10-15cm tall, and have established good root systems, you can plant them out into your garden.

If you do decide to direct sow, it is typical to leave around 45cm between rows, or to grow one Calabrese in each square foot of space in a square foot gardening bed.

Sow three seeds at each station, around 2cm deep, then thin to leave one healthy plant at each. Plants should typically be at least 30cm apart. Closer spacing will typically result in a smaller yield.

If you have sown some Calabrese, or are thinking about doing so, it is also a good idea to think about which other plants to include in the same growing area.

Companion planting can help you make the most of your space, and can increase the yield you are able to achieve in your vegetable plot.

Calabrese can grow well alongside other brassicas, and including your brassicas in the same bed can make it easier to rotate your crops. We’ll look at crop rotation a little later in this article.

But in addition to growing other brassicas, you should also consider adding other plants which work well, and which will aid the Calabrese and help enrich biodiversity in your organic garden.

Other common crops which will work well alongside your Calabrese broccoli include:

Keep Calabrese away from asparagus, sweetcorn, squash, and other heavy feeders, which will compete too much with your broccoli plants.

Also keep brassicas away from tomatoes and peppers, since these can attract verticillium wilt, which can spread to damage your Calabrese.

Some gardeners also report that radishes do not do very well when planted near brassicas like Calabrese.

Mulching is an important part of organic gardening, and it is particularly important when growing ‘hungry’ plants like Calabrese broccoli.

Choosing the right mulches for the right crops is important. When it comes to brassicas, and other nitrogen hungry plants, a green, nitrogen-rich mulch can work wonders. For example, grass clippings (especially from lawns rich in clover), or other leafy green material can make a good mulch to lay between your Calabrese.

As this leafy material breaks down, it will give the brassicas the nitrogen they need. Of course, you can also mulch around brassicas with homemade or commercial compost, leaf mould or well-rotted manure.

Annual brassicas like Calabrese are one of the crops that are best rotated between different growing areas.

When brassicas are grown in the same bed year after year, diseases such as clubroot (a fungal infection that can destroy brassicas by infecting their roots) are more likely to take hold. Clubroot can also be avoided by making sure that the soil is slightly alkaline (using lime to raise pH if necessary), and by avoiding waterlogging and compaction.

Brassicas will appreciate it if they are placed in a crop rotation following peas, beans or other nitrogen fixers. They are often followed by potatoes in a four-year rotation, and the potatoes are then followed by alliums (onion family) and root crops.

One of the most problematic pests for Calabrese broccoli are birds like pigeons, which can quickly eat a whole crop if it is left unprotected. Where this is a problem, it is a good idea to cover your Calabrese with cloches, row covers, or mesh.

Caterpillars, particularly those of the cabbage white butterfly, are another common problem for Calabrese and other brassicas. [source]

Again, covering your crop carefully to avoid the butterflies laying their eggs is the most effective strategy to avoid this issue. Placing decoy butterflies (made from white plastic, for example) is said by some to help, and companion planting can also aid in keeping down pest species to a degree. But a physical barrier is really the only sure-fire way to keep your brassicas safe.

Calabrese is harvested by simply cutting the main central head off the plant with a sharp knife. But do not remove the whole plant right away. Leave it in place and smaller florets will form, which can be harvested over the next month or so.