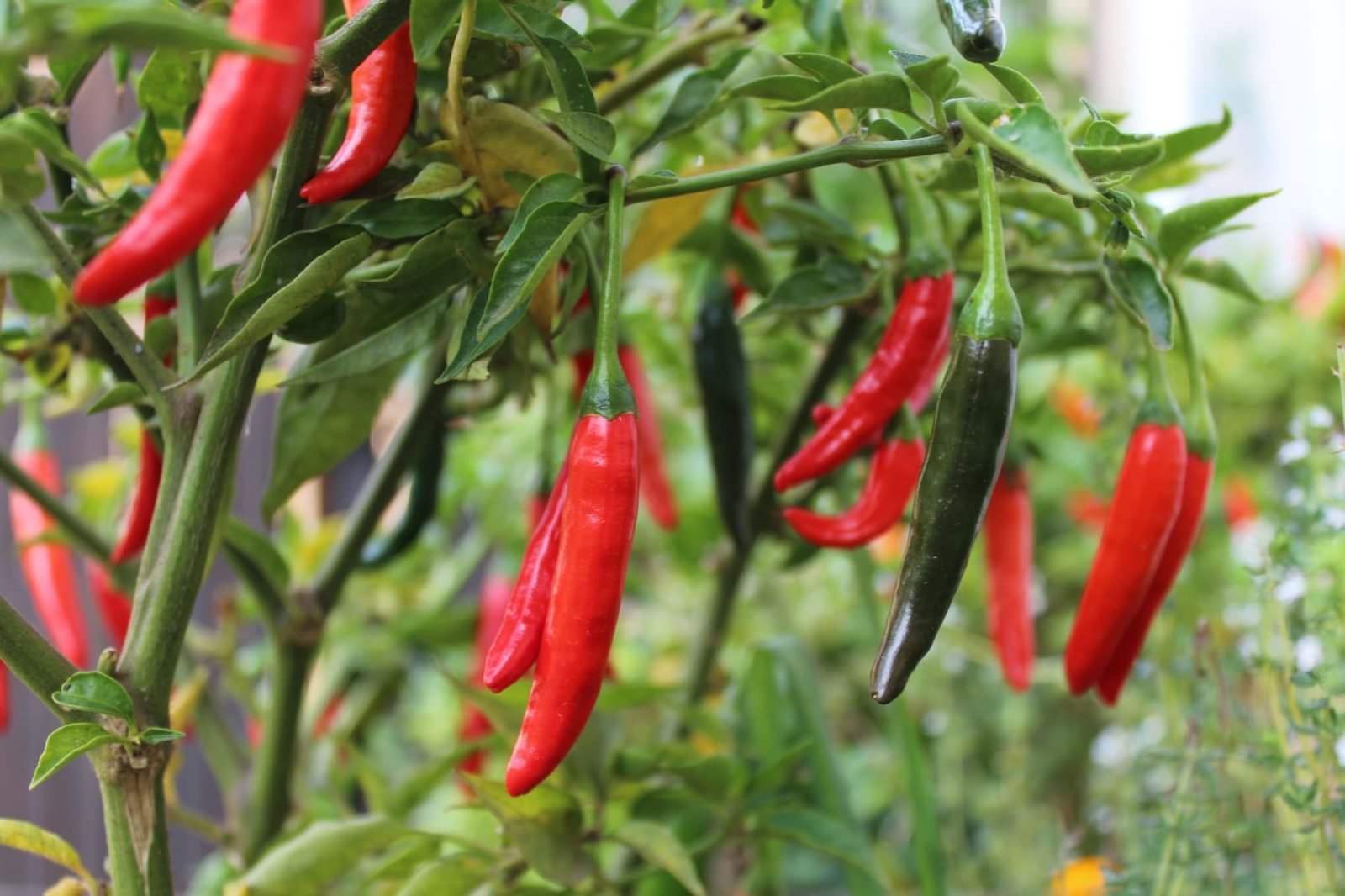 8 Winter Flowering Bulbs (And When To Plant Them)

If you like heat in cooking, Cayenne peppers could be a good crop to grow.

Learn more about these peppers and how to grow them in this guide.

What Are Cayenne Peppers Plants?

Cayenne peppers are a type of chilli pepper, Capsicum annuum.

It is related to other peppers including jalapenos, pimientos and bell peppers.

As part of the Capsicum genus, these peppers are all within the Solanaceae or nightshade family, which means that they are also more distantly related to tomatoes, potatoes, aubergines etc.

These plants are named after the French Guiana city of Cayenne. They are a short-lived perennial in subtropical and tropical climes. But in temperate climate zones, are usually grown as an annual crop.

The fruits of these plants are mostly skinny and red, with a curved tip, though there are also some yellow and purple fruited cultivars.

These fruits hang from the bush rather than growing upright like some other chilli pepper varieties. There are a number of different named cultivars of Cayenne peppers, which are prized for their spiciness and flavour.

While most Cayenne peppers are moderately hot, there are some milder variants.

The fruits are usually dried and powdered to create cayenne powder, which is used as a herbal supplement, in pest control, and in many spicy dishes.

However, cayenne powder may also be a blend made up of several different chilli peppers.

Growing spicy chilli peppers is a must for those who like heat in their cooking.

Being able to grow your own Cayenne peppers for Cayenne powder and spicy dishes can save you money, and reduce food miles to cut your carbon footprint, of course.

Cayenne peppers may also repel certain insect pests while in active growth. And the powder is sometimes sprinkled as a deterrent to rodents around winter or early spring crops.

Where To Grow Cayenne Peppers

Cayenne peppers are typically grown in climates much warmer than our own.

To grow them successfully here in the UK, you will usually have to grow them indoors or undercover in a greenhouse or polytunnel.

Though this species can tolerate a little light frost, they will not normally do well outside in a typical British summer.

Occasionally, however, in warmer, southern parts, it may be possible to grow outdoors in a very warm, protected and sheltered spot.

Cayenne peppers, like other peppers, grow best in a moist yet free-draining sandy or loamy soil, which is slightly acidic.

They can also be grown in pots as long as these are filled with a moist yet free-draining, relatively fertile growing medium.

Peppers can also be planted alongside tomatoes but only when many other companion plants are included in a scheme, to aid with pest control, and as long as a good crop rotation plan is implemented.

Like other peppers, Cayenne peppers are best sown indoors in the UK early in the year to ensure a worthwhile crop by the end of our relatively short growing season.

The challenge with this is that you will have to make sure that you provide enough heat for seeds to germinate.

You will also need to ensure that the indoors grown seedlings get enough heat, water and light before the weather warms and you can move them to their final growing position (perhaps in a greenhouse or polytunnel).

As a rough rule of thumb, pepper seeds, along with tomato seeds, are usually sown around 6-8 weeks before the last frost date in your area.

Remember, a greenhouse or polytunnel may be reliably frost-free a few weeks before the rest of your garden. So you may be able to sow a little earlier if you will be growing undercover.

It is important to make sure that you provide high enough temperatures for germination to take place.

Pepper seeds typically need temperatures between 18 and 35°C for the best germination rates, and will not usually germinate at all if temperatures fall below 16°C.

It can be a good idea to use a heated propagator, or to provide some gentle bottom heat to ensure that you get the best results when sowing seeds.

After sowing your seeds in a suitable seed starting potting mix, the seeds should germinate within around 2-3 weeks.

Seedlings can become leggy in low light conditions, so it may be beneficial to use grow lights when sowing early indoors. Prick out the pepper seedlings once they become large enough to handle, then place them into their own individual pots.

Water your Cayenne pepper seedlings consistently but do not overwater – keep them in as bright a spot as possible until you can harden off your young plants and, if not continuing to grow indoors, plant them out into your greenhouse or polytunnel.

Hold off placing your Cayenne Pepper Plants into a greenhouse or polytunnel until you are certain that all risk of frost has passed (at least within the structures).

If a late frost or cold temperatures are suddenly forecast, you can consider protecting the plants with additional cloches or row covers.

If growing in the ground or a raised bed, peppers should be planted around 40-60cm apart in a row, or 1 per square foot in a denser polyculture planting scheme – though these spacing suggestions are just guidelines and spacing can differ depending on your specific approach.

Be sure to consider companion planting and crop rotation when deciding where to place your peppers. And protect the soil around the plants by mulching around your planted peppers with an organic mulch.

A mulch of balanced homemade compost for example, will get your Cayenne peppers off to a good start.

Cayenne peppers must be cared for carefully and like other peppers, can be rather fussy plants.

One key thing to remember is that the temperatures in the growing area must remain consistently above around 16-18°C for optimal results.

You need to aim to provide as much sun and warmth as possible to reap a good harvest.

Inconsistent temperatures can easily cause checks in growth and a range of physiological issues.

Another very important thing when it comes to caring for Cayenne peppers is water.

The soil or growing medium must be kept consistently moist. But overwatering can also cause issues.

Issues with watering are often the cause of problems with a pepper crop.

Like other peppers and tomatoes, Cayenne peppers will benefit from the slow-release fertiliser (and moisture control) of an organic mulch.

Feeding with a comfrey tea or other potassium-rich liquid feed during flowering and fruiting can also be beneficial – especially when growing Cayenne peppers in containers.

Aphids and scale can be common problems with pepper plants, especially those grown indoors or undercover.

If growing indoors, it will be challenging to get rid of these through natural predation, though in a greenhouse or polytunnel, make sure the doors are open and you are attracting ladybirds and other beneficial insects to the space.

With an extreme problem, you might consider using biological controls.

Make sure you are watering correctly, and reduce high humidity by avoiding overcrowding and improving ventilation.

Cayenne peppers will usually be ready to harvest from around 70-80 days after sowing, though of course this can vary depending on the precise conditions.

Generally, you may begin harvesting ripe fruits around midsummer and can often continue to do so well into autumn.

With Cayenne peppers, unlike with some other chilli peppers, you will not usually harvest the fruits at an immature stage but will wait until they are fully red (or reach their final colour for other varieties).

You can then dry your Cayenne peppers in a dehydrator or in your oven – and grind the dried fruits into a powder that can be used in a wide range of different recipes.