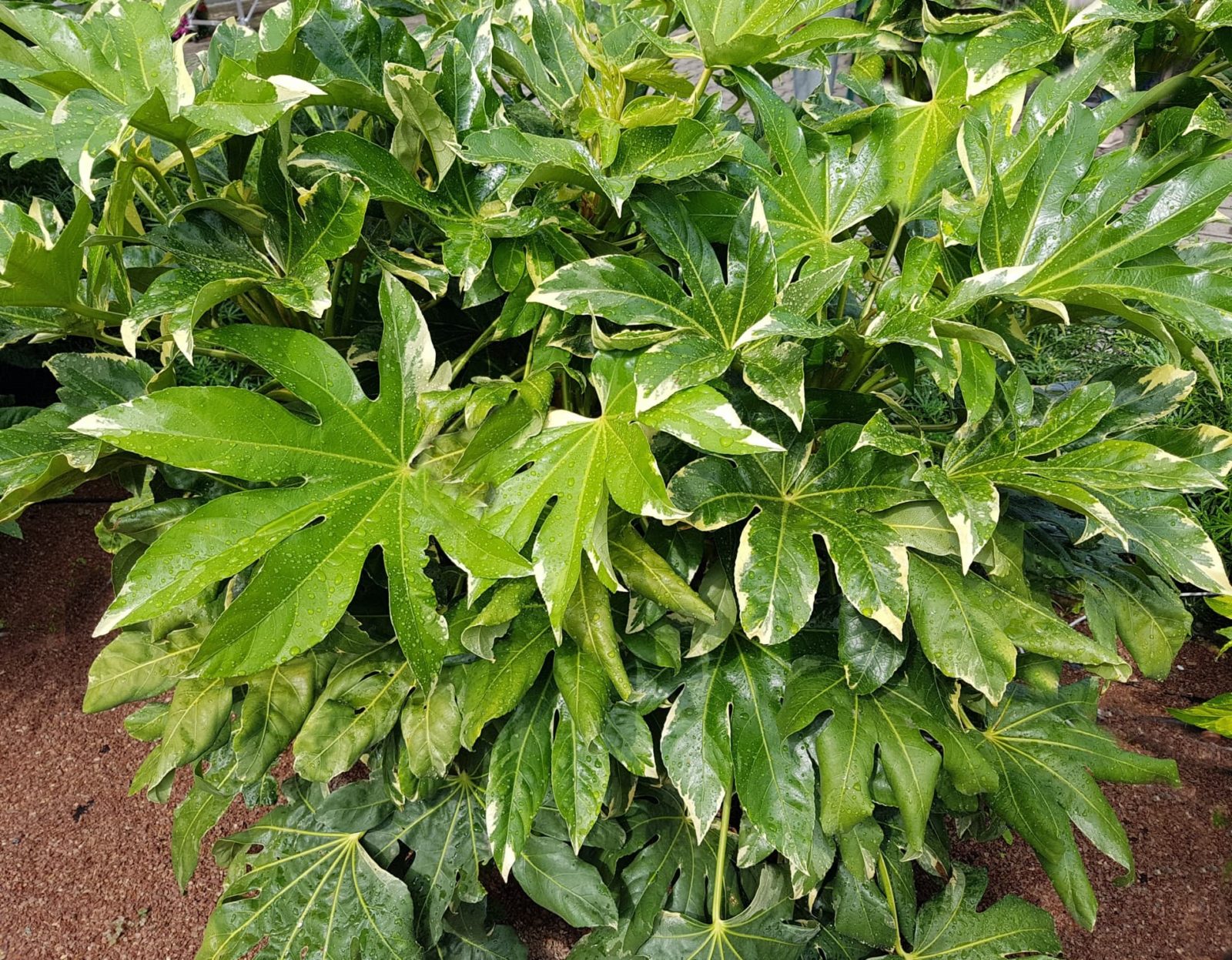 Also referred to as the Fig Leaf Plant or (wrongly) the False Castor Oil Plant, Fatsia Japonica – as its name suggests – originated in Japan (and South Korea). And, although it wasn’t introduced to Britain until the 19th century, gardeners here have made up for it since.

Much beloved of such TV gardening celebs as Alan Titchmarsh, the plant is very popular in Britain and highly praised for both its exotic looks and its toughness. This hardy garden favourite is even fine with snow – provided the powder is brushed off its leaves after the odd heavy flurry.

Fatsia Japonica has large green, shiny, leather-like leaves. When it’s flowering, the plant produces clusters of ball-like, white blooms at the tips of stems. It can actually grow to as high as 10 ft tall, but the usual bush height is approximately six ft high.

Once you start researching, you’ll find Fatsia Japonica has many varieties. Some of the most popular include Variegata, Spider’s Web, Annelise and Moseri. And here’s a quick run-down of them here:

In this article, we will discuss the best way to plant and propagate Fatsia Japonica, as well as look at feeding and pruning this fine plant – everything you need to know, in order to grow an extremely healthy specimen. And it’s one which we’re sure you will have around for years, if not decades, such is the plant’s hardiness.

When it comes to growing Fatsia Japonica you can bet your current soil, is probably just fine. That’s because this most non-demanding of plants will grow in heavy clay soil, light soil and even soil mixed with chalk. It will also do well in areas of your garden where there is hardly any shade, such as under a tree.

Another big plus of this plant? It will enhance your garden all year round – there are not many plants you can say that about. So, where’s the catch? Well, there isn’t one really, except most varieties will grow too fast so that you will really have to keep an eye on it in order to prune it back when it gets that bit too unruly.

The best time to start pruning this plant is really towards the end of spring. Simply remove the summer-burnt leaves, as well as any shoots which look as if the winter frost has done its worst to them. At the same time remove any bare stems.

You will probably have to prune back quite a bit of the bush in order to leave enough space for next year’s growth. Do so by cutting back the old stems first ie down to ground level. This will give them an opportunity to regrow in a healthier manner. Cut back the rest of the bush by around two feet but do try and retain the shape of the bush. If it is centre-heavy, for instance, then cut back in the centre to as much as ground level. That way you will allow air to get into the rest of the stems.

After you have pruned the bush there’s no harm in adding a little nourishment to the plant in the form of blood fish and bone or any king of organic fertiliser you can find.

With a new plant, the best time to put it in the soil in your garden is in the spring. That way the roots will have had plenty of time to strengthen and grow so that the winter frosts don’t pose too much of a problem. It’s fine to plant in the autumn too, provided the soil is still warm enough. Just make sure you get the right spot in the first place though since this is a plant that definitely doesn’t like to be transplanted!

The location should be shaded and not directly in the face of cold winds. The hole for the root ball to sit in should be around six feet big as it will get bigger as it grows. In other words, you’ll need around the double the size of the hole as the root ball itself.

Add some organic fertiliser or blood, fish and bone into the hole for nourishment. Make sure the root ball is buried well and the soil firm before you add water. The plant should also get plenty of water as it grows. Be careful not to add too much water though – otherwise it may drown or be struck down with fungal disease.

If your plant is in a container then remove the top two inches of soil annually and replace it with a fresher version. You’ll probably need to move it to a bigger pot in around two to three years’ time.

Fatsia Japonica doesn’t need a lot of looking after or nurturing. Provided it’s not in direct sunlight, the plant is actually pretty much self-sufficient. If there’s a drought in the summer it could do with a little watering and some fertiliser during spring and autumn doesn’t do any harm either.

Watch out for particularly chilly winters. Too much cold and the leaves may start to fall off or, in some cases, turn black. If they’re black don’t pick them off as they will turn green again once the sun comes out and it gets warmer in your garden. And on this note, you may notice some leaves turning yellow and falling off in late summer. That’s perfectly normal and these will be replaced with new stems and leaves when spring comes around.

One of the best – and simplest – methods of propagating Fatsia Japonica is to layer it. What we mean by this is that you allow the plant to root before taking a cutting. In this way, it is being nurtured as it grows.

To get a good cutting, pick a stem that reaches the ground and cut it halfway through at this point (ie where it reaches the ground). You then put the stem in the soil, along with a stick tied to the branch so that it will continue to grow upright and off the ground. The best time to take cuttings is in the summer.

Container pots should have compost and grit for drainage, while holes can be made for the cuttings to stand in using a pencil. The soft tip should be removed from the stem and the remainder divided into six-inch-tall cuttings. Take away the lower leaves from cuttings, as well as large leaves. Before planting put the base of each cutting into a rooting hormone powder.

Cuttings should then be put into pots of around two inches deep. These should be covered with a plastic bag, which is tied in place with an elastic band to increase humidity for the roots. Place in a cool spot out of direct sunlight. Water the plants every week by removing the plastic band and allowing the plant some air.

The berries are fine to take once ripe. Just take the seeds and put into a seed tray with moist soil. They will germinate if exposed to the soil and the soil kept moist. Pot them up individually when they develop leaves and keep them in a greenhouse over the winter months until they become a bit hardier and the weather itself gets warmer.

Like most plants Fatsia japonica can be prone to an aphid infestation, however, this can be gotten rid of by means of a good spraying with a soap and water mix. The Capsid bug can also be a pain since this will eat through the new leaves and affect the flowers. This can be stopped with the use of an insecticide or by simply removing nearby weeds which could potentially be playing host to the bug. Finally, in terms of bugs and other insects, the caterpillar will also go for your Fatsia Japonica. Simply pick this off and place far away from the plant in question.

Fungal infections can spring unexpectedly and result in blotchy looking leaves. To prevent infections spreading always allow plenty of air circulation between plants. You can achieve this by weeding out anything getting in the way of your plant and by removing branches which appear to be clogging up others. Try to avoid the leaves being wet too.

Shot hold disease is another fungal infection and which this time leads to holes in the leaves. Remove affected leaves and disinfect your shears to avoid spreading the disease. Feed and mulch the plant to give it as much nurturing as possible.

When should I plant Fatsia Japonica?

It should ideally be planted in the spring in order to allow the roots to get established in the soil before the first frost arrives. They can also be planted in warm soil during the autumn months.

Can I grow Fatsia Japonica in a container?

Yes, you can grow the plant in a container. But, like growing it in the garden, it has to be fed regularly between March and August to help it thrive. Regular watering is also a must. Get a big container (around 60cm wide) and fill with multi-purpose compost. Repot after two to three years when the plant has increased in size.

What is eating the leaves of my Fatsia Japonica?

Fungal infections such as Shot Hold Disease can lead to holes. Take a look at our section on Diseases and Problems to find out how to get rid of this.

If the shoots of my Fatsia Japonica are damaged by frost should I just throw it away and start again?

Not at all! Leave it to perk up again once the warmer weather comes around. That will help it grow new shoots. Don’t even touch the damaged stems until winter is well past.

I have a Fatsia with yellow leaves. What am I doing wrong?

Is your plant in an area that’s either partly-shaded or fully-shaded? This plant really hates direct sunlight and shows its displeasure via yellow leaves. Then again, a Fatsia which is overwatered will also produce yellow leaves since this washes away many nutrients in the soil.