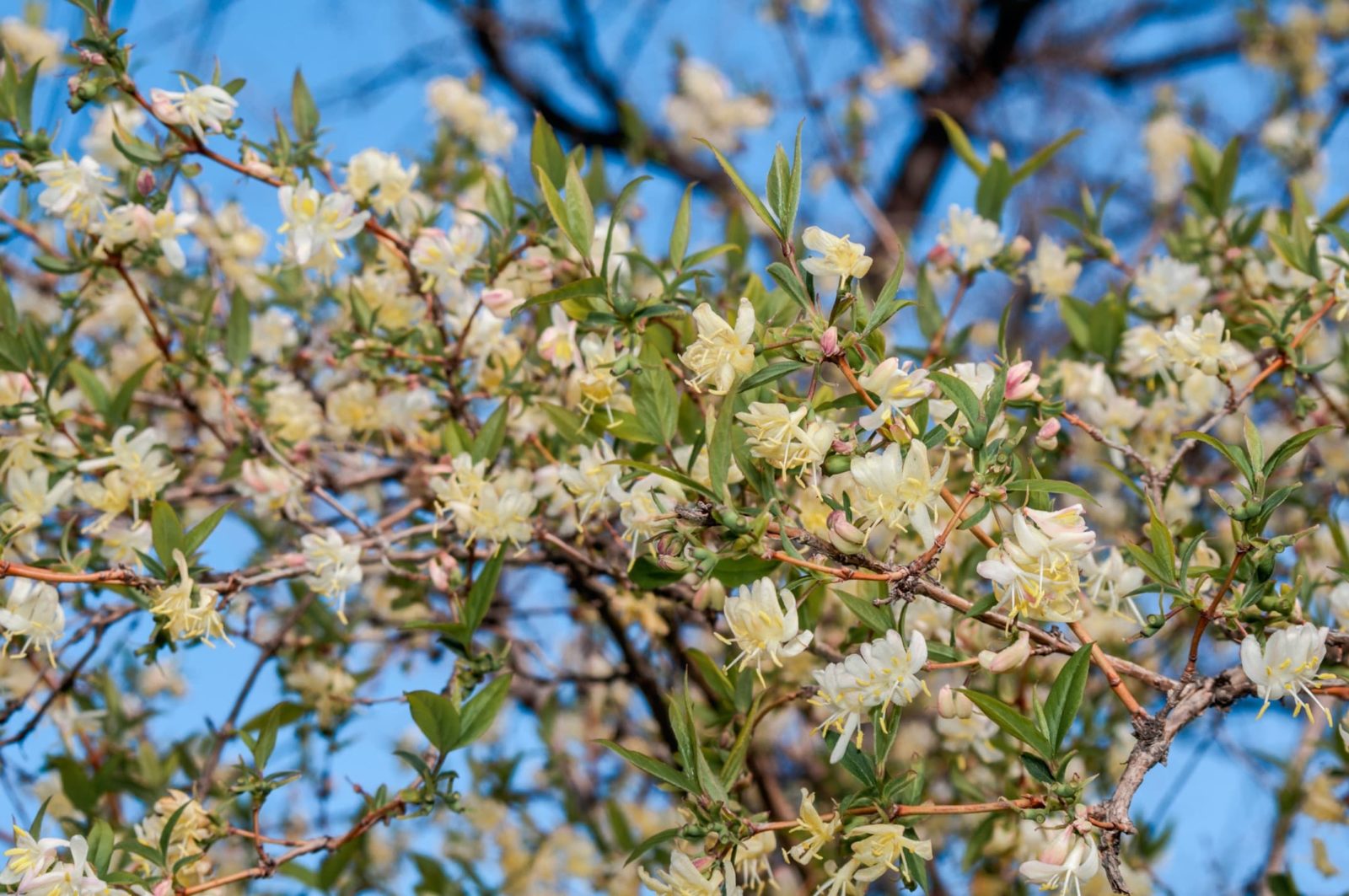 You may not know it by its proper name, Lonicera, but you’ve almost certainly heard of its more common moniker: honeysuckle.

This deciduous or evergreen climber is widely grown in the UK, and is often associated with quaint country cottages and romantic archways.

Honeysuckle is well-known for its fragrant, tubular flowers which appear in clusters, often for the duration of summer. The blooms come in a range of colours, including yellow, orange, red, pink and white, and give way to brightly coloured berries in the autumn.

This pretty and popular plant is easy to grow in the UK and offers big rewards for little effort. If positioned, grown, and trained correctly, it makes a quick and attractive way to cover a fence or garden wall. Choose an evergreen variety, and you’ll benefit from year-round foliage.

If you want to add honeysuckle to your garden and create idyllic escape-to-the-country vibes of your own, take a look at this care and growing guide, which contains everything you need to know about this sweet-scented climbing plant.

Lonicera honeysuckle is part of the Caprifoliaceae family and originates from North America and Eurasia. It most commonly flowers from early summer to early autumn. The blooms can be one colour or multi-coloured, and either fragrant and scent-less. The plant then produces berries, which are red, blue or black in colour.

Honeysuckle can be deciduous, semi-evergreen or evergreen, depending on the variety. Deciduous species tend to put on a more spectacular display in the flowering season, but evergreen variants provide foliage cover year-round.

There are over 180 varieties in the Lonicera genus. Well-known varieties include Lonicera japonica Halliana (Japanese honeysuckle) which is an evergreen climber and produces sweet-scented white flowers from May to August – and Lonicera sempervirens, which has fragrant orange-red, trumpet-shaped blooms. Lonicera fragrantissima (winter honeysuckle) blooms from January to March.

Not all honeysuckles are climbers – some are shrubs or bushes. Some species of honeysuckle, including Lonicera japonica, are also considered invasive outside of their native range, due to their aggressive growth and dense foliage, which can crowd native plants.

Other names for honeysuckle are woodbine – which refers to Lonicera periclymenum, and indicates that this variety used to grow in woodlands – and twinberry, which is a reference to the way the flowers often grow in clusters of two.

Honeysuckle is a great way of encouraging more wildlife into your garden. The strong scent attracts pollinating moths at night, the white admiral butterfly relies on it for food as a caterpillar, dormice find shelter in its foliage, and the berries are attractive to many birds.

The best time to plant honeysuckle depends on whether you’ve chosen a deciduous or evergreen variety. Deciduous species should be planted in late winter, whilst evergreens flourish best when started in spring or autumn. Refrain from planting in waterlogged or frozen ground.

Honeysuckle is a generally a hardy plant, but thrives best in partial shade – it can cope in full sunlight, but may suffer from scorched leaves. Similarly, it can survive in fully shaded areas, but it will probably not produce flowers.

The plant prefers free-draining, damp soil, that is neither too dry or waterlogged. Add mulch to the soil once planted, and every spring thereafter to improve soil quality, prevent dry roots, and reduce the risk of powdery mildew. You can also use a general fertiliser annually.

Regular watering is required during the plant’s first year of growth, but once it is established, it will only be necessary during particularly dry periods, or hot summers.

You will need to provide honeysuckle with suitable support in order for it to climb. This could be a wall, fence or archway, and there will need to be fixed wires or a trellis just in front of the wall, onto which you can tie the limbs during the initial growing period.

Honeysuckle’s native habitat runs across the northern latitudes, from North America to Eurasia. Many varieties are found in hedgerows and woodland environments, where they grow in dappled shade, protected by trees.

The roots in particular favour moisture and shade, as too much sun can lead to them drying out, and cause powdery mildew. However, honeysuckle’s climbing stems and shoots seek light and warmth, and will reach towards the sun.

The first time you should trim your honeysuckle shoots is upon planting, to encourage strong new growth which you can tie to your trellis or support structure. Aim to cut back around half of the existing growth at this time.

From then on, prune your Lonicera honeysuckle annually, to keep it in shape and prevent it from taking on an overgrown appearance (take care not to dislodge any nesting birds).

The best time to prune depends on the variety of honeysuckle. For species which flower early, prune after flowering, cutting back the flowering shoots by a third. Do not remove the dying flower heads, as this will discourage autumnal berrying.

For late flowering varieties, prune in spring, before flowering. Stick to a light pruning, so as not to reduce blooming. Remove any damaged shoots, and gently thin out bushy areas to create a more coiffured appearance.

When To Cut Back Honeysuckle

You may need to completely cut back honeysuckle that has become overgrown and out-of-control, or a plant that has bare branches at the bottom and a congested top, which cannot be thinned out. Congested growth is a common cause of powdery mildew, as it restricts air circulation around the plant.

To re-start a particularly congested honeysuckle, prune it back hard in late winter to around 60cm. Give it a mulch and a good watering, and the honeysuckle will respond with strong new shoots in spring, which you can then train to a trellis. It should start to flower again in a couple of years.

Honeysuckle is widely available in the UK, and can be purchased from most garden centres, nurseries or from a wide array of online retailers – it is even available on Amazon. Plants are available to purchase year-round and usually come in pots with canes, to support the stems.

Ideally, shop in a physical store, so that you can choose a plant that looks healthy with no visible signs of disease, and at least 2 strong shoots coming from the base, which you will be able to tie to a trellis.

You can also purchase or harvest honeysuckle seeds, although these will require refrigeration for 1 – 3 months prior to planting, in order to germinate. After planting, keep the pots at around 15°C until the seeds begin to sprout.

Honeysuckle is generally a hardy plant and does not suffer from many common pests or problems. There are, however, a few to watch out for, including powdery mildew and aphids.

Powdery mildew is a fungus which causes the leaves of the honeysuckle to turn grey and curl. It usually occurs when the root system becomes too dry during hot weather. For this reason, it’s important to add mulch to the honeysuckle’s soil, to encourage moisture retention. This is particularly true if your honeysuckle is growing against a wall, as the soil there tends to be drier.

Check your plant regularly for visible signs of aphids – they are usually easily spotted in spring. Small amounts of aphids can often be wiped away using a cloth or washed off with water.

Severe infestations may cause leaf distortion and sooty mould. Prune infested shoots, and if necessary, use an insecticide – although this should always be a last resort, as it can be severely damaging to wildlife and pollinators, such as bees.

Some varieties of honeysuckle are evergreen, whilst some are semi-evergreen, and others deciduous. There are some species that are deciduous in cooler climates, and evergreen in warmer zones. An example of an evergreen honeysuckle is Lonicera japonica Halliana (Japanese honeysuckle).

When does honeysuckle bloom?

This depends entirely on the variety – some early-flowering honeysuckle species bloom in late spring/early summer, whilst late-flowerers can hang on until the end of autumn. Some varieties, such as Lonicera fragrantissima, even bloom in late winter, from January to March.

If you want your garden filled with honeysuckle blooms for as long as possible, one of the best varieties to choose is Lonicera periclymenum ‘Graham Thomas’, which flowers beautiful cream-coloured blooms all summer, followed by bright red berries in autumn.

How can I take cuttings of honeysuckle?

You can take softwood and semi-ripe cuttings of honeysuckle in spring and summer. Choose stems with lots of leaf nodes and take cuttings of around 10cm – longer cuttings are likely to fail. Dip the base of the cutting in a rooting hormone, before planting it in potting compost.

Can honeysuckle grow in pots?

Honeysuckle can be grown in pots, although it will not grow in the same prolific way as in garden soil. The advantage of container growth is that you can move the plant around, and enjoy its fragrant scent in all areas. Choose a smaller variety that is suited to container growth, such as L. fragrantissima.

Make sure the container has good drainage and is deep enough to keep roots cool. Plant the honeysuckle in rich compost, and water the soil regularly. Remember that you will need to insert canes or a trellis to support your climbing plant.

Can I plant honeysuckle and clematis together?

There is no reason why you can’t plant honeysuckle and clematis together – these two climbers can work together to quickly (by gardening standards) cover a wall or trellis with foliage and flowers.

The plants require a similar growing environment, with moist, well-draining soil, and partial shade – although bear in mind that clematis thrives best when receiving at least 6 hours of full sun a day, which may be a little much for honeysuckle.

Another important consideration is that if they’re growing into each other, you may struggle come pruning time to identify which wood belongs to which plant. It may, therefore, be wiser to plant them alongside each other, rather than together.

The sweet-scented nectar of many honeysuckle flowers is very attractive to bees, and planting honeysuckle is a great way to encourage more of these important, struggling pollinators to visit your garden.

To further encourage bees, try to place your honeysuckle in a warm area with some direct sun, as this will make the scent of flowers stronger. Watch out for slight changes in the colour of your honeysuckle flowers, which will occur once they’ve been pollinated.

How do you grow honeysuckle on a trellis?

To grow honeysuckle on a trellis along a wall, you should position the trellis panels 5-10cm in front of the wall, to allow for better air circulation around the plant.

Dig a hole 50cm away from the wall (make it twice as wide but equal in depth to the pot your honeysuckle is in) and add some compost. Loosen the roots from the root ball of the plant, before placing it in the hole and refilling. Mulch the ground and water thoroughly.

Tie the honeysuckle shoots the bottom of your trellis in a fan shape. As the plant grows, use more plant ties to guide it in the right direction. Continue to do this, watering regularly, and watch as your honeysuckle starts to establish and cover the trellis (and your wall) with its dense green foliage.