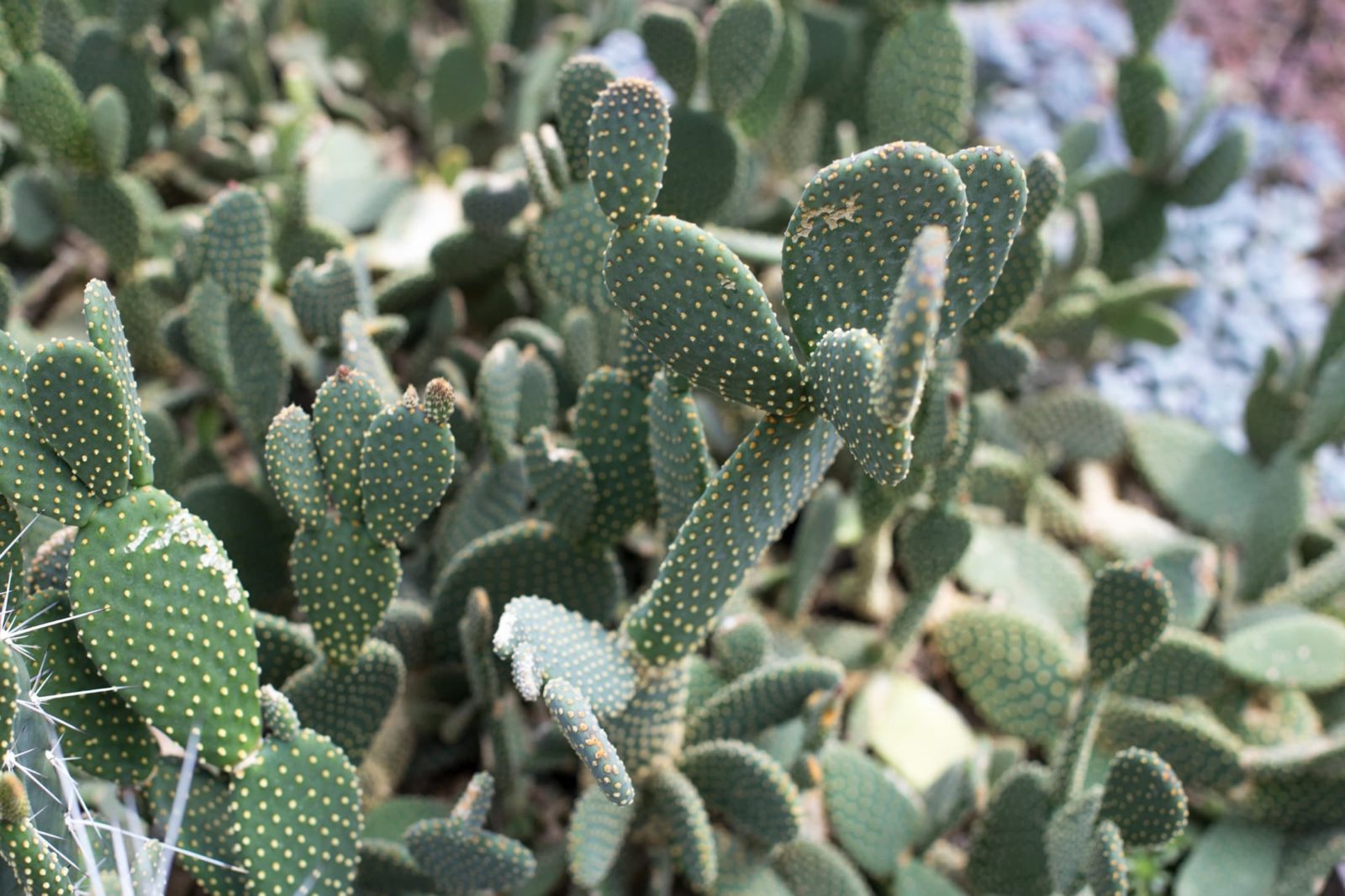 Compost vs Soil – What Is The Difference?

A prickly pear cactus can be an interesting houseplant to grow, and can also be a drought-tolerant container plant for a patio over the summer months.

There are many different prickly pear cacti which can be grown as houseplants or in a greenhouse under glass here in the UK.

Read on to learn more about these cacti and how to grow them so far outside their native ranges.

What is Prickly Pear Cactus?

Prickly pear cacti are plants in the Opuntia genus.

There are more than 200 different species within this genus, and a number of these can be grown as houseplants in the UK.

Opuntia can come in a wide range of different forms and sizes. Some grow no bigger than around 30cm in height, while others can eventually tower to over 5m in height.

They usually have flattened pad-like stem sections with spines and barbs, and when grown in optimal conditions, produce funnel-shaped flowers followed by fleshy, spiny and sometimes edible fruits.

With so many types of Prickly pear cactus to grow, we could not possibly cover them all in just one article.

So let’s take a look at three of the varieties most commonly grown as houseplants here in the UK:

This is the most commonly grown Opuntia here in the British Isles.

This small Opuntia grows to just 30-45cm tall, and has oval pads with tufts of small, golden spines.

Small yellow flowers can also form though these appear only very rarely.

An Opuntia is native to central and northern Mexico, this type of prickly pear derives its name from the Latin for ‘small and hairy’.

It has gained the RHS Award of Garden Merit.

This is the most common of the Opuntias cultivated for edible fruit.

It is grown for these fruits, and also for the prickly pads which are eaten as a vegetable known as ‘nopales’ – which is common in Mexican cuisine.

Unfortunately, the fruits are only produced when the growing conditions are absolutely perfect, and so you may not see them when growing the plant as a houseplant here. But if you do see them, they can be used to make syrups, jellies or jams.

However, if you grow a healthy edible prickly pear, you might consider carefully peeling, slicing and cooking young pads to add variety to your homegrown diet.

This vegetable is said to have a texture and flavour which resembles green beans.

Opuntia polyacantha is another option that can be grown indoors or in a greenhouse, and which can be placed outside over the summer months.

This is a spreading cactus which can ultimately grow over 2m in width and to a height of around 40cm.

The flattened pads are covered with areoles which have hairs and spines protruding from them.

In summer the plant will often yield magenta flowers which bloom on the end of the flat pads.

They are relatively easy to care for indoors, and can often be placed outside over the summer months.

Like other cacti, they do not have high water needs, and are relatively low maintenance.

Grow an edible type and you might also be able to achieve edible yields from your interesting houseplants too.

Where to Grow Prickly Pear Cactus

Prickly pear cactus will usually be grown as houseplants or greenhouse plants here in the UK.

Though they are relatively easy to care for, providing the right conditions where they are growing is crucial for the best results.

Prickly pear cacti must be grown in an environment in which temperatures do not fall below 10°C.

Ideally, the plant should receive temperatures in summer of at least 18°C. Remember, these are desert plants, which enjoy warmth.

While you can place these cacti outdoors in a sunny and sheltered spot in summer, you will certainly need to move them indoors or undercover for the winter months. Be sure to make this move in early autumn.

If growing indoors year-round, a prickly pear cactus should be moved to a cooler spot (10-13°C) in the winter to encourage flowering.

You should keep your prickly pear cactus away from direct heat sources such as radiators or stoves, and also away from draughts and fans which cause temperature fluctuations.

Prickly pear cacti should be grown in a bright spot that gets as much light as possible. However, you should shield it from strong, direct sunlight in the summer.

A south-facing or west-facing windowsill can be ideal, and the plants should get 4-6 hours of direct sunshine in the summer months.

When potting up a prickly pear cactus, choose a container which is the same size as, or only very slightly bigger than, the rootball.

Make sure that the pot allows for free-drainage and has a hole or holes at the base.

It is a good idea to use a terracotta pot for cacti and succulents as these will not retain moisture as much as plastic pots.

Like other desert cacti, it is important to use a very free-draining growing medium.

You can use a multipurpose compost with added John Innes with added extra grit.

Better yet, you can use a potting mix that has been specifically formulated for cacti and succulents.

Top dress the container with a layer of gravel, pebbles or a decorative cover.

While prickly pears are cacti and obviously, as desert plants, can cope with drought and dry conditions, do not make the mistake of thinking that they do not need to be watered at all.

Though these plants can survive long periods without much water, by storing the water in their stems, they will grow better and are more likely to flower (and fruit) when they are provided with adequate water supplies.

Between April and September, you should water moderately whenever the growing medium is dry. However, you should limit watering during the dormancy period, when the plant is not growing during autumn and winter.

Watering just once a month or so should be sufficient during this time.

It is very important to make sure that when you water, the water drains through freely. The cactus should never be allowed to sit with its roots in water. And make sure you do not leave water sitting below the base of the pot.

For best results, you should feed your prickly pear cactus with a specialist cactus fertiliser once every two months from spring through to early autumn.

But do not feed your plants over the autumn and winter months.

Once you have perfected the care of your prickly pear cactus, it is relatively easy for you to propagate your existing plant and expand your houseplant collection.

You can propagate Opuntia by seed, but by far the easiest way to propagate them is by taking cuttings.

Take care when handling your plants as of course the spines and prickles can do quite a lot of damage to your hands if you do not.

It is best to wear gloves and also to use tweezers or some tongs when taking cuttings.

To take cuttings from a prickly pear:

Keep an eye on the cutting and water whenever the compost feels dry, and your new cactus plant should have rooted within around 4 weeks.

Many of the issues you see with your prickly pear cactus as you care for it are likely to be related to the conditions in which you are growing it, or problems with watering.

You may also see scale insects or mealybugs. But you should be able to carefully wipe these away with water, or an organic insecticide if there is a larger infestation.

Just take care around the plant as the small spines can be difficult to remove from the skin.