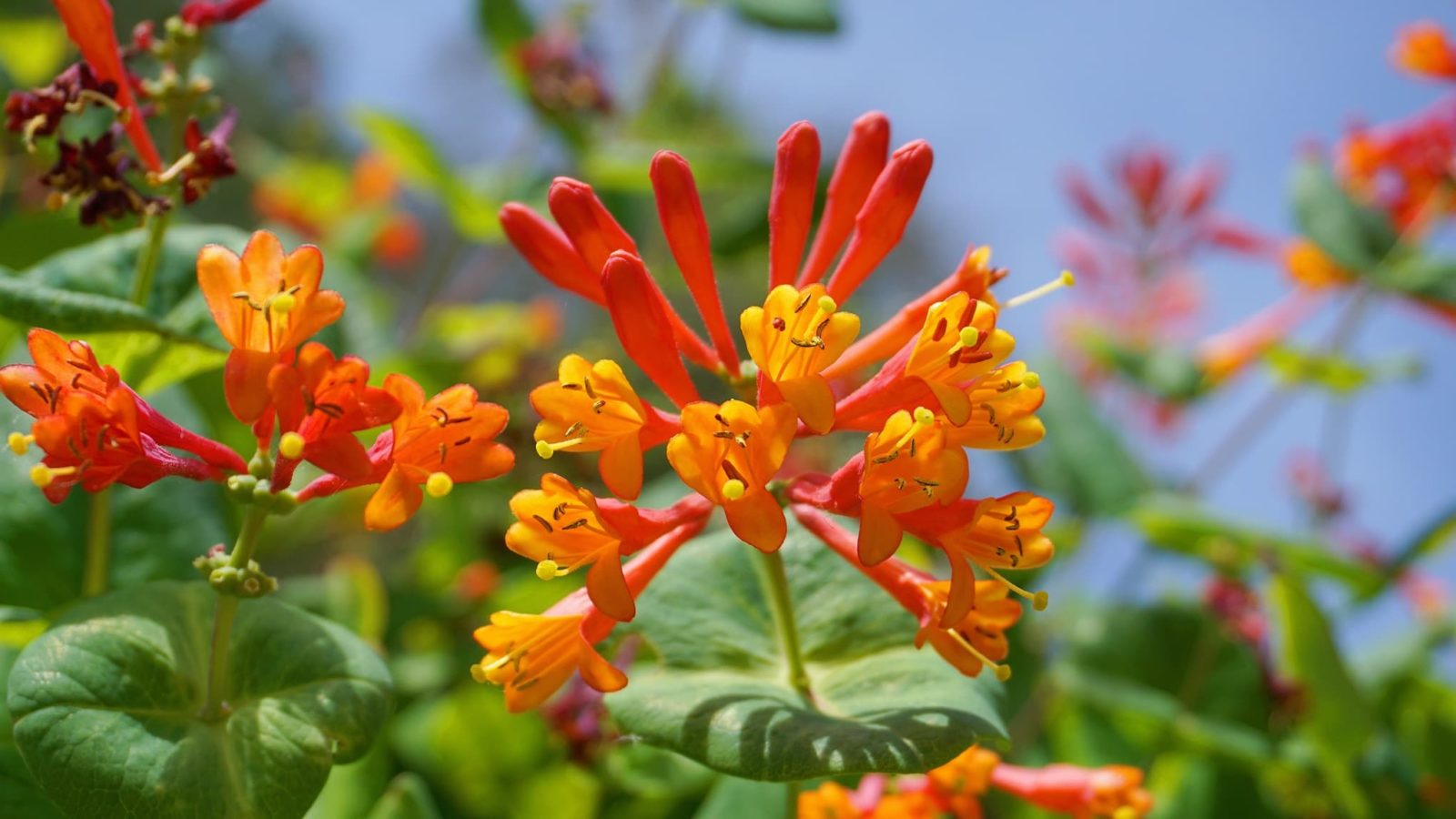 Maize vs Corn: What’s The Difference?

Honeysuckle is one of the easiest and most rewarding plants to grow, producing beautiful pollinator-friendly flowers, often with a heaven-sent smell that lingers in the air.

Though suited to growing direct in the ground, they are also well adapted to being grown in pots and containers, so can be grown almost anywhere.

For those growing in the ground, see our Honeysuckle plant care guide which will better serve your requirements. If growing in containers, please read on…

Honeysuckles are botanically named ‘Lonicera’ and are part of the Caprifoliaceae family, comprising approximately 180 different species of ornamental climbers and shrubs. [source]

Honeysuckles can be deciduous or evergreen, and typically flower in summer to autumn, but some can even flower in winter, providing a wonderful scent in the darkest months.

However, not all honeysuckles are scented, so it is well worth checking before growing yours.

Honeysuckles tend to grow best in full sun, however, some varieties can cope with partial shade.

The scent of climbing honeysuckle is most often more intense when grown in a sunny and warm spot, such as on a south or west-facing wall.

Honeysuckles are widely available in so many different guises and forms. From tall climbers to small shrubs, there is a perfect variety for every garden or balcony.

With so many to choose from, here are some great options when growing in pots:

It produces stunning scented flowers from April onwards into the summer, which start out white and slowly turn yellow.

Lonicera periclymenum ‘Graham Thomas’, or the common honeysuckle or woodbine, is a vigorous and scented deciduous climber that can grow to H4 – 8m x W1 -1.5m.

Reportedly hardy in all of the UK, it should be able to cope with the worst of any British winter.

Lonicera similis var delavayi, or Delavay honeysuckle is a hardy and semi-evergreen shrub that can sprawl to H4 – 8m x W1 -1.5m over time, but is often grown as a climber.

Lonicera fragrantissima, or winter honeysuckle is a semi-evergreen shrub that produces delightfully scented white flowers between December and March.

A small-leaved evergreen variety that can be small and compact and thus perfect for hedges or topiary.

It may be true that some honeysuckles don’t do as well in a pot when compared to being planted directly in the ground, but the majority will grow perfectly well.

The huge advantage of growing in a pot is that they can be grown on a terrace or balcony and can be moved around to find the best position.

With this in mind, in their native habitats, climbing honeysuckles tend to have their roots in the shade and their stems reaching for the sky.

Honeysuckles are best planted in spring, as the temperatures begin to rise and they have several months to establish before winter sets in.

To plant, half fill the pot or container with compost, place the plant in the pot at the same depth as previously planted and backfill around the plant, firming in gently.

Water well, top-up any receded soil as necessary and tie in any shoots to the supports.

When it comes to choosing a pot or container for a honeysuckle plant, it is usually a case of the bigger the better – ideally at least two or three times as big as its current pot.

This will allow for the roots to spread wide and deep and encourage the shrub or climber to grow well.

Honeysuckles will turn up their feet if subjected to waterlogged soil, so adequate drainage holes are a must so any excess water can freely drain away.

Using pot risers or feet may help any excess water drain away, as they lift the pot a few centimetres off the ground.

When growing honeysuckle in a pot or container it is important to use a free-draining, rich and good quality compost, such as John Innes no 3, which is recommended for shrubs and climbers.

If growing a large honeysuckle shrub or climber then support for the plant to grow upwards is generally required.

Supports are best installed at the time of planting so the new young shoots can be trained in.

Supports can include wooden trellis, bamboo canes or metal obelisks.

Even though some honeysuckles are self twinning, they will benefit from tying in, especially when first establishing themselves.

Most honeysuckles will grow best in moist, but free-draining soil and if grown in pots will require regular watering throughout the growing season.

Since the nutrients in the pot will need replacing over time, it is recommended to feed annually in spring with a general fertiliser and once again later in the growing season.

A good mulch of organic matter in the spring is a good idea as well, as it will help conserve moisture during the hotter months.

Honeysuckle pruning depends on the variety.

Lonicera japonica ‘Halliana’ for example falls into pruning group 11 and requires any congested stems to be thinned out and overgrown shoots reducing to just above a healthy bud join.

If the plant needs renovating, which it may do after several years, the plant can be cut down in spring to 60cm from ground level, from which it will grow again.

Lonicera Fragrantissima, on the other hand is specified as pruning group 2 and does not necessarily need pruning.

However, it can be trimmed to size immediately after flowering in April or May, but no later.

Honeysuckles are generally pest and disease-free – however, they can be susceptible to aphids.

Aphids or ‘greenfly’ as they are commonly known, are sap-sucking insects which often leave behind a sticky honeydew substance.

It is important to start checking honeysuckle plants for aphids from spring onwards, as if caught early control measures can be taken, before a larger infestation potentially causes damage.

Controls can include squishing by hand and encouraging aphids’ predators (including hoverflies, ladybirds and ground beetles) into the nearby area.

Organic sprays such as fatty acids and plant oils can prove effective or with severe infestations, contact insecticides may need to be used.

However, it is important not to spray plants when in flower as this presents a danger to pollinators.

Honeysuckles can be susceptible to powdery mildew, especially during the summer months.

Powdery mildew is caused by fungal spores and can sometimes indicate that the roots of the plant are dry.

Increasing air circulation can help prevent powdery mildew from developing, so make sure the plant is not overcrowded by other plants.

If your honeysuckle is affected by mildew it is important to collect and dispose of the affected fallen leaves and flowers, as this will help break the cycle of new spores developing in the following spring.

For severe cases, fungicides such as Tebuconazole and Triticonazole have been approved for the control of mildew on ornamental plants, but are only recommended as a last resort and after non-chemical controls have been tried.