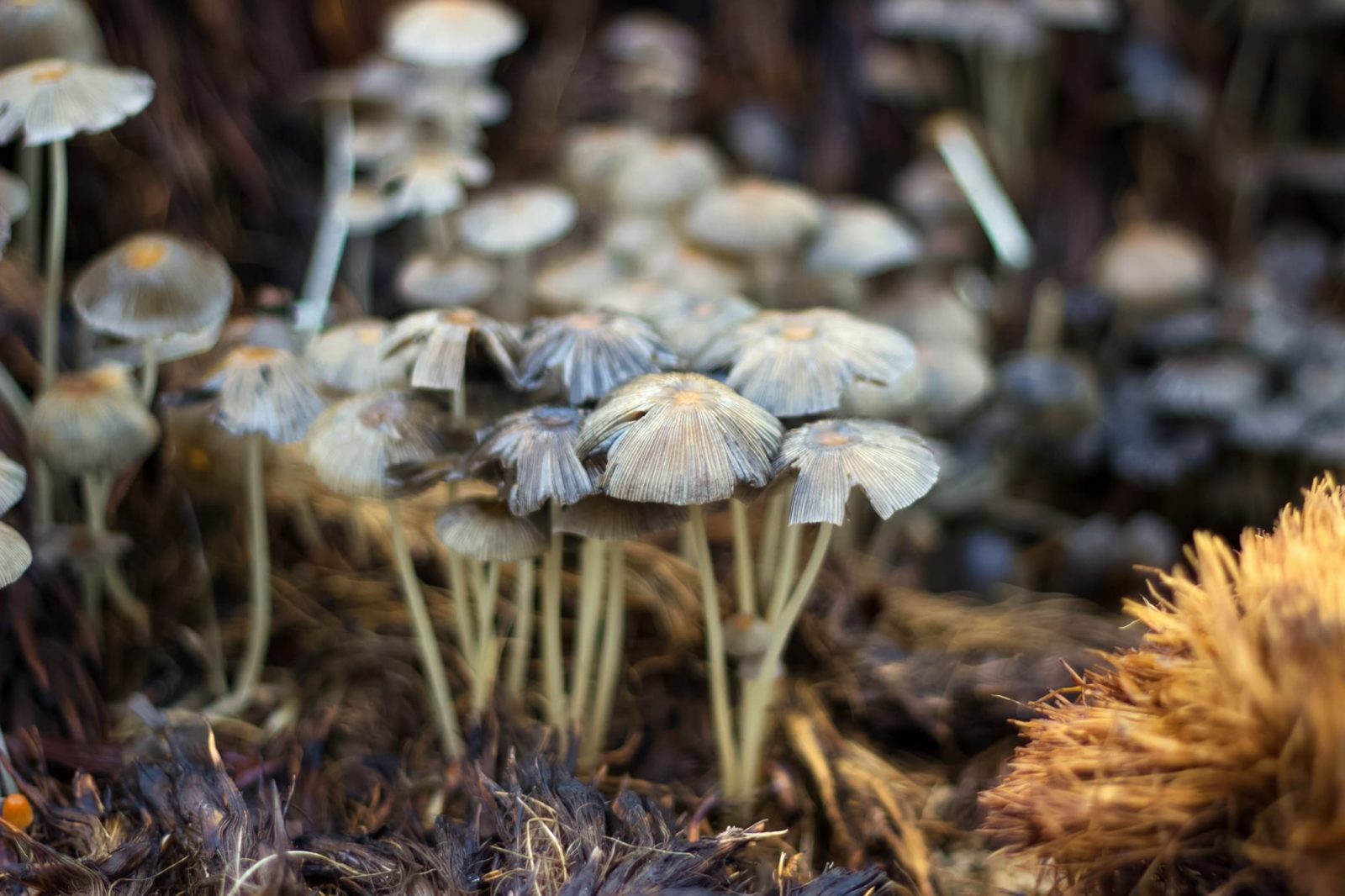 Mushroom compost is the compost used and generated during the process of growing mushrooms.

As well as being suitable for fungi, it also makes excellent organic compost for a variety of vegetables, fruits and flowers, and is perfect for plants which require a lot of water, as it retains moisture.

What Is Mushroom Compost?

Exact recipes differ between growers, but mushroom compost is usually based on an organic substance such as straw or hay, combined with gypsum and horse manure or poultry.

The mixture is placed in hot compost piles to process and pasteurised to remove weed seeds and microorganisms. It can then either be used as it is, or planted with mushroom spores.

If mushroom spawn is added, the mix will often then be topped with sphagnum moss to promote growth, and placed in a dark, moist growing environment.

After around 3 weeks, once the mushrooms have grown and been harvested, the excess fertiliser is sterilised, removed, and recycled into spent mushroom compost.

Spent mushroom compost can be used to enrich the soil of a wide variety of plants, acting as a light fertiliser that slowly reduces nutrients.

It has high water retention which significantly reduces the amount of soil watering required. It’s also a great way to improve the health of a lawn, and to break up dense clay soils.

Mushroom compost is an organic compost with a crumbly texture, a dark brown colour, and an earthy aroma.

As well as nitrogen, phosphate and potassium, the compost also contains calcium, magnesium and iron, important nutrients for many plants.

It’s ideal for mixing with soil to act as a light fertiliser, and to help retain moisture.

Commercially, mushroom substrate is usually made from a combination of straw, gypsum and horse manure.

Bales of straw are saturated with water and then run through a wood chipper to break it into small particles.

These particles are then mixed with gypsum and manure, and arranged in hot compost piles and watered, to begin the composting process.

After around 2 weeks, the piles are moved into rows and left to compost down for a further 2 weeks.

Following this, the compost is pasteurised, to sterilise it and remove any microorganisms and weed seeds.

This mushroom substrate is then ready to be planted with mushroom spores. Alternatively, it can be added as it is to soil, to greatly enrich the nutrient content.

If the mixture is used to grow mushrooms (as is more common), the compost will break down into a soil-like substance.

Once the mushrooms are grown, the mushroom production house is steam-treated to pasteurise and remove pests and bacteria. The waste compost is then bagged up to be sold as spent mushroom substrate.

Spent mushroom fertiliser which has been recycled from the mushroom farming industry is the type of mushroom compost usually found at garden centres.

It has a lower nutritional content than non-spent fertiliser, as the mushrooms have already consumed much of the nitrogen and other nutrients.

What Is Mushroom Compost Made Of?

Given the name, you’d be forgiven for thinking mushroom compost was made out of mushrooms.

In fact, it’s made up of whatever organic materials are going to be, or have already been, used as compost to grow mushrooms.

A recent study by the Pennsylvania State University found that mushroom compost has a 58% moisture content, showing that it also contains a high amount of water. [source]

As it’s sterilised during the composting process, the compost shouldn’t contain any bacteria, wheat seeds or weeds.

What Are Its Benefits?

Mushroom compost has a high ability to retain water, which means it improves the transmission of water through soil and helps to keep it moist.

This makes it a great addition to the soil of plants which require a lot of hydration, and helpful to gardeners who are unable to water their plants frequently.

Using mushroom compost can halve the amount of water needed to grow your plants.

On top of this, the fact that mushroom compost is a by-product from the mushroom growing industry, recycled into a new compost with no additional materials, further makes it an eco-friendly addition to your garden.

The straw base of most commercially-manufactured mushroom compost makes it suitable for breaking down dense clay soils over time.

This can improve the structure and drainage of such soil, and make it more suitable for growing plants.

Mushroom compost also contains a limited amount of nitrogen, which is essential for plants and foliage growth.

As the mushrooms have already consumed many of the nutrients, mushroom compost acts as a light fertiliser that will gradually enrich the soil, without being so nutrient-dense that it encourages weeds to thrive.

Can You Plant In Mushroom Compost?

Mushroom compost is not a soil replacement, and you should not attempt to plant seeds in it alone.

Its high salt content can be bad for some plants, whilst it’s water retaining qualities can cause waterlogged soil, which can lead to fungal infections and rotting.

You can, however, plant in mushroom compost that has been pre-mixed with soil.

Mixing mushroom compost with soil at a ratio of 1:3 in your container prior to planting will dilute the salt content and provide a slow-release fertilising effect.

You can plant seeds or plants into the mixture, and expect them to benefit from a gradual supply of nutrients.

What Plants Is Mushroom Compost Good For?

Unsurprisingly, mushroom compost is most useful for growing mushrooms; this is, after all, the purpose for which it is designed.

However, it can also be beneficial when added to the soil of a variety of potted plants, fruits and vegetables, where it works as a light fertiliser, adding organic matter to the soil and encouraging growth.

The high amount of calcium in mushroom compost is particularly helpful for plants such as tomatoes, which can suffer blossom-end rot as a result of calcium deficiency.

Mushroom compost’s high ability to retain water also makes it great for plants that require a lot of hydration, such as hibiscus and other tropical plants.

We recommend incorporating mushroom compost into your soil before laying new turf or planting grass seeds.

Once grown, adding a layer of mushroom compost to the top of your lawn can help to improve its appearance, as the limited nutrients will slowly permeate down through the soil and feed your grass, without encouraging weed growth.

It can also be used as an effective mulch, when fresh, for the same reason.

When To Avoid It

One of the most beneficial qualities of mushroom compost – high water retention – can also be the most problematic in certain situations.

You should avoid using mushroom compost for plants that don’t like a lot of water or require good drainage, such as succulents.

Similarly, don’t use mushroom compost in potted plants that don’t have drainage.

The sterilisation of most mushroom compost before sale means it won’t contain any beneficial microorganisms, and should therefore be avoided if you’re looking for a compost that will help protect your plants from disease.

You can restore microorganisms by mixing mushroom compost with another compost prior to use.

Mushroom compost often has a high amount of soluble salts, and although the salt concentration is reduced when it’s mixed with soil, it still should not be used with germinating seeds or young seedlings.

Some plants, such as azaleas, camellias and blueberries, are particularly sensitive to salt, and adding mushroom compost to their soil could be harmful.

Although mushroom compost generally has a neutral pH, if it’s been made using chalk, it’s possible for it to have a high alkaline content, which would make it unsuitable for plants that favour acidic soil.

How To Make Mushroom Compost

To make your own mushroom compost at home, you first need to decide what organic fertiliser you’re going to use.

If using straw, and only requiring a small amount of compost, you can follow the below process:

To make mushroom compost on a larger scale, similar to how it is commercially manufactured, you can use a compost heap.

Where to Buy Mushroom Compost

If you don’t want to make your own, you can purchase mushroom compost in bags from garden centres and landscape suppliers.

If you need a greater amount, it’s also possible to buy it by the truckload.

Can I use mushroom compost for my house plants?

Yes, you can add a very small amount of mushroom compost to the soil of your potted house plants.

You should only do this if they have good drainage, as the mushroom compost will cause water retention, which can make the soil waterlogged.

How do I add mushroom compost to my soil?

To add mushroom compost to your soil, spread a layer of at least 5cm thick on the surface, and mix it into the top 20cm of soil. Leave for 1 week to allow the compost and soil to combine, then sow your seeds, water the soil and leave to grow.

Will there be mushrooms in my compost?

The mushroom compost should have been sterilised prior to you purchasing it, removing any spores still present.

If you notice mushrooms growing after laying your compost, make sure to remove them to prevent them from spreading throughout your garden.

Again, as the mushroom compost is pasteurised before leaving the mushroom house, there shouldn’t be any weeds in your compost.

This is providing it has been stored correctly and not come into contact with any airborne weed seeds or contaminants.

To try to ensure this, purchase a quality mushroom compost from a reputable garden centre.

It makes an excellent bedding material in a vermicomposter, and will lead to a rich compost full of helpful microorganisms.