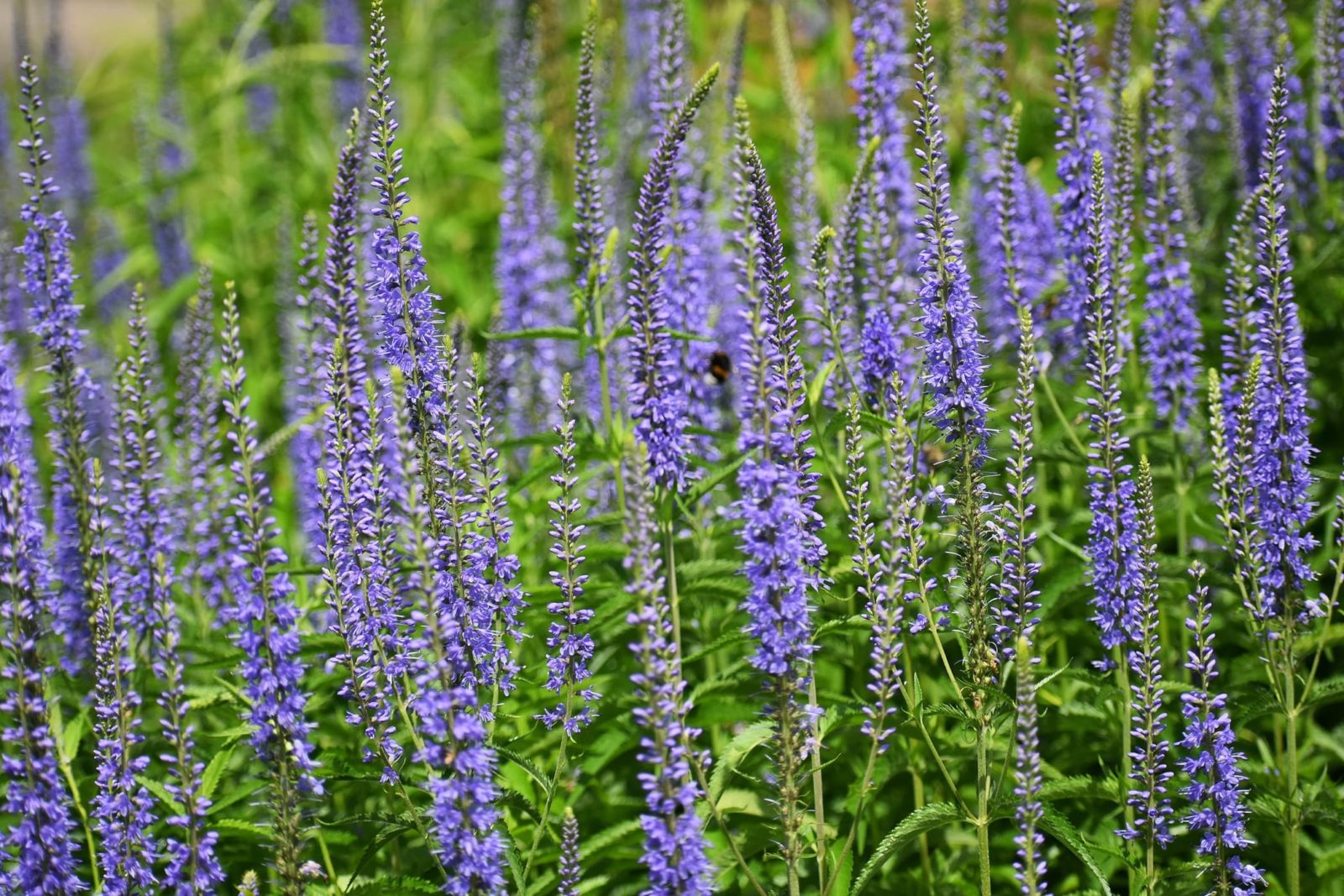 Garden speedwell is a popular perennial, which can be a good choice for many UK gardens.

In this article, we will take a look at this garden plant in a little more depth. We’ll discuss why it might be a good choice for your garden, which varieties you might like to consider, how to sow and plant it, where and what with.

We’ll also explore how you can successfully care for this plant if you do decide that it is the right choice for you.

What is ‘Garden Speedwell’ Veronica longifolia?

There are many different Veronica species which can be great additions to UK gardens.

Veronicas are within the Plantaginaceae plant family, and cultivars within this species – commonly referred to as garden speedwell, or long-leaved speedwell – are among the best.

These are upright herbaceous perennials, growing up to around 1m tall, which have long flower spikes, usually with purple or lilac hues, though white and pink cultivars are also available.

It is one of around 500 different species within this varied genus, which also includes many other plants with the term ‘speedwell’ in their common names.

Veronicas for gardens are generally divided into three main groups: Veronica longifolia belongs to the first of these three groups: herbaceous perennials.

These plants are long-lived and die back each autumn before returning with new growth in the spring.

There are also dwarf Veronicas, commonly referred to as alpines, which are great for rock gardens, and Veronicas best for boggy or waterlogged conditions, or shallow waters.

Why Grow Veronica longifolia in Your Garden?

Garden speedwell is well known as an excellent wildlife-friendly plant for gardens.

It attracts and benefits bees, butterflies, other pollinators, and beneficial insects which help keep pest numbers down. So this can be a great plant for those who wish to garden in an organic and eco-friendly way.

This plant can be useful in companion planting, especially in perennial schemes and in fruit tree guilds. And it can look wonderful over a long period.

It will typically bloom right through the summer months and often well into the autumn. You can expect beautiful blooms to attract pollinators and other beneficial insects from June right through to October.

Fortunately, for those who have kids, pets or garden livestock, this plant has no reported toxicity. This makes this a safe plant for many settings.

Veronica longifolia is a great low maintenance plant, which is relatively easy to grow and which will quickly spread to fill available space in the right setting, filling in beds or borders.

Some named varieties of Veronica longifolia to consider include:

Other Veronicas, such as Veronica spicata, Veronica gentianoides and Veronica austriaca can also be popular with UK gardeners, and some Veronicas like germander speedwell are common ‘weeds’ in lawns.

Where to Grow Veronica longifolia

It is a hardy (H4) plant throughout the UK. It will thrive in most soil types as long as they are moist, or moist yet free-draining, and can cope with most pH levels.

This is a plant that will often look great in the middle or towards the back of a border with other perennial plants which like similar growing conditions.

It can be grown somewhere sheltered or exposed but as a tall plant, it may need staking in more exposed locations.

Veronica longifolia is fairly easy to grow from seed.

Seeds can be sown from March to May, or from September to November in a cold frame or with some protection.

Once seedlings are large enough to handle, they can be potted into individual pots, to be planted out in spring or late summer/ early autumn if spring sown, and in late spring if sown in autumn.

Whether sowing from seed, planting divisions from existing plants, or plants purchased from a garden centre or plant nursery, Veronica longifolia is planted out between June and September into its permanent growing positions.

Spring and early autumn are generally the best times to plant for the most successful establishment.

Veronica longifolia should typically be spaced at around 50-60cm apart, depending on the specific cultivar which is being grown.

Veronica longifolia is a plant that, as mentioned above, will benefit many plants growing close by due to its ability to attract a range of beneficial insects to your garden.

Over its long blooming period, it can protect fruit trees or other perennial plantings from aphids by attracting species which prey on them. It will also bring pollinators to food-producing spaces.

In ornamental schemes, Veronica longifolia works well alongside many other perennial flowering plants such as:

Veronica longifolia, as mentioned above, is a great choice for a relatively low maintenance perennial planting scheme.

If placed in a suitable spot, these herbaceous perennials will look great for many years to come, bringing benefits to you, and the wildlife which shares your space.

Veronica longifolia should definitely be watered during establishment, but once established, rainfall should generally be sufficient.

Watering will generally only be required during prolonged periods of drought.

As long as a mulch of organic matter is added around perennial plantings, there should be little need for additional feeding in most circumstances.

Veronica longifolia is not a plant which is typically prone to pest problems. In fact, as mentioned above, it can aid in pest control in an organic garden by drawing in predatory species.

However, Veronicas can sometimes be prone to fungal issues like downy mildew, powdery mildew and leaf spot.

Making sure that there is good airflow around plants, ensuring adequate moisture but not letting waterlogging occur,  not letting the area dry out entirely, and keeping good biodiversity in growing areas can help reduce their incidence and spread.

Remove any affected materials as soon as you see signs of such problems to prevent their spread.

Deadhead regularly throughout the blooming period for repeat blooms.

Faded flowers on Veronica longifolia can be cut back after they have flowered in the autumn if neatness is desired.

However, leaving dying stems in place over winter can provide habitat for wildlife like ladybirds to overwinter.

Mature clumps of Veronica longifolia should be divided every few years in March or April, or in September/October.

This can rejuvenate the existing plant and allow you to propagate new plants for your garden.

As you can see from the above, Veronica longifolia can be a high value and low-effort plant to introduce if you have suitable conditions in your garden.