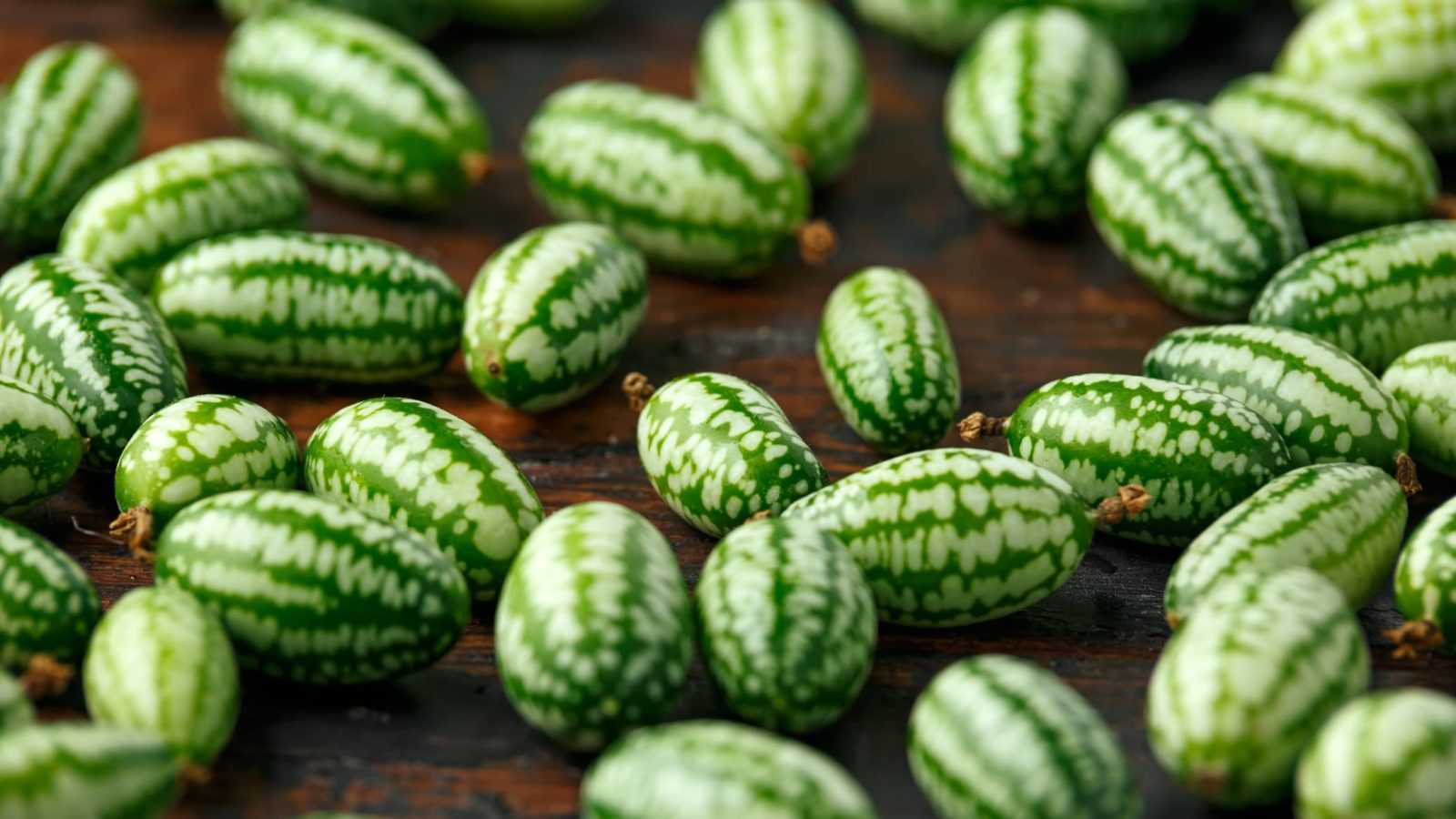 How To Get Rid Of An Ants’ Nest In Your Garden

Though rising sharply in recognition, Central American Cucamelon is still an exotic rarity in the United Kingdom.

Somewhat cucumber-like and citrusy, they are crunchy and zesty raw, and impart a tangy taste to salads and salsas. What’s more, the whole package provides very ornamental ‘wall cover.’

This fruiting vine is a head-turner – for sure, in the ranks of garden exotica, Central American Cucamelon is way up there.

As the fruit resembles a doll’s house melon in appearance while being similar to cucumbers in taste, one might infer that Cucamelon is a cross between the two. Well, surprise! – it is neither melon nor cucumber.

However, Genus Melothria does fall under Family Cucurbitaceae which includes both cucumbers and melons. So maybe there’s something there!

And all four alternate names are accurate with the first two describing this wonderful fruit from gustatory impressions and the second two from a visual standpoint.

The only thing one may add is that the flavour not only has a touch of lime-like sourness but also a pleasing tang. The mouthfeel is succulent and crunchy.

The fruit displays pale green bands or dapples on a mid-green ground and is about the shape and size of a large purple grape but can be up to four centimetres long (though it should be picked young).

The flowers, at only about four millimetres, are nothing spectacular but are cheery in their own right. They are flat with five splayed petals and of a bright, buttery yellow.

The leaves too are quite small at four to seven centimetres long. They have three to four lobes with a broadly toothed or wavy margin. They are roughly heart-shaped and are etched with veins.

Melothria scabra is monoecious which means that the flowers (on the same plant) are either male or female. The male and female flowers of a monoecious plant pollinate amongst themselves.

Among Cucamelon’s noteworthy attributes are that it is among the most pest-resistant and disease-free of vines, is fairly drought-resistant, and is very productive, even prolific.

Though European botanists ‘discovered’ this plant in the 1860s, they have been domesticated in Central America for centuries, reputedly since Aztec times.

It was scientifically named and described in 1866 by Charles Victor Naudin, a pioneering naturalist and botanist from France.

Next to nothing is known about the evolution of Melothria scabra but for the interesting titbit that its closest relatives in its genus are found, not only in the Americas, but, in tropical western Africa!

Melothria scabra is an unique heirloom plant, and it has no varieties!

‘Sandita’ grows in nature in a swath of land from Mexico down to Venezuela including most, though not all, regions of Central America. In its native range it thrives in hot weather with temperatures hovering between 30 and 35° centigrade.

In its own habitat Cucamelon is a deciduous perennial though in British climes it is usually treated as an annual and that’s because it is frost-tender, hardy only to Zone H1C.

That doesn’t mean you have to grow it as an annual; this vine can carefully be stored in dormant state for the winter and re-planted in spring.

Where to Plant Cucamelon

As a bona fide two-for-one deal, Cucamelon climber not only serves up tasty treats, it also delivers ornamental bang-for-buck to the garden.

While this Central American native must be grown in a sheltered location where it enjoys full sun, its ‘garden status’ as an interesting ornamental suggests that it should be in a position where it can see and be seen.

Though the straightforward and practical thing to do is to have this climbing vine run up a trellis or tomato cage, to take advantage of its decorative value grow it against the latticework of a summer house, or climbing up a shed or even a wall of your house.

You could twine it around the post of a pergola. However, keep in mind that if it is tightly coiled around any upright, removing this delicate vine in late autumn for dormant storage will be very difficult; in such a case Cucamelon will have to be treated as an annual.

Though harvesting and maintenance would be difficult, you could grow these vines in hanging baskets so that they cascade over and down the rim for another type of aesthetic appeal.

How to Grow Cucamelon

Cucamelon needs to be started indoors in the UK.

About four weeks before the last predicted frost date for your location is the ideal time. Seeds should be sown in potting mix (which would include compost) in pots.

Consider using biodegradable pots to make transplanting easy and risk-free as young Cucamelon roots are tender, and disturbance or damage may affect the growth and yield of the vine, or even kill it.

Push seeds all the way into the soil with the pointed end facing up, one per pot.

You’ll need to grow several of these vines to produce attractive ornamental cover and to yield a good harvest so plan on starting at least six, preferably a dozen, seedlings keeping in mind that you will likely lose a few.

Germinate, and grow the seedlings indoors or in a greenhouse such that they get full sun and at a soil temperature of around 23° to 24° centigrade.

Be prepared to water patiently for two to three weeks while the seeds germinate.

Optimal soil temperature will markedly speed up germination. As the seedlings grow, reduce the temperature to 20° to 21°.

After there is no chance of frost it is time to transplant the vines outdoors. However, in the UK it would be prudent to harden them for a week to ten days before transplanting.

If you grew your Cucamelons in biodegradable pots the job will be much easier and free of both any stress or risk. Space the growing vines 20 to 30 centimetres apart.

If you want to grow Cucamelon in regions of the United Kingdom where the weather is particularly cold or unpredictable, consider doing so in a planter big enough for a vine plus a support framework.

This will give you the flexibility to shift the plant as the vagaries of the weather may dictate.

The soil should be a fertile loam primarily comprising of chalk and sand, amended with some compost or organic manure. It should drain very well.

Though a soil pH from Moderately Acidic to Slightly Alkaline will do just fine, the ideal soil pH for Cucamelon is Slightly Acidic. The location in the garden should enjoy full sun but should also be sheltered from the wind.

About ten days after transplanting you may fertilise the climber with a 5-10-10 vegetable fertiliser, especially if the soil is not very fertile. However, do not fertilise these sensitive vines as you would tomatoes or melons; apply fertiliser lightly and sparingly.

Water the vines moderately twice a week such that the soil stays moist but not wet. Water at soil level, not on the foliage. A drip system will be very suitable for this plant.

Mulching around the vines, though not necessary, will be helpful. It will deter weeds and also retain moisture.

Cucamelon need a support structure on which they can climb otherwise they will spread and creep untidily along the ground, with the attendant risk of slugs and rodents having an easy time with your fruit, and the fruit getting dirty or contaminated as well.

After the vine has ceased to bear fruit by late autumn, you can preserve your plant to flower again next spring.

Gently disentwine the climber from the support structure, and remove it from the soil taking care not to damage the main fleshy root.

Keep the root system in only slightly moist compost and store for the winter in an above-ground room such as a shed that will be protected from frost.

In mid-spring, plant the vine outdoors again. Fertilise it a week or ten days after planting it out.

Cucamelon vines will produce fruit from mid-summer to mid-autumn. Fruits form at the base of the female flowers.

Timing is important in picking these fruits so that they’re at their best.

Cucamelon must be harvested early, as soon as it is ready.

Sure, you don’t want to pick these fruits when they’re pea-sized but you don’t want to delay either, otherwise they lose that light, refreshing, and succulent mouthfeel and become tough or dense and unenjoyable, and also develop large seeds.

So how do you know just when to pick Cucamelons? The fruit will form just below the flower, which will wither as the fruit develops.

The fruit is ready for picking when it is right around an inch long and firm – neither hard nor soft – and there is no more flower.

Guideline aside, it’s really not a great mystery – a little experimentation and you’ll have it down pat within days. What you do need to do without fail is that after the flowers appear, monitor the vines for pickable fruit every other day or even on a daily basis.

Snip off the fruits with a pair of secateurs; avoid trying to pull them off as the vines are delicate. Harvesting will go very smoothly if you have those secateurs in one hand and a bowl in the other.

You can store Cucamelons in the fridge’s crisper but for no more than three or four days.

Cucamelon vine is well known to be pest-resistant and disease-free.

On occasion, a vine may get powdery mildew or aphids.

Powdery mildew can be avoided by watering at soil level and ensuring that the plant is not closed-in by trees, other plants, or structures so that it can enjoy good air circulation.

Though aphids only infrequently attack Cucamelon, they are among the most dangerous of pests as they are hard to control because of how very rapidly they breed.

A one-percent solution of Orthene is normally the ‘go to’ remedy to eliminate aphids quickly but because Cucamelon is an edible vine you will want to use organic methods.

You can either get and release ladybugs and lacewings at the site of the infestation or clean it and spray it with Safer’s insecticidal soap, which is an organic product.

Do not attempt both methods in conjunction because Safer’s soap will put off ladybugs and lacewings.

Where to Get Cucamelon

The popularity of Cucamelon is on the rise but it is certainly not a plant that you can walk into your neighbourhood nursery and expect to find.

Nurseries that sell potted plants or bare-root vines are still few and far between. However, you will surely find some if you search online.

The best option is to buy Cucamelon seeds. These are much more readily available, both at brick-and-mortar garden centres and also online.

Though Cucamelon vines take their own sweet time to germinate, they are not particularly difficult to grow and care for, so seeds are really the way to go.