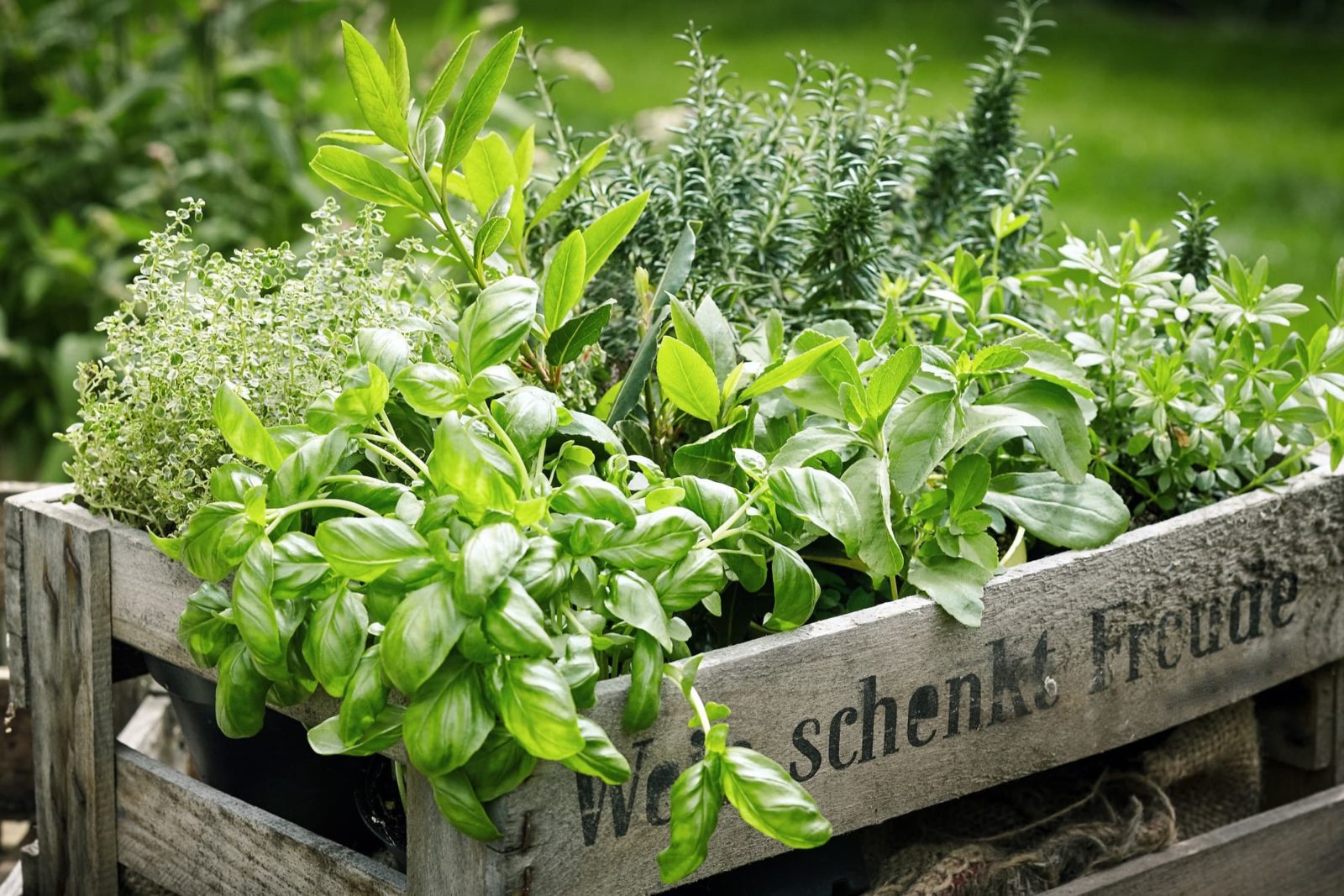 This alphabetical bunch of herbs is good for the cooking pot, while a thriving herb garden is a welcome addition to any home.

Not only does it add a generous dollop of greenery and gusto to an outdoor (or indoor) display, but it also produces intoxicating aromas that will compete with and complement one another.

This A to Z list is a fairly comprehensive round-up of all the major varieties that you can grow in the UK.

So without wasting any more thyme (sorry), here is some sage advice (and again!) regarding the herbs you might wish to include in your own garden this year.

A member of the rose family, agrimony is a deciduous herb which grows up to half a metre in height and offers bright yellow blossoms in summertime.

Technically a succulent, aloe vera is most commonly known for its rosette-shaped leaves.

It’s also very low-maintenance, making it great for beginners – your biggest issue may be overwatering.

Characterised by towering stems topped by oversized domes of flowerheads, angelica is great for adding architectural intrigue to the rear of your herb garden.

Its stems are most commonly candied for confectionary purposes. [source]

Anise hyssop, sometimes known as Agastache, is another tall perennial herb which carries spires of bright flowers which attract bees.

Its most notable feature, however, is undoubtedly the liquorice aroma it exudes and the liquorice flavour with which it can imbue baked goods and culinary dishes. [source]

This fragrant herb is synonymous with Italian cooking and is popularly used to make pesto, flavour salad or add some zing to your cooking. [source]

It is easy to grow here in the UK on a kitchen windowsill and supermarket-bought plants can survive a long time if watered from the bottom.

Sometimes referred to as sweet bay, bay plants can serve as the centrepiece of your herb garden due to their larger size and ornamental properties.

The leaves, when dried, are great for adding richness to the flavours of stocks, soups and stews. [source]

The bright blue blossoms of borage plants make them an attractive addition to any garden in their own right and are so eye-catching that they’re often used as a garnish for cocktails and other drinks. [source]

The leaves, meanwhile, give off a cucumber-like coolness which serve as a great addition to salads and dressings.

Part of the sunflower family, calendulas are distinctive for their bright orange and yellow blossoms.

These are entirely edible and are often used to add colour to potato or rice dishes, as well as bringing a slightly peppery zing to salads and soups. [source]

Sometimes mistaken for a weed, carum carvi is cultivated primarily for its seeds.

With a slightly aniseed flavour, these are often added to breads, sauces, pickles and sauerkrauts, while the roots can also be boiled and consumed as well. [source]

The daisy-like blooms of this plant are a tell-tale sign that you’ve picked the right type for culinary use, since non-flowering varieties are better suited to creating a scented lawn than a hot tea or infused sauce. [source]

Highly fragrant, it should only be used in small amounts.

This biennial herb is grown mostly for its aromatic leaves, which when used appropriately in salads, potato or egg dishes, give off a mild aniseed flavour. [source]

Although it’s the leaves which take most of the limelight, the pink blossoms which top chive plants are a sight to behold and an edible addition to your plate, as well.

The delicately hanging foliage of a comfrey plant make it a pleasing addition to a herb garden, but it’s more famous for its use as a natural fertiliser.

It can be grown and processed into comfrey tea, an organic liquid fertiliser that can be used across your garden.

Coriander commands something of a love-it-or-hate-it reputation in culinary circles.

A native of the East, it’s often used in Asian cuisine and both the seeds and the leaves are edible but individual in their properties. [source]

The former add a lemony zest, while the latter imbue a slightly bitter, acrid flavour to the dishes to which they are added.

This large herb carries sprays of yellow flowers and strong-tasting ferny leaves that are a common addition to salads, soups or flavoured rice.

The leaves can be used fresh, dried or frozen, while the seeds are often an ingredient in curry powders. [source]

Found all over the UK, elderflower is as unfussy as it gets when it comes to growing conditions.

Although the fruit steals most of the headlines, its flowers are also worthy of a mention given their ability to infuse cordials, syrups, teas, wines and champagnes with an exquisite taste. [source]

Like dill, fennel plants are characterised by sprigs of bright yellow blooms in the summertime.

All parts of the plant are edible and bring a faint aniseed flavour to the salads or other dishes to which they are added.

The dainty leaves and delicate white blossoms of fenugreek are pretty enough in their own right, but the seeds are the main attraction from a culinary perspective.

It can add a maple syrup-style sweetness to certain dishes. [source]

It’s not one of the most widely used herbs for nothing!

Garlic is great for adding flavour to all kinds of dishes, while the plant is easy enough to cultivate, as well.

Trim back green leaves to use in salads, pesto or as a garnish, but wait until they turn yellow to dig up the bulbs underground.

Due to its exotic origins, ginger doesn’t take kindly to frosts, so plant it in the early spring and take care to pamper it as best you can.

Do so, though, and you’ll be rewarded with delicious rhizomes that add a fiery kick and a frisson of flavour to curries and stir-fries.

A native of China, this ancient tree has made a successful transition to UK climes and offers an attractive option with delicately shaped leaves that won’t throw heavy shade.

It will grow to a large size, though, so it’s not ideal for smaller gardens. [source]

Ginseng also hails from the Far East, though it enjoys a more uneasy relationship with the British seasons and will appreciate being grown indoors.

Don’t be fooled by the beautiful white flowers and innocuous-looking leaves – the roots of horseradish plants carry quite a punch.

Normally grated into coleslaw or used in sauces to accompany roast beef, horseradish is an intense ingredient, while the plant itself is also very fast-spreading, meaning it’s best contained in pots.

Another stalwart of Asian (and particularly Thai) cuisine, lemongrass is grown for the fragrant base of its edible stems. [source]

It’s not keen on frosts either, so it’s a good idea to cultivate it in a container that can be easily moved indoors during the colder months.

Also known as flax, linseed is a popular alternative to rapeseed for producing oils. [source]

Use neutral, well-drained but moisture-retentive soil for the best results when growing.

Lovage has so many strings to its bow.

Fresh leaves are a great herbal addition to salads, soups and stews, while dried ones make a delicious tea. [source]

Its stems can be candied like angelica, its shoots can be blanched and its roots eaten cooked or raw. What’s not to love?

A member of the borage family, lungwort is closely aligned with borage and comfrey, among others.

It has interesting, variegated leaves and lilac coloured flowers that bloom from spring into summer.

Marjoram is often confused with oregano, and although the two are similar in appearance, they’re used differently in the kitchen.

Whereas oregano leaves are generally dried, marjoram foliage and flowers are more commonly used fresh as a late addition to stuffings, soups and sauces. [source]

As mentioned above, the strong-tasting (and stronger smelling!) leaves of oregano are generally dried before use.

They work particularly well when combined with ingredients such as garlic, onions and chili, though they’re versatile enough to be put to a variety of different applications.

While the former does look more attractive as a garnish, it’s the latter that carries the stronger flavours and forms a crucial ingredient of many dishes and dips, including tabouleh and salsa verde. [source]

First grown as a hybrid between spearmint and watermint, peppermint has come into its own over the last few centuries.

With evergreen foliage that can brighten up your herb garden during winter and flowers which will delight pollinators in summer, rosemary is an aesthetically strong choice for an outdoor display.

It also releases an intoxicating fragrance and, when picked, dried and added to dishes like roast lamb, makes an excellent culinary herb, too. [source]

There are hundreds of different varieties of sage to choose from, all of which will add cosmetic value to an ornamental border.

Maximise their flavour by picking them in the morning, when the leaves are moist and hydrated.

Sorrel is a leafy green which serves as an ideal alternative to spinach.

When picked young, its leaves will bring a zesty zing to salads and other dishes, while mature foliage will reduce significantly when sauteed, boiled or roasted, so be sure to give yourself a generous serving. [source]

St John’s wort is capable of propagating so rapidly that it’s considered a weed by some.

In fact, it’s so commonplace around the world that it’s not even known where it originated in the first place! [source]

The button-like blooms of tansy, with their distinctive yellow colouring and bobbing structure, are what first draws the eye of this aromatic plant.

There are two varieties of tarragon: French and Russian.

The former is favoured by cooking enthusiasts due to its more robust flavour. [source]

It is, however, trickier to cultivate and bring to flower, so it’s usually more convenient to seek a cutting than to grow from seed.

With a reported 300 varieties to choose from, gardeners are spoiled for choice when it comes to incorporating thyme into their herb display – especially since many of those have vibrant blossoms in summer. [source]

It’s a great addition to soups and stuffing mixes.

Turmeric is great for adding colour and flavour to rich, savoury dishes like curries, soups and stews. [source]

However, it’s used to southeast Asian climes, which means it won’t tolerate any drop in temperatures below -10°C.

For that reason, it’s best to cultivate it indoors, use a south-facing window or heat lamps to keep its sun exposure up and water regularly.

Capable of growing up to 1.5m in height, valerian is another strong choice for the rear of a flower bed or herb garden.

Its pink or white clusters of flowers are a sight for sore eyes come summertime, while its fragrance is often captured for use in perfumes. [source]

Although wild forms of yarrow are considered an invasive pest, cultivated yarrow can add structure, texture and colour to a garden display.