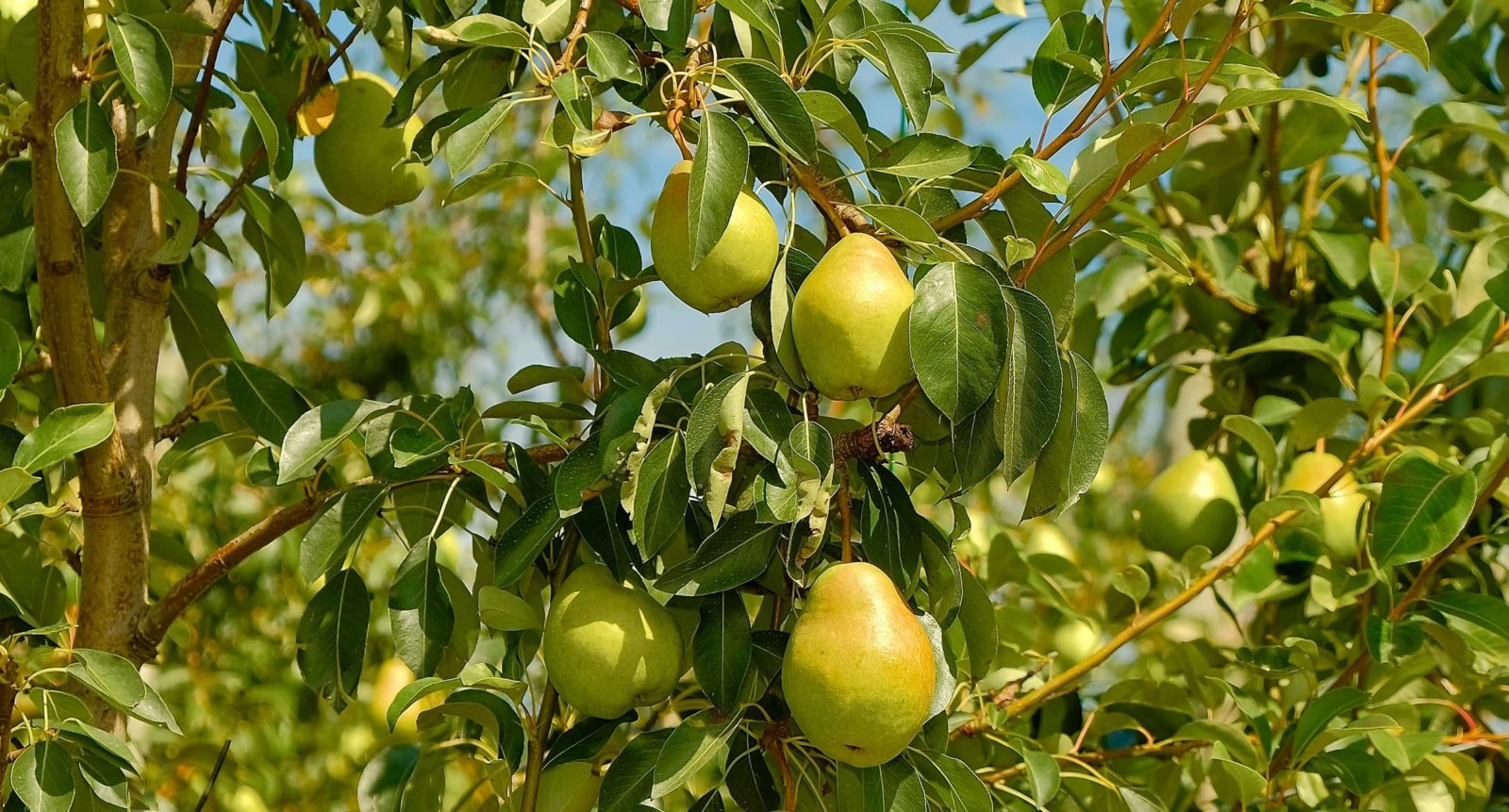 Adding a pear tree or two to your garden could be an excellent choice, so here’s what you need to know to grow these trees successfully here in the UK.

If you love to eat pears, you might be able to grow your very own supply of these fruits in your garden.

Pear trees are native to coastal and mild temperate areas in Europe, North Africa and Asia.

These trees are in the Pyrus genus, which is in the Rosaceae plant family along with roses, and many species of edible fruit.

Around 3,000 varieties of pear are grown and eaten around the world.

The pear is a pome fruit, like the apple and the quince for example. These fruits have been cultivated as food since prehistoric times, and are still very popular today.

The most important species of Pyrus used for orchard and garden cultivars in Europe, North America and Australia is Pyrus communis – the European pear.

Though pear trees are not quite as hardy as apples, they can be grown across much of the UK, and in fact, need some winter chilling to produce fruit.

Of the various cultivars of pear trees grown in the UK, some of the options to consider are:

When choosing a pear tree it should be noted that some of the above will be suitable for northern England and Scotland, while other varietals will really only thrive in the south.

It is a good idea to consider heritage varieties from your particular area.

Remember, too, that yields will usually be better if you plant two cultivars from the same flowering period (pollination group) or ones that have an overlapping flowering period.

Some pears are also poor pollinators and so two additional trees will usually be required to pollinate this tree, and each other.

When choosing a pear, you might also like to think about how the different varietals compare when it comes to taste, and whether you are looking for eating or cooking pears.

You should also consider whether you would like an early, mid-season or late season pear

Another important thing to consider is the rootstock of the tree.

Most cultivated pear trees are grafted onto Quince rootstock. The semi-vigorous Quince A and Quince C rootstocks are usually used in the UK.

Quince C is somewhat less vigorous and so makes for slightly smaller trees, so a pear tree on a Quince C rootstock could be the best choice for smaller gardens.

Where To Plant a Pear Tree

One important thing to note when deciding where to place new pear trees is that they flower pretty early, and so their blossom can be damaged by spring frosts.

It is important to choose a location that is not in a frost pocket, and which is as warm and sheltered as possible – especially if you live further north. It can be a good idea to position a pear tree close to or against a sunny south or west-facing wall.

Pear trees can be grown as half standard trees in gardens where space is not an issue.

Where space is limited, growing pears in bush trained forms, as fans, espaliers, pyramid or cordon forms can allow pear trees to be grown even in much smaller spaces.

Smaller pear trees can also be grown in containers, providing that these are of sufficient size.

When To Plant a Pear Tree

Pear trees can be purchased in pots throughout the year, but are best planted out in spring or autumn, when the ground is not waterlogged nor too dry, and the weather is not too hot.

However, it is cheaper, and often the best idea, to purchase and plant bare root pear trees during the dormant period, between late autumn and early spring.

Late summer/ early autumn is a good time to choose and order pear trees for your garden.

How To Plant a Pear Tree

Once your pear tree or trees arrive, plant out as soon as possible. Make sure you have prepared a suitable site for your new garden additions.

As with other fruit trees, you should dig a planting hole as deep as the rootball and twice as wide. It is a good idea to incorporate some compost and perhaps some mycorrhizal fungi into the planting hole to aid establishment.

Refill the soil then water in well. Add an organic mulch around the base of the tree and stake or add a protective collar if necessary.

Creating a Guild for Your Tree

In an organic garden, it is a good idea to create a guild of beneficial companion plants around your pear tree.

A well-chosen guild will help you keep your pear tree healthy, and boost the yields that you are able to achieve.

The plants in a guild are chosen because they confer certain benefits without creating too much competition for your new tree.

For example, around a pear tree you might plant:

Caring For a Pear Tree

Pear trees in the ground will need watering during dry periods until they become established.

After they are established, they will need to be watered only during prolonged periods of drought.

Replenishing your organic mulch around your tree, and creating a guild around it, and chopping and dropping plant material from this guild over time should be sufficient to keep your pear tree happy, healthy and productive.

If growing a pear tree in a container, you should scoop out and replace the top third of the potting mix every year to replenish the nutrients it contains.

Pears can be susceptible to a number of pests and diseases.

Making sure that you choose the right location for your tree, watering and pruning correctly, and ensuring healthy biodiversity in your garden can all help keep issues to a minimum.

But make sure you keep a close eye on your pear tree so you can deal with any problems swiftly if they do occur.

Standard pear trees should simply be lightly pruned to remove any dead, damaged or diseased branches in late winter or early spring.

Pruning specifics for trained trees will vary slightly depending on the form of fruit tree you have chosen.

Most pears in the UK will be ready to harvest sometime in September.

Pears are picked just before they have ripened fully. They should be swollen, yet firm, with a subtle colour change to their skin.

Pears that you have harvested should then be stored for a period before eating.

Early varieties will usually be ready to eat within a week or two. But later varieties may need much longer, even months, before they are ready to eat.

The tips above should help you understand the basics. Over time, you will learn more about your own particular pear tree or trees and the best strategies to employ.